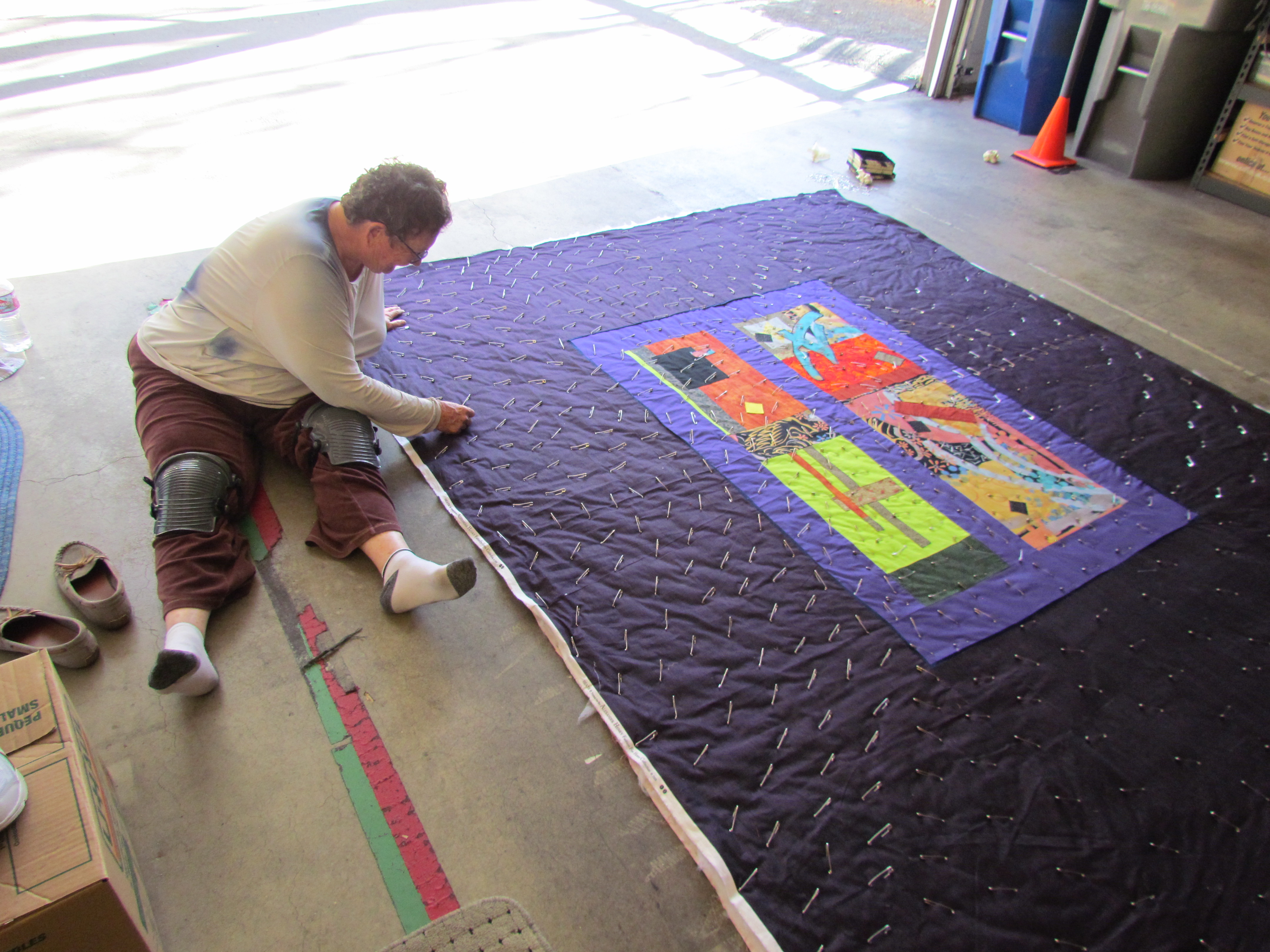 I’m almost leafed out. There’s only a three by three-ish area left for me to quilt. I was amazed that so much had gotten done. I’ve not been the most attentive quilter known to man. I’ve stalled as much as I can. I’ve put off working on it endlessly.

Only when George suggested that I work on it half an hour a day did I get back to work on it. Slowly it progressed. Perhaps there’s only a few half hours left to sew leaves now. Frankly, I’m much encouraged. Then trimming and binding to be done.

Much encouraged by a downtown hotel room too. SDG&E, our power company, is shutting the neighborhood down for a whole day. G did some online shopping and found a room by the bay at a reasonable price that had some great reviews. We are not to be without computer access tho. The 2 year old Windows 10 laptop spent the day updating itself yesterday. Today G has the ten year old Windows 7 laptop charging. I don’t have much in the way of hope that he can get that one going again.

(http://geeeee-zer.blogspot.com/>)Himself: Gaming, shower, get the oldest laptop working.
- Myself: Shower and leaves.
- Reading: Randall Garrett.
- Watching: To Catch a Smuggler Colombia. G likes this show.
- Photo: 2018, pinning the quilt.
- Weather: A few scattered high clouds. A cool 63F.
- Gratitude’s: That I don’t have to ever get down on the floor again.

Why the power interruption? Maintenance?
I love the colors on the quilt!

Yes, they are installing new transmission poles that run next to our condos.
Happy colors.

It, yay for progress on the quilt. Soon the leaves will be behind you. How nice to have a "staycation" at a hotel!

So much work goes into a quilt. They are definitely works of art.
I doubt my husband and I ever would have made one. Not that big of a flat clean place on the farm.
Best of luck on your day out. Best of luck in general.

What are the patterns in the quilt? The four in the center?

Such satisfying progress on the quilt!

Sometimes those big disheartening jobs need to be attended to by shorter and more consistent work periods. The quilt looks amazing and I love the photo of you working on it. I had a chance to have Windows 11 put on my new computer but I opted for Windows 10. I don't want to be the new guinea pig for all the Windows 11 glitches.

That quilt is beautiful