TS4: Rana & Patricia in The Sims


I am finding the doctor career infuriating but I’ve started it and must finish it. No matter how many tests you do it will never whittle down the diagnosis, you are always left with two or three options. I’m also finding that their symptoms don’t always match their illness. I’ve looked up the symptoms on several different sites (including the official forum) and they don’t match.

It’s frustrating when I get a diagnosis wrong because the game can’t handle keeping consistent symptoms with the illness. I’m on level 8 with Rana and she’s stuck there until another Sim is about to give birth. To get to level 9 she needs to deliver a baby. I haven’t even SEEN a pregnant Sim around town so I’m getting a bit bored with doing the same darn tasks every day.

I can’t say I’m not enjoying the game for the most part although I have some complaints, lol. I created a new Sim named Patricia who is black. I mostly play white Sims without really meaning to but that’s really stupid. SOC (Sims Of Colour, hehehe) are beautiful and I feel like my game could use some diversity for once. I haven’t had a chance to play her much yet.

First some more of Rana's story (you can read the beginning of her story in Sims 4 Again) and then you can see Patricia. I didn't realize how giant TS4 cell phones are. Rana went to call her boyfriend and I finally noticed. Rana when she was an RN attending to a patient. Rana decided that she was bored with her boyfriend, Travis. He didn't seem to mind so it was a good choice. I will say it seems Sims that break up will continue to act like they are in a relationship. Rana broke up with Travis then he kissed her passionately and wanted to hang out. I guess he didn't care that they broke up? LOL! At work Rana accidentally pulled a patient's heart out. But it's okay! She put it back and applied a bunch of glue to keep it in place. I decided her home needed an update so here is her bedroom. The bed is away from the wall so she can woohoo somewhere else besides the bush outside. That was awkward. Updated study. The washroom looks the same if you're wondering. Speaking of the washroom, I have a glitch where when my Sim is nude instead of the normal looking Barbie boobs she's covered in an ugly base game bra. She showers with it, bathes with it, and when roaming the house naked it's there. I don't know how to get rid of it. Apparently it's an EA glitch but they have not yet bothered to fix it. Now speaking of glitches; this RN Sim wouldn't get out of Dr. Rana's way so the game just let them occupy the same space. It's a bit creepy. I've sent Rana fishing a few times and this is the prettiest she's caught so far. It's a blue tetra. I love that Sims can just hang out by the pool. It makes it so much more functional. I directed Rana to read a book while she was outside. She changed into her swimsuit, sat down at the edge of the pool and then puled out her book. I think it's really cute. Dr. Rana at her job in her her specialist's uniform. Rana has a friend who has the Loner trait. When Loners get embarrassed they get the option to "hide from the world." They hide under the covers of their bed for about an hour. I thought that was super adorable. The poor little Sim was embarrassed! Summer and Rana at a bar on one of Rana's night's off. The bartender was a bit of a useless twit and he kept giving them bad drinks! None of my Sims are ever fully straight or fully gay because I'm not. So when Rana met a pink and blue haired girl named Candy I couldn't resist making them a couple. Your Sim can take photos of their lovers and the poses are neat (poses are different for friends and lovers, I think). I found that this pose was especially cute. A Sims 4 pigeon! So much cuter than the two pigeons from The Sims 3. There were two types in TS3, one from Night Life and the other from Pets. Neither of them is as cute as this little guy! 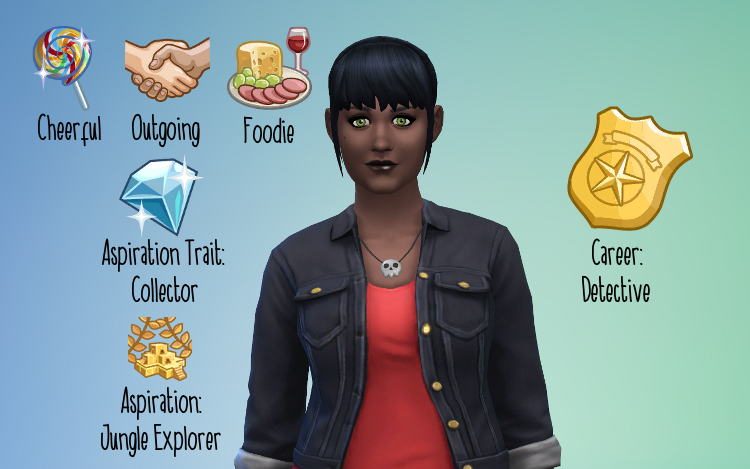 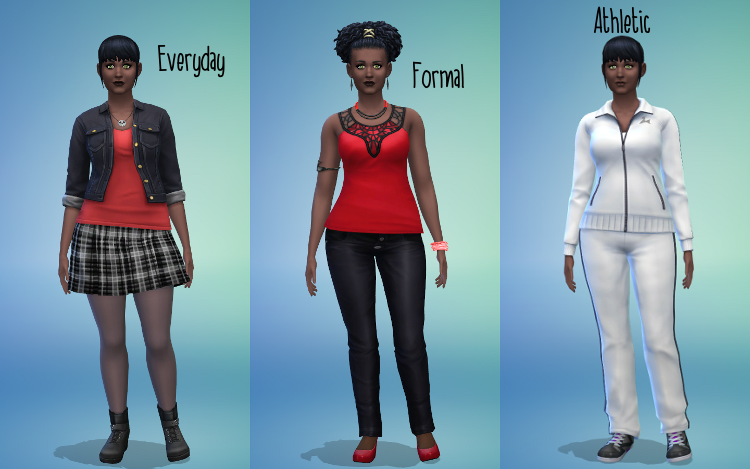 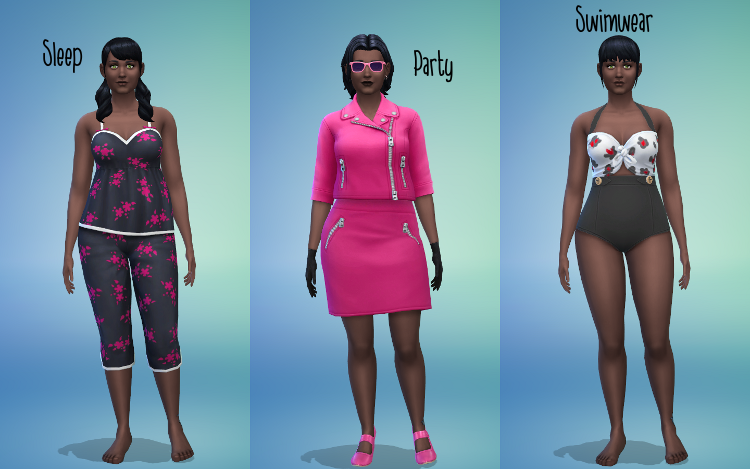 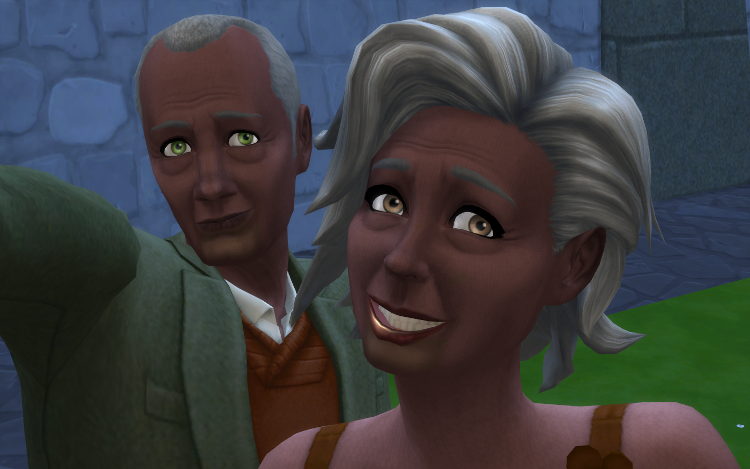 Pat's home in the Old Town District of Windenburg (town that came with the Get Together EP). It's called Havisham House and did a lot of redecorating to the seemingly abandoned lot. 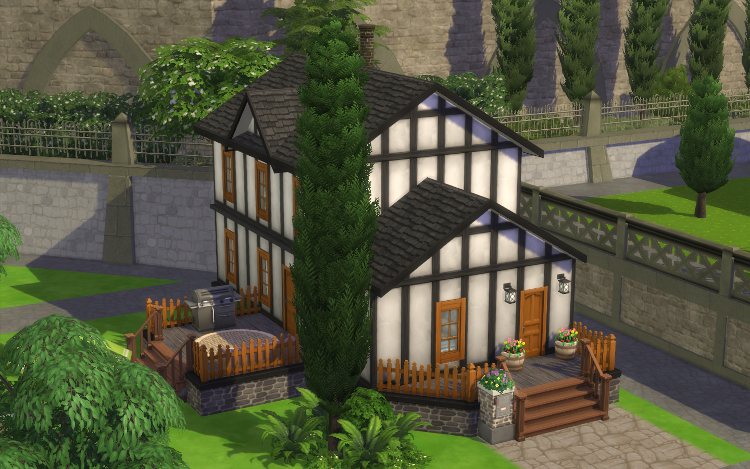 The living and dinning rooms taken from the kitchen on a completely open concept house. 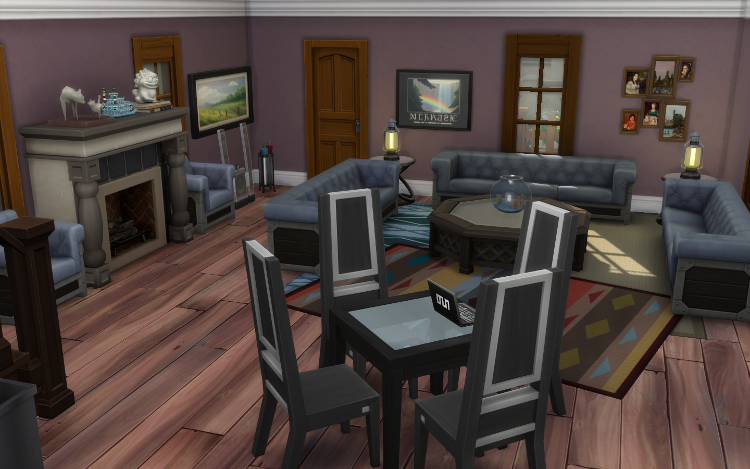 The open concept upstairs with a lounge and bedroom. 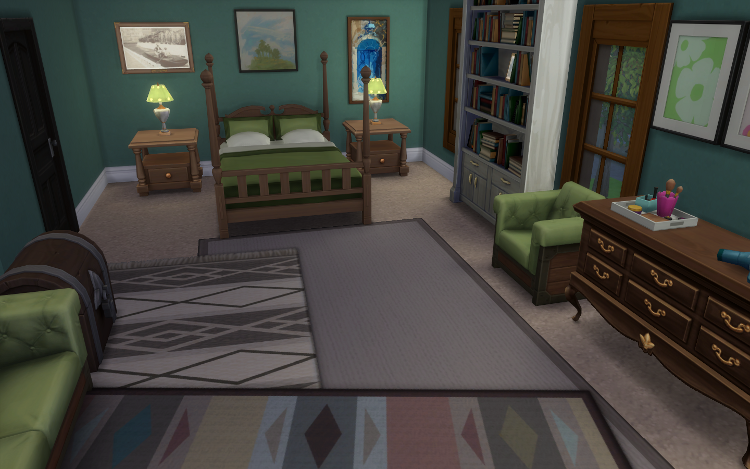 Patricia and her longtime girlfriend, Maaike. 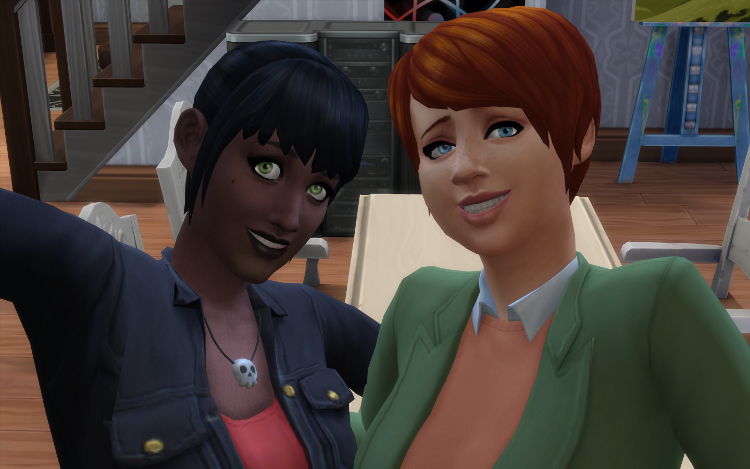 I sent Pat to go to the washroom and added calling a friend to her queue (you can line up tasks for your Sims to do). Instead she went pee WHILE she talked on the phone. LOL! 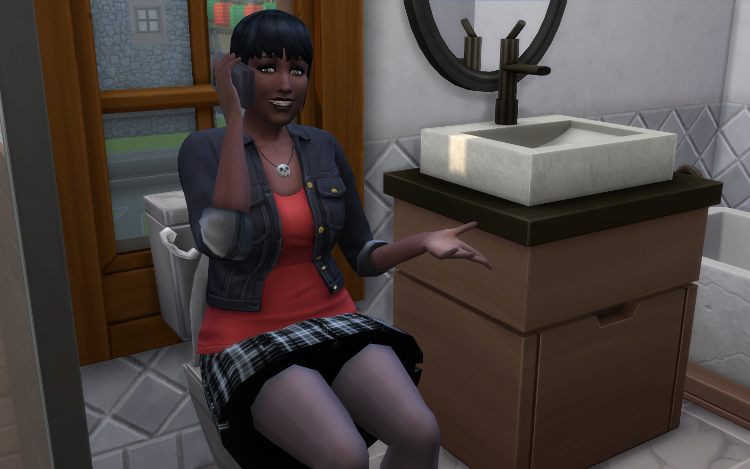 View from Patricia's upper level. It's a quaint little area. 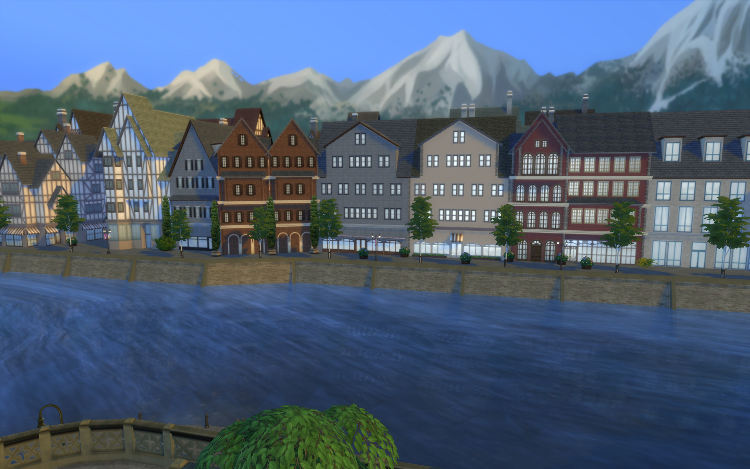 Patricia meets her first ghost on the Von Haunt Estate.