I’m not sure how serious I am being trying keto, but. Well, here we are. Less a challenge, more an experiment. This isn’t the first time I’ve tracked calories to drop weight. I recall that stint, over the course of 8 weeks, I dropped roughly 2 lbs a week. A healthy amount to gain/lose a week is, in fact, 1-2 lbs a week.

I know some people are skittish about calorie counting, as they become obsessed with weighting things. I don’t weigh - I estimate. Thing is. If I don’t count my calories, I end up severely undereating.

I’ll just… not eat for protracted periods of the day. Sure, intermittent fasting is a thing, but my calories were too low.

So, setting a calorie “floor” ensures I don’t frakking starve myself.

Why keto? Dropping carbs is an easy way to limit calories. And since I want to drop weight anyway, might as well experiment and see what happens. I’m curious whether this will help with my sugar cravings at night. I will eat dinner, and then an hour or two later, I will crave sugar. Any sugar. I’ll gorge chocolate. I’ll drink sooooo much milk. (I’m lactose-dependent, har har.)

My “training age” is too high to simply do the exact routine I did then. So, I’m using the few brain cells I have left. The style of the metabolic workouts was alternating an upper body lift with a lower body lift, with progressively lower rest periods in successive weeks. So, say, a squat paired with push-ups, 90 seconds rest between exercises, progressively down to 60 seconds between exercises by the end week. Blood shifting from the upper body, then to the lower body. Then back again. Phew.

It kicked my ass. And the knowledge of that, well. It’s almost easier doing a routine when you don’t know just how much it’s going to kick your ass. So, doable matters more than efficiency. Won’t make progress on a routine you won’t do.

So, I’m going to just superset lunges with my main upper body lifts. Without getting into details, this has added up to 156 lunges per session. If 156 lunges per session, twice a week, doesn’t do SOMETHING, I’ll be surprised. (My hips already feel more mobile.) I’m sure I look weird to the groups of bros (why in packs of three?) but whatever. They have tiny calves, tiny thighs, and tiny butts. 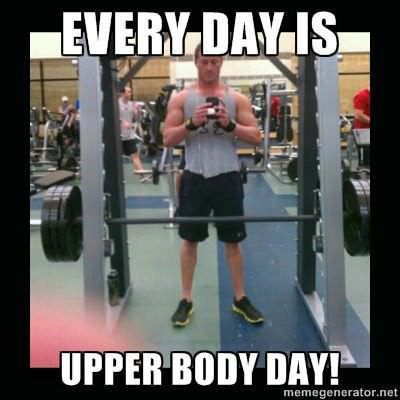 The chicks at my gym have some seriously nice wheels, though.

Maybe years ago, I would have thought of exercise as “burning calories” while in a cut. Or worse, that you can build muscle while dropping fat. Instead, I’m taking a mindset that lifting is for preserving muscle. Body will preserve what it uses. At the same caloric deficit, someone who lifts will preserve more muscle than someone who sits on a couch.

To that end, I’m doing two metabolic workouts, an upper strength, a lower strength, and at least two cardio sessions a week. So M/C/M/C/U/L/R or so.

As an aside, I hate cardio, in part because I’m not good at it. But already a few sessions of cardio in, it doesn’t feel as much like death. Won’t forget that I completed C25k. (Couch to 5k - I successfully jogged 3 miles without stopping. No competition, just me jogging around the block at a snail’s pace. But, I did do it. Being strong is just one facet of fitness.)

Anyway, not rereading myself. Google-fu says it takes 3-4 days for the body to adapt. Definitely felt groggy and sad the past few days. Decided to stick it out and see what happens. Maybe it’s just not eating sugar at night, but my sleep has been improving, with last night being the best so far. Mood is good today.

And overall sense of hunger?

Like, it’s nothing compared to the hunger gnaws I would get when I was eating 1200 calories and eating carbs. Oatmeal for breakfast, eggs for lunch, sensible dinner.

My default now is spinach eggs for breakfast/lunch, and meat with some green vegetable for dinner. Pretty much my only snack is string cheese. (1c, 6p, 80cal) I do track it. Gosh, I’m close to a “Chicken And Broccoli” challenge, but eh, I can’t eat broccoli constantly. Spinach, yes. Milk intake is slashed. (11c, 8p, 150cal per cup) Like I said, I can guzzle down moo moo. Mmm. That’s the kind of creamy white stuff in my mouth I like to swallow.

Fun fact: I’m not really into bacon. I know some see keto as an excuse to pound down bacon, but it’s not for me. Ground pork, though, is pretty tasty. 1/2 lb, provolone, and a bit of mustard on top. Ha ha. Hence why my spinach intake has gone up. Gotta have fiber.

What’s the plan after this cut? Keep counting calories and figure out what my maintenance is. Compare someone sitting on the couch at zero net calorie surplus, to someone kicking their ass in the gym who also is at a net zero calorie surplus. It’s difficult to explain G-Flux, but it’s better to exert yourself more and eat a little more, than it is to eat less and move less.

Anyway, my weight on 1-1-22 was 171.4 lbs. Nothing crazy, but well. Almost all of the distribution is around my waist. And that correlates with a higher risk of heart issues down the road. Would like to nip that in the bud. After all. Dying is the leading cause of death, and I’d like to avoid dying.