We Agnostics. in Whey and Sonic Screwdrivers.


Oh, I’m still atheist. That is a chapter in The Big Book. I figured it would take a while to find my rhythm in terms of when/how many AA meetings I would attend weekly. Considering my work schedule has leveled out to 5-6 nights a week, I’ve been trying to hit noon meetings whenever I can.

There’s going to be stigma no matter how I write, so I better try to get past it. Isn’t it strange how the media portrays someone going into rehab* as if it is a bad thing? The person is doing something positive for themselves! As if we’re supposed to be “strong enough” to maintain a bad habit without it being too far. It’s like making fun of a fat person at the gym, despite them actively doing something to make themselves healthy.

*No, no rehab for me, just using it as an example.

Anyway, this week’s reading has been part of the agnostic chapter. Sure, they are words on the page regarding how AA is not affiliated with any religion.

But, never know what humans will do with those words. Now, part of my hesitancy with AA has been horror stories about the religious overtones. No doubt this exists. I remind you that I live south of the Mason-Dixon Line.

Haven’t sensed bigotry or religious zeal. I think I lucked out.

The matriarch/landlord likes to mention how her sponsor is atheist, and she learned a lot from her. I know there’s at least one open agnostic in the group.

Tangent: I find it interesting how there is even a word for atheist. I posit the atheists didn’t name ourselves. Rather, we were named by the religious. Do you identify as apastrafarian? Of course not, because most people don’t think about the Giant Spaghetti Monster.

As in, we’re all void of theism by default. We have to be indoctrinated or otherwise discover these concepts from fellow humans.

Oh, at least one of you will appreciate this. Keeping my comments brief, I quoted Monty Python and the Life of Brian. 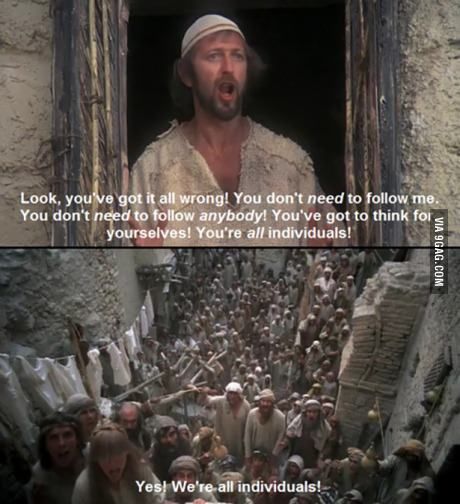 I went into AA taking the Twilight approach. As in, I couldn’t form an opinion until I at least exposed myself to enough content. I don’t think AA solely helps you. I will surely have some commentary if I dare tackle the steps, as you know what an analytical mind I have.

It’s not about the steps, it’s not about the book. “The sole requirement is a genuine desire to stop drinking.” That’s it. That’s all. Having a community of people who just “get it” is powerful. We all need our tribe.

Heck, tribalism is probably how religion started in the first place, but I digress…

In general, when someone gets a new coin, they’re asked “how’d you do it?” Most seem to reply “one day at a time”, referring to the first 24-hour coin. Yesterday, I said “balance.” Because prior, I was living day-to-day. Hour-to-hour. Not so much anymore.

I could take a week off from meetings and be fine. After all, I’m taking the week off from the gym due to injury and am far better mentally than in years past.

No one thing should overtake your life. That includes actively thinking about not partaking in your vices.

If you constantly think about not thinking about the game, well. You just lost The Game. (…Sorry, but it’s true.)

Balance. These little meetings help tickle that social bar of mine. Let’s face it: work socialization isn’t the same as more casual things. I don’t mingle much at meetings before/after, but I’m feeling more comfortable. Remembering more and more people. Still haven’t picked a sponsor. Entirely possible I never will.

I also noted that this checks off my internal goal of “read more”. Because there is generally reading most meetings. I am amused at how grown adults struggle reading just like we did in grade school. Nobody cared then if you don’t know how to say a word, and nobody cares now. Pretty neat.

Anyway, some unspoken words. If you talked to me long enough about my philosophy of spirituality, you could argue there is some agnostic in me. However, so long as I have balls, I figure why not put them on the table and declare THERE IS NO GOD. Otherwise, what’s the point of having balls unless you test them?

As I said in the meeting, I’m okay being wrong. And if I am, I’ll update my mental database.

I was in Al-Anon for several years, and being an atheist in a bible-thumping area (which bled into the meetings sometimes) made it a bit difficult for me at times. But when I took it for what it was and worked it how it worked for me (like replacing "Him" in my mind with "Higher Power"), there was so much good shit. I'm glad you're finding your own good shit in there.

I'm currently in a state of "But I am the higher power! I manifest me and create who I am!" So. Will need to mental gymnastics my way around. Or forget it was a thought and start somewhere else.