Took 2mg melatonin, 1 zzzquil, 1 benadryl, and 1 nyquil. And I STILL wasn’t drowsy at all.

Maybe when I get around to showering, I’ll find the impetus to get to the gym. What? I’m not going to be the dirty guy at the gym. And the physical activity will make me more physically tired.

Yesterday marked a third day of being mostly off social media. And yet I don’t feel lonely. It’s weird. Correlation doesn’t mean causation, but my mood has been slowly rising. When I constantly think about “gee, how DO I feel?” my mood ends up going downward.

Moreover, whether it’s youtube or netflix, I sometimes get these ideas of OOOHHH, I GOTTA POST ABOUT THIS. And so rather than fully absorbing myself in content, there is a break in the flow. My brain gets side-tracked, and I start thinking. Video media ends up being zoning out. Whereas if I just sit and absorb, it is a bit more zoning IN.

Media is best when you turn your brain off a little. Or, at least focus on the media at hand.

I accidentally marathoned the entirety of “Ginny & Georgia” on Netflix yesterday. Maybe if I did one episode a day, it would be okay. But there are so many characters and plot threads, I feared that if I stopped, I’d have to spend the first five/ten minutes of each episode trying to remember “Okay, what is going on? What happened in the last episode?”

Some shows are fine being week-to-week. Star Trek: Lower Decks enthralled me. First episode establishes all eight primary characters in an easy 28 minutes. Then again, episodic television. Breaking Bad is serialized, but I would probably be okay if I saw it at-release once a week. Though, when I went through it, I’d do a few episode chunks at a time, generally stopping at the end of each season.

And then there are the first two seasons of Star Trek: Discovery. Wife and I would watch one a day. And in each subsequent episode, I was still so utterly confused. You shouldn’t be two seasons in and not know the names of characters, nor be confused as to where the storyline is going.

At the BARE MINIMUM in storywriting, if there is a conflict, there should be some binary option that goes through your head. Will she choose Team Vampire or Team Werewolf? Simple! Reminds me of an episode of Star Trek where there’s an energy displacement wave, and their logical action is to give more power to the shields. The solution ended up being that their OWN shields were causing the displacement wave to amplify. And if you wanted to, a third option could be the answer, but that ONLY works if there are hints of precursors of it that might fly under your radar and then make you go OH I FORGOT ABOUT THAT. I love those. Things there all along that you didn’t consider.

(I’m bad at that kind of writing. I prefer to be more obvious. Hate authors that are so convoluted that you need to google “What the hell happened?”)

JJ Abram’s “mystery box” style of writing is a fancy way of saying I HAVE NO IDEA WHAT I’M WRITING AND NONE OF THESE MAKES SENSE the solution is everyone gets a puppy. The end. Okay, it’s actually dropping someone into a story mid-mystery and trying to solve it in both directions. But you need to PLAN IT for it to work. You could easily argue Ginny & Georgia has similarities to this, as it utilizes flashbacks for the watchers to see more backstory. What IS going on? What DID happen? What WILL happen?

But. Isn’t that almost every episode of Star Trek TNG? They enter a solar system. They wonder “What happened here?” Then they have interactions, and find a solution. Heh, I’m probably oversimplifying - I refuse to explore more, as I have VERY mixed/negative feelings about the man.

You’re not doing anything new, dude. At one point in anyone’s writing career, they will have a backstory in mind that hasn’t been revealed to characters nor the reader yet. That’s why you can start with Star Wars IV. Who are the Jedi? It’s back there. Where did the Empire come from? Oh, it’s back there. Who is this Gandalf rip-off? Oh, more backstory.

I seem to really enjoy media that successfully employs Chekhov’s Gun. For the uninitiated:

Chekhov’s gun (Russian: Чеховское ружьё) is a dramatic principle that states that every element in a story must be necessary, and irrelevant elements should be removed. Elements should not appear to make “false promises” by never coming into play.

The term ‘Chekhov’s Gun’ comes from something Chekhov allegedly said in the 1880s (it was noted down by Ilia Gurliand): ‘If in Act I you have a pistol hanging on the wall, then it must fire in the last act’.

Of course, I don’t think it necessarily needs to be Act I. Nor specifically a pistol. Though. I’m on Season 3 of Good Girls. The husband has bought a gun. It has been referenced twice. That means the third time we see it, following the Rule of 3, and Chekhov’s gun, it should be fired at some point.

The “rule of three” is based on the principle that things that come in threes are inherently funnier, more satisfying, or more effective than any other number. When used in words, either by speech or text, the reader or audience is more likely to consume the information if it is written in threes.

Now, this isn’t to say you can’t have character traits. But why write a major trait unless you’re going to use it? Chekhov’s Gun. This is why Commander Troi is considered a badly written character. She has a trait of being able to sense others’ emotions, and then suddenly… 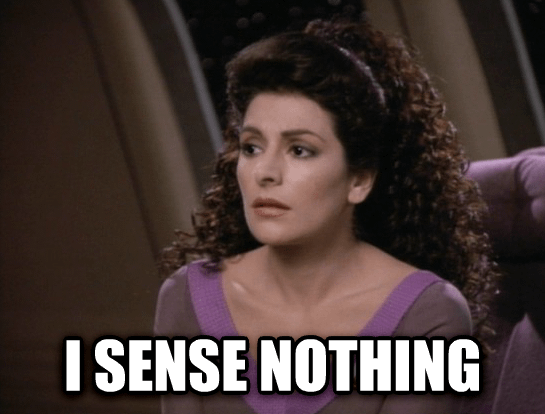 Commander Troi has value in other facets, but geez.

In other words, Chekhov’s Gun is a reliable storytelling method. Set-up? PAYOFF. Even if it is something so mundane as a one-liner from a character bemoaning “I could really go for a taco” and then in the final act the character is rewarded with a taco. Geez, look at Harold and Kumar GOTO White Castle. They establish they want White Castle. They go on an adventure. I think we would be a little pissed if they didn’t get White Castle unless there was some really clever twist that made it satisfying. (Doubt it. Their holy grail was simply The Quest for White Castle.)

To the JJ Abram’s hard-on for the Mystery Box style of writing, I say unto thee: 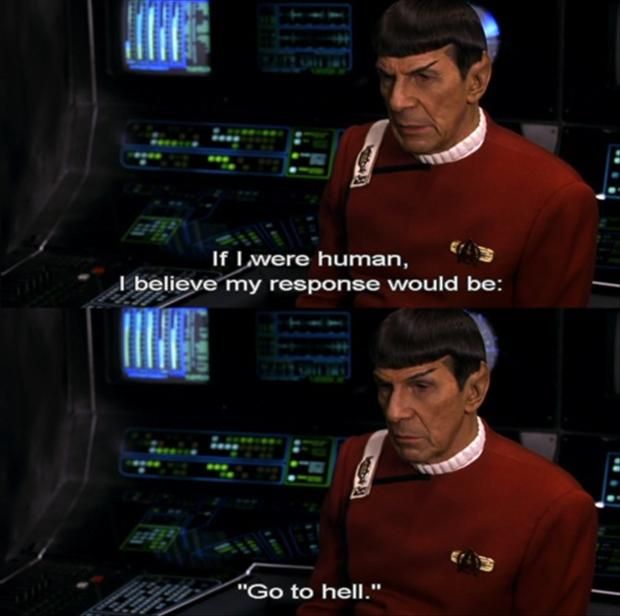