Emotional Exhaustion from Work in Reconstruction

No wonder I don’t do well alone.

Get in to work. E-Mail is flooded. FUCK! What happened over the weekend?
“We’re having sex. And we were having sex. But then I didn’t feel like having sex. And he said he was almost done, so I said fine, but he wasn’t almost done so I got tired and told him to stop and he didn’t.” Officer writes in his report, “I don’t think this is chargeable as a crime”. Boss says we aren’t charging this as a sexual assault. And here’s the problem from my end: I don’t have enough energy or fight to care. I’ve reached the point where “Good, fuck it. One less thing I have to worry about!” is my present response. Because I have too much going on professionally to give two shits. YEAH… if we weren’t so far behind the 8 ball because of COVID, maybe things wouldn’t be this way. But folks? I have FOUR more jury trial dates this year for STILL over 1,000 different cases. Not to mention my Magistrate or Juvenile docket!
I.
DO NOT.
HAVE TIME.
to fight literally everyone else’s battles right now.

AND… I actually have to be IN COURT again today (because fuck social distancing or viral protections) for Juvenile Court. So everything else that needs to get worked on gets put on pause.

9:00 a.m. Charged a 15 year old with violent conduct. He says, “Bullshit, no way I’m getting snitched on.” Well, you’re a 15 year old kid who tried to beat up a 32 year old man. The 32 year old man ABSOLUTELY gave us a statement and is on board with you facing some bloody consequences. BUT my office fucked up and didn’t properly notify the witness. GRUMBLE. Continuance.

9:30 a.m. Small child was permanently removed from her parents due to their active abuse. How’s the case going? She in a better place? All of this could have been taken care of by filing a report instead of doing an in-person hearing? Thought so!

10:00 a.m. Children who have been in Iowa for 1 year. Mom is on meth. Out Of State Dad is a douche. We could have done something today… but, to be an extra SPECIAL douche, Out of State Dad filed for Counsel at the literal last moment. SO… this has to be continued for procedural reasons.

10:30 a.m. SUPPOSED to be resolved on paper. But both clients are here. And neither attorney. Nor an interpreter. SO.... wtf. Let’s wait until 11 to see if anyone shows up.

11:00 a.m. NOPE, and apparently (as happens so fucking often) these two adults can’t behave like adults when it comes to their children… so now they’ve bickered and argued each other into a miserable spot, where nothing the state does CAN protect these children unless we literally and physically remove the kids from their parents.

11:15 a.m. Finally back at my desk until my 1:00 hearing! I have 45 new e-mails, two new voicemails, and 4 more cases that need immediate filing. BUT instead my secretary sends me a phone call.
THAT TOOK UP THE NEXT 45 MINUTES.
A guy was assaulted last night. Okay. Did the guy go to the police. Yes? Then why is he calling me. He doesn’t trust the police? He thinks they won’t file anything? He wants justice because this lady gets drunk and fights people and nobody does anything about it? Well, SURE why don’t I get NOTHING done for the next 45 minutes while you go on and on and on and on about how you don’t trust the police, you think this lady’s whole family is a problem, you want justice, it isn’t fair that you’ve been to jail before if this lady isn’t even going to get charged with something… it was a fucking therapy session where I was the therapist! NOT MY JOB, SIR. Call the police, if they don’t act? I can’t really do anything about it right now. Again, if we weren’t so far behind the 8 ball because of COVID, maybe things wouldn’t be this way. But I have too much going on professionally to give two shits.

12:30 p.m. Huh, just realized that I don’t know WHAT is going to happen at my 1:00. We’re not looking to put the kid in jail; we just need to modify his programs as he took a giant leap backwards and returned to violent and defiant behaviors. I need to quickly review this case so I have some room to argue if we run into trouble.

1:30 p.m. Defense Attorney called back. He hadn’t been alerted that he’d been assigned the case. Had no knowledge. OOPSIE. So we’ll just chat over the phone and figure out when we can get this mess sorted. Not to mention… some of the charges the Judge thinks aren’t legally applicable, even though the Iowa Department of Criminal Investigation says “this statute is legally applied as follows”. SO… that may be an interesting, potentially intense case… IF IT EVER HAPPENS.

2:00 p.m. Catch up on E-Mails, Voice Mails, and Filing.
2:30 p.m. Phone Call “I live in Texas but I want to live in Iowa. Can you take me through the legal things I need to do?” NO. How… why does this even strike people as acceptable?? “I have a legal question”… okay, talk to a lawyer… you’re a county attorney, you ARE a lawyer… 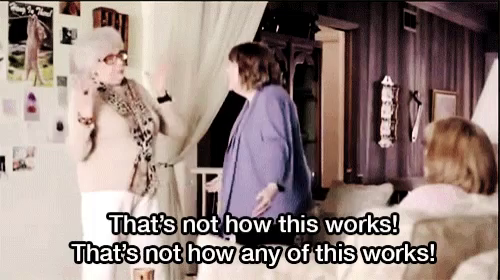 PARTICULARLY if it is something you could find out through a GOOGLE SEARCH! FUCK I may be cheap, but my time isn’t valueless, people!

2:45: Doomtalk. Boss and I look over the trial schedule for the rest of the year. The panic is palpable and the anxiety is causing me a mild panic attack. Honestly, there is quite literally too much work to do. Not just “hours in a day” but days in our schedule. We have District Court, District Associate Court, Magistrate Court, and Juvenile Court. As for Jury Trial Dates?
October 20 (District Trial) November 12 (District Associate Trial) December 1 (District Trial) December 3 (District Associate Trial).
SO… background. District Trial is anyone with an “A”, “B”, or “C” level felony. Violence, Sexual Assault, Heavy Drugs. District Associate Trial is anyone with a crime between “C” felony and Simple Misdemeanor… meaning “D” Felony, Aggravated Misdemeanor, or Serious Misdemeanor. Meaning almost all of your violent cases, most of your sexual cases, and most of your drug cases. IN OTHER WORDS… we currently have 8 months worth of cases, and the ability to only try FOUR OF THEM. This is… a huge problem.

3:00 Phone call back
So, what can I help you with?
“I want to talk to you about the boy that raped my daughter.”
I think you want to talk to OTHER county, they have that case.
“He raped her in your county too. You’re not doing anything about that?”
It… isn’t in our system. And I spoke with our coordinator today and none of us have been informed.
“Then you need to get informed. My girl was raped all over Iowa and I want justice.”
::sigh:: ::swear under breath::
PEOPLE… I am SO SORRY that my office can’t be your work around to the police. I’m SORRY if the police are fucking up. I REALLY AM. I ACTUALLY MEAN THAT. But I’m buried up to my eyebrows in work right now. I cannot drop what I’m doing to babysit the police. I have to work on my (quick count) 2,582 cases that must be resolved by December 17th!

3:40: E-mail from Defense. The kid that was screaming “I’ll murder you. I’ll murder you all” while he was beating the crap out of people has “significant mental health issues” so needs to be somewhere besides jail. TRUST ME, I KNOW THAT. Would you like to go ahead and whip up the funding we need for a better place for him?? Because I’m not going to just RELEASE HIM because I have to consider Community Safety. I know that keeping a mentally unwell person in jail is not a great place for them. If we could get him proper therapy, medicine, behavioral modification, etc… I’d love to! But right now? I’ve got a jail, a detention facility and that’s it.

So after all that?
No wonder I don’t do well alone.
If 100% of your interaction with people is criminals, attorneys, the irresponsible, and the argumentative… honestly? You develop a need to interact with people who can communicate and demonstrate compassion, honesty, responsibility, and compromise. One of the primary psychological pushes for me towards Get someone in your life is the fact that I need my world to be about more than this. I need… love and joy and happiness and playfulness and… all of those things that make the world a better place. Going from “heavy, soul scarring legal work” to “Hey, you’re by yourself. Get your chores done then get to bed so you can do this all over again!” It just… it feels hollow. It feels pointless. It feels unsustainable. I genuinely want more in my life. I want more than other people’s pain and other people’s crimes and other people’s bullshit as the primary elements of my life.

First time reader here. What your doing sounds hard but getting those kids to safety must feel good. Good luck x

Thanks. Each portion of my legal career has had some silver lining. Whether it was Private Practice (which I hated) that helped me protect and rescue human trafficking victims; or what I'm doing now where, last year, we saved a kid who was being actively abused and malnourished. Sadly this year, as has been true for everyone, has been rather strongly lacking in good news stories.

You definitely need to have that balance of goodness vs darkness in your life. I hope you can continue to spend time with others that help lift you up.

Definitely! One of the reasons I think the confluence of 2020 is kicking my ass. This job plus Divorce if I could have seen friends and family and kept my international trips? NO PROBLEM. You guys would have had to ask if I'd been processing the divorce at all! As it is? That... hasn't been the case, lol

I totally understand. The circumstances are trying for anyone right now let alone those going through something like you are. Hugs.

I don't know a damn thing about how law offices / prosecutor offices work, but I'm regularly shocked that these clownshoes people have access to you AT ALL. Like, shouldn't there be a paralegal or legal secretary with a backbone screening out all these loonies while you do Real Work?

I would tend to agree but for the rather shoddy way Rural County Offices run. For instance, in Tiny Town? I answered my own phone and didn't even have a secretary, really. (Technically, I did but she had to do a large portion of her own work that made it harder for her to do secretarial stuff). Here the "screening process" is limited mostly to, "What is your name? Do you have an attorney? Okay, let me connect you." One of the reasons why, when reading a writer here that is a receptionist for a law firm, I'm always blown away and complimentary at her gatekeeping... because it is damned important.