Dreams and Disasters in Reconstruction


So… I don’t know what happened.

On Sunday night, I went to bed around 10 or 11. I was cognizant enough to know exactly where I put everything (glasses, clothes, etc.) AND YET......
At some point, I woke up and turned my alarm off and fed the dog. Without knowing it. Because the next thing I honestly remember is waking up to “The Adventures of Gumball” on TV and thinking “What time is it?” It was NOON. So, I called in to work. Obvs. And slept off and on throughout the day. And into the night. And had shitty nightmares (I’ll detail) and woke up at 7. And wanted to go back to sleep. So… something is definitely up.

LAST NIGHT’S NIGHTMARE!
It was Christmas and I am the age and appearance I am now. Which was strange because we were at Gma Lois and Pappy’s house… and even if they were still alive (they aren’t) they haven’t lived in that house since 2003. The family left the Christmas celebration and went to the mall (proof of dream; you couldn’t force my father into a mall in December). As we were walking around, I saw a really good friend from high school (a beautiful Vietnamese girl who is a professional journalist) trying on various wedding garb. She was helping a friend in a fashion show (something she honestly used to do) and they were doing a Cultural Wedding theme… Phong Kim would wear a Western Wedding Garment than come out in something traditional Vietnamese. I was so interested in this that I lost my family. So, in a panic, I went searching for them. Trying to find them. I couldn’t. I stumbled onto an Ice Skating Rink and someone said, “I saw your family, they’re right over there!” Instead of going around the rink, I just barreled onto it. Walking on the ice toward where they pointed. As I got closer, though, I did see my family. From when I was NINE. My twin cousin looking as she did back then; my father looking as he did back then. And even though to me I still looked as I do now, with all the memories and experiences and gray hairs… to everyone else, I looked as I did when I was 9. At that moment, as life continued with everyone treating me like I was 9… I became obsessively anxious. (1) How can I change things for the better without mucking up too much of the timeline for everyone else? BUT worse… the thing that was driving me.... like in a bad romcom movie sense… was that motivation of “Have to get back to the woman I love.” Which… in the dream… was Nancy. Like… I was nine. That meant it was 1993. I had no access to e-mail and no cell phone. I had no way to contact her, to return to her, to get back to her. And that was a central motivation.

So… strangely… that nightmare got me waking up angry. Because… I’ve always wanted to Time Leap. I know the exact date that I’d send my consciousness back to. Friday, June 8, 2001. Too late in the time stream to alter any primary developmental struggle or success. Early enough in the time stream to avoid my most painful, violent, and traumatic relationships. 17 years old. Able to drive; owner of investments, a bank account, and a checking account. But not required to pay bills. College, law school, and marriage all in my future and not my past. THAT is when I’d go back to. Anything pre- 1995 is far too risky. So there’s that layer. But more so? More irritating and aggravating? The damned romcom motivation. Not only is “Have to get back to the woman I love” just shitty and hackneyed writing for a sci-fi time travel narrative; my brain wasn’t even kind enough to INVENT someone for that role. Emotionally and consciously… I would never forsake a time travel experience for Nancy. Even when we were still married! Now? Fuggetaboutit. I’d actually welcome the time travel experience to undo all the time I wasted on that. So congratulations nightmare. Instead of inciting fear, sorrow, or panic… you just pissed me off.

Now… I got to work thirty minutes after start time; I’ve gone through my e-mail; filed a bunch of things and… but for Thursday Prep, one voice mail, and one phone call? I’m already done for the day. Yeah. Two days worth of work and… finished in 90 minutes. GRANTED if the courts were open, that would be different. But it just… continues to underscore the ridiculousness of being made to come to the office for political reasons. And yes, they are political reasons. Our local government has gone No Mask, No Social Distancing, No Pronouncements to the Public on COVID. No wonder nobody knows how bad it still is! Fucking. Crazy. So yeah… I’m going to keep wearing my mask, keep social distancing, and only socializing with people from OUTSIDE of the county that I know are also wearing masks and social distancing!

I’ll end this in a rare return to an old practice. Sharing memes. But these are “THEY LIVE” memes where the meme is meant to speak the truth behind the statement. 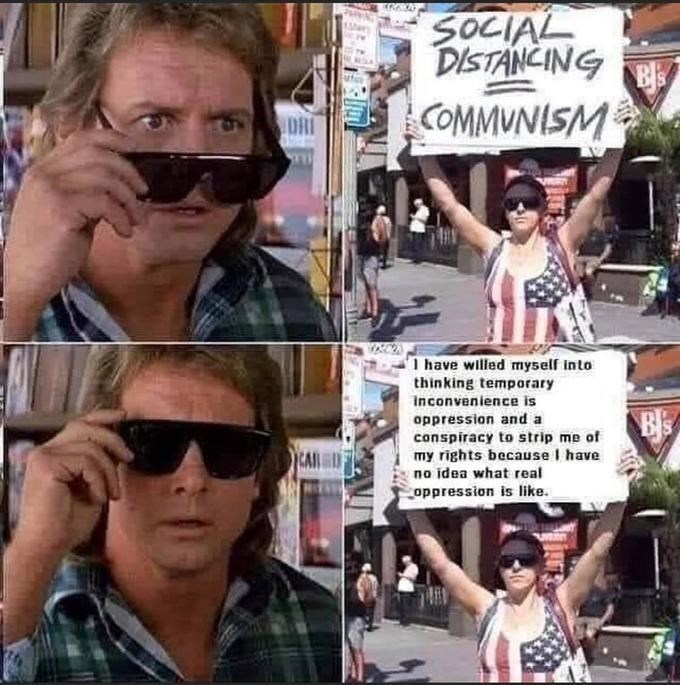 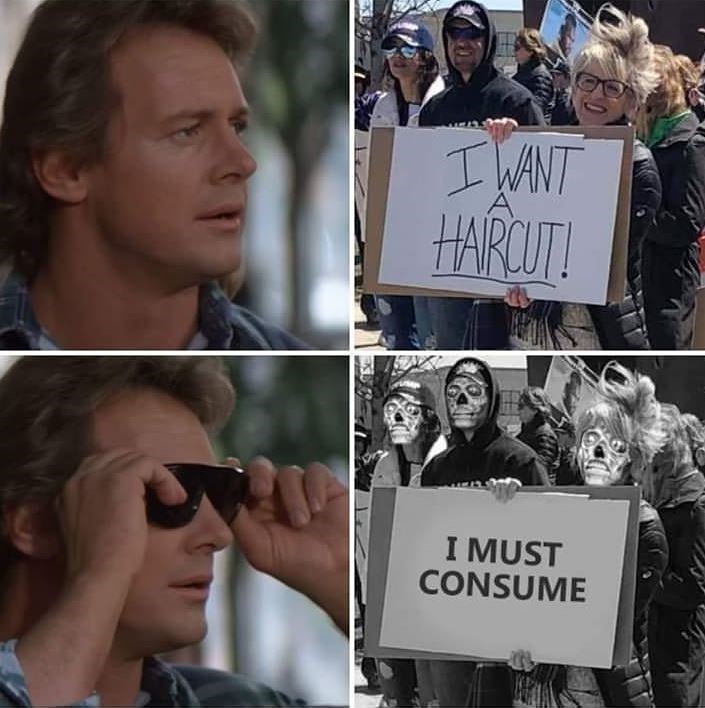 Holy weirdness!! Hope you're ok. I used to sleepwalk but haven't done that in years. If I did it now, it would freak me the hell out!
Crazy dreams... I've had some like that too. So disorienting.

I have that movie on laser disc! LOL