Yes. No. Maybe. No.* in These Foolish Things


I’m jamming fast at work this morning because I had an appointment to get my botox injections this morning and I fibbed to my boss that I had to go to the doctor to have more blood drawn (which is kind of true since I’m still on aspirin and that thins the blood and makes me bleed when I get botox, ha!)

But I had to come on quickly to tell you that Date #2 with Frank was a BUST!

I am so disappointed!

Quickly, he picked me up at my place and that was really nice of him, but on the way to the restaurant he noted aloud, “I’m glad we’re not arguing!”

And that kind of set the tone for the whole evening. I thought it was so, so strange that he would even bring it up, but I’m thinking that maybe it’s a character flaw that he knows is an issue?

I had suggested dinner at this really tiny, sexy spot because I thought he’d dig it since I was thinking that he was a “foodie”…you know, with his map plotting and all of that. He creates lists and maps of his favorite restaurants and bars and such.

As it turns out, he didn’t get the place at all. He didn’t understand the small plate sharing or the ironic music (80s Rock, which was awesome, by the way) or the eclectic decor, which is surprising as he was a homebuilder for many years. He literally looked puzzled and clearly HATED the idea of sharing plates with me. So weird! He was also completely awkward with ordering and seemed to close his eyes and punt with his drink selection and seemed a little embarrassed when I made suggestions. And how could he not totally DIG this place??!

It only went downhill from there because he argued with me during every twist of our conversation. There was nothing I could say that he didn’t want to argue about - even asking me if I wanted to WAGER on something at one point!

Finally, at the end of our meal I brought up the fact that we seemed to clash, and he shut his eyes and dramatically stated, “Yeah, I knew this wasn’t going to work out.”

WHAT?! God, that’s not what I was saying, but…whatever!

So, we got things smoothed over a little but not really but neither one of us really wanted the evening to end for some reason (both lonely???), so after dinner we moved to the bar to have one last drink. I was thinking about the fact that he’s a Saggitarius and I’m a Scorpio and according to astrologers, our compatibility is supposed to be totally amazing in bed, so I got the idea that, hey, I know we’re not going to be a couple, but here’s a guy who could be fuckable…why not?

He drove me home and I invited him in. I poured him a drink and we sat on the sofa for a minute and we kissed, but it didn’t move me at all. He wanted to take it to the bedroom, but I was hesitant, so he stood up and took my hand and put it on his crotch.

Guys. I felt nothing. NOTHING. I don’t know what the hell that was, but I literally felt fabric and air and it was so weird that I was like, EVENING OVER. I GOTTA GO TO BED. NOW (without you).

I sent him home and fell into my bed - just me and the dog - again.

Update: He just sent me this text. WTF? How do I answer: 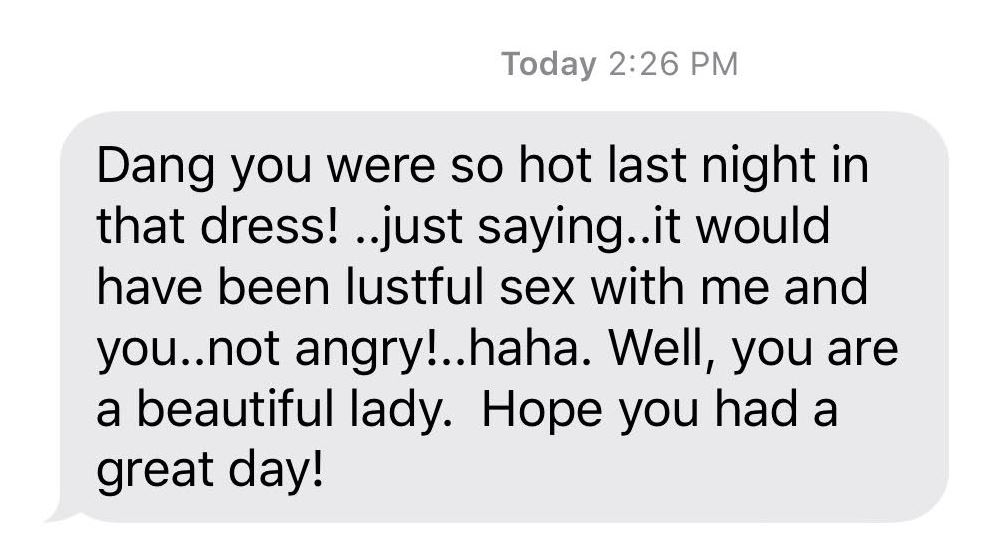 Sorry to hear it was a bust. I'm super curious about that eatery though as how you described it sounds pretty cool.

It’s amazing and anyone who doesn’t love it is not someone you want to hang with!

Ick. That's super disappointing, but I'm glad you found out you were ehh on it all on date #2 and not date #6+. It's disheartening to keep meeting duds, but I hope that means the next amazing guy is going to knock your socks off (in all areas!).

Gah. That sucks! I'd 100% go to that restaurant with you though. Sounds awesome!! xx

What a bummer! And doubly sad you couldn’t even have a fuck buddy. Ah well. Nothing ventured, nothing gained! Do you think he’ll reach out again?

He sounds exhausting. But the restaurant sounds fab.

Well that answers my question! If you’re not interested in seeing/fucking him I might just ghost him. Or simply reply “thanks!”

Haha! I just went back and saw your question! Yeah, I don't need to be mean and ghost, but I haven't replied yet...perhaps a "thanks"...thanks! :)

I'm pretty sure great sex has never ensued after a guy taking a woman's hand and pointedly placing it on his crotch. That's just...9th grade level game right there.

He definitely was not the right one. Good thing you sent him home.

Sounds like he might be a bit spectrum. You should let him down nicely, but obviously xx

Spectrum? You think? Possibly. I thanked him for his text and that was that...I believe.

Man...sounds like he was out to sabotage the date right from the start. No idea why. Or maybe he's just completely clueless and socially inept??

The sabotage thing was exactly what I was thinking too!

Well. That was disappointing. Back to the Drawing Board!

Fabric and air!!! Like there was a literal void where there should have been something big and hard.

Sorry this date sucked. I'll obviously read on to see what you did with that text, but I probably would have ignored it.