Since my Last Confession in Planting Trees


Which was never, per se, but anyway.

I had a bout of shame and anxiety earlier. But first, the preface:

I have an interest in Catholicism for various reasons. Some of which has to do with writing through the eyes of some Catholic characters. Most of which is a natural draw towards things that would probably hate or condemn me, like a guilty little child. Anyhow, to sate my curiosities, I bought a Catholic bible recently. For those that don’t know what the difference is, a Catholic bible contains something called the “Apocrypha” which are the books left out of other iterations of the Bible that the Catholics still honor. (Doesn’t that word just sound so forbidden and sexy though?) That aside, my copy also has a prayer directory in the back and it opens with the Dei Verbum (Dogmatic Constitution on Divine Revelation.)

I have already learned a boatload of words and phrases and straight up facts about the common Bible stories that I did not know, even though I’m not even halfway through Genesis. (Did you know Noah sent out a raven before he sent out a dove? Badass, amiright?)

Anyhow, I was frankly keeping my purchase a secret. I couldn’t find a Catholic version, so I ordered one online. Why a secret? Because the awkward shaming that one might expect from coming out as transgender for the first time was going to happen (ironically) if my folks heard I’d bought a Bible. Which, it did, in a comical way. I ordered it from a shop on amazon called moviehub or something. They handed me the package and said ‘here’s your heavy-ass movie’ which I explained wasn’t actually a movie… which then I, of course, had to answer ‘what is it then?’ …queue the confused and horrified looks.

I’d like to clarify: if I announced tomorrow I was converting to Catholicism and attending evening Mass, they’d support me. They’d probably even give me a ride to St. Joseph’s here in town. They’d question the holy hell out of me, though, to make sure I was certain and not off on some wild tangent or caught up in some odd phase. Being religious is so unlike me, so their mortified and confused expressions were likely merited. My dad (non-biological) was raised Catholic and still does small things like crossing his hands in the air over his chest, even though he doesn’t identify as Christian anymore, so it’s not a household of angry atheists I’m facing.

Moving on. Fast-forward to now.

My folks have this game called Asylum, where you are some insane character trying to fight your way out of an asylum. It’s gruesome and creepy. It’s perfect for Halloween. We’re going to be hosting a game night at some time closer to Halloween with friends from work, and we’re all going to dress up in the theme of the characters we’re playing as. Because of my recent Bible purchase/reading, mom nominated me to be the raging Christian.

Queue the shame and anxiety.

Not about the character …I am not one to back down from a dress-up/cosplay challenge. It’s the fact that I had to go into the Party Shop down the road, because I was informed ‘they have a few suitable costumes.’ That was a challenge I DID want to back down from… it’d be easier to get me into a protest against equal marriage than a party store… Alright, that’s a huge exaggeration, but I do cringe out at the thought so very very badly. I hate them. Rowdy children full of something to prove, yelling at noisy auto-playing Halloween displays about how NOT SCARED they are. Moms with ‘speak to the manager’ hairstyles looking at cheap, embarrassing costumes that make me want to duck my eyes to the floor. Employees having to answer questions that make me want to die of embarrassment. Facing the person manning the register with a costume and worrying what they’re thinking of you for buying it as if you’re some late teen making your first purchase at a sex shop.

I get totally mental. I have no idea why. To my knowledge, I’ve not had a traumatic experience in a party shop that should get me so triggered.

Thankfully, there were no children present and hardly any customers. The three customers that were there (standing conveniently so as to block me from the priestly outfits) did match the mom hair dynamic, but that’s beside the point. There were two or three outfits that qualified… two monk habits and a black cassock. I grabbed up the cassock and held it tightly against my chest the whole time while scanning for a black sash belt and a rosary, neither of which I found. I was awash with worry… nay, guilt… the whole time. I think it was a very well contained panic, though. I was still able to walk and make words.

And then, of course, this happened.

The guy manning the register was a clean looking young man with a pretty little cross necklace. It couldn’t be some dead to the world parent figure who is sick of their job and drained of any Halloween spirit decades ago. No, it was a fresh spirited little Christian who looked like he had a heart of gold. And here’s me, a flaming-transexual-pansexual-hindu buying a priest cassock to sport on Satan’s holiday. I bit my lip, made my purchase, and scuttled out with what dignity I could muster. On the inside, I was awash with shame, terror, and laughter. On the outside, I think I kept my cool, but my face did feel like it was on fire.

Thank everything divine that my partner brought a backpack with us, since we walk everywhere when we can. I was so relieved to tuck that package away into the darkness and forget about what just happened for a moment.

Wait, is this how conversion works in this day and age? Not those corny pamphlets left tucked in your windshield wipers or door-to-door spirited preachers… but some freaky seductive black magic that seeps into your soul via the door of curiosity and burdens you with unnecessary guilt until you’re in the confession booth? Because well… I’m feelin’ it now, Mr. Crabs.

My boo and I immediately walked over to my favorite coffee shop, though, so I felt monumentally better. I had the balls to finally ask if they had milk alternatives, which they did, so I got a fancy “Ozark Autumn Latte” that slayed me on the spot. 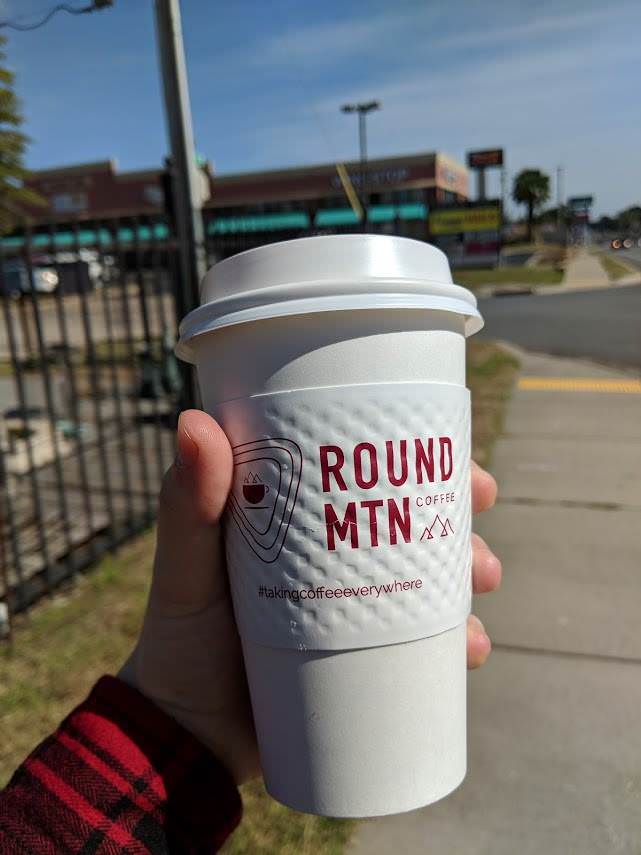 A Round Mountain Coffee day is a great day. We went on to pick up some dog food and have a lovely walk through the park on the way home.

So, here’s the result of the excursion… lacking only a rosary and sash to be complete: The Bible is the real one I bought, the dress shoes are my legit work shoes, because I’m pompous like that and have to look fancy while working shitty retail, and the little necklace was something one of us found while moving/packing/unpacking and no one claimed, and I felt strangely compelled to keep… (that was like a year ago… is that little thing cursed? Is it ebbing some sinister energy that’s making me so drawn to church?)

Anyway, I need to come up with a name for my Halloween persona. Something punny but not porny, if you know what I mean. (e.g. I’m not going the Father Ben Dover route.)

I’ll update if I think of something… or when I get dressed up and post a picture of it.

In the mean time, here’s my love demonstrating (lol, demon…) the comically cheap costume, complete with necklace and epaulet. I sought out his permission to post them because oh my word he’s so damn cute. I swear I don’t have a priest fetish. He’s just so scrumptious in black!