Everything Is Never As It Seems in Thirty-Six


Howdy friends. I don’t have much to say here really. These last couple of days have been busy and we still have to go grocery shopping tomorrow. BLARGH.

In other news, our auction date got moved to March. That helps in a lot of ways. I have a few projects I’m going to work on to make us some money. I’m not a terrible artist. I’m not very good either. But I have some sort of photographic memory that helps me be able to take something I see and put it down in my own rendition. 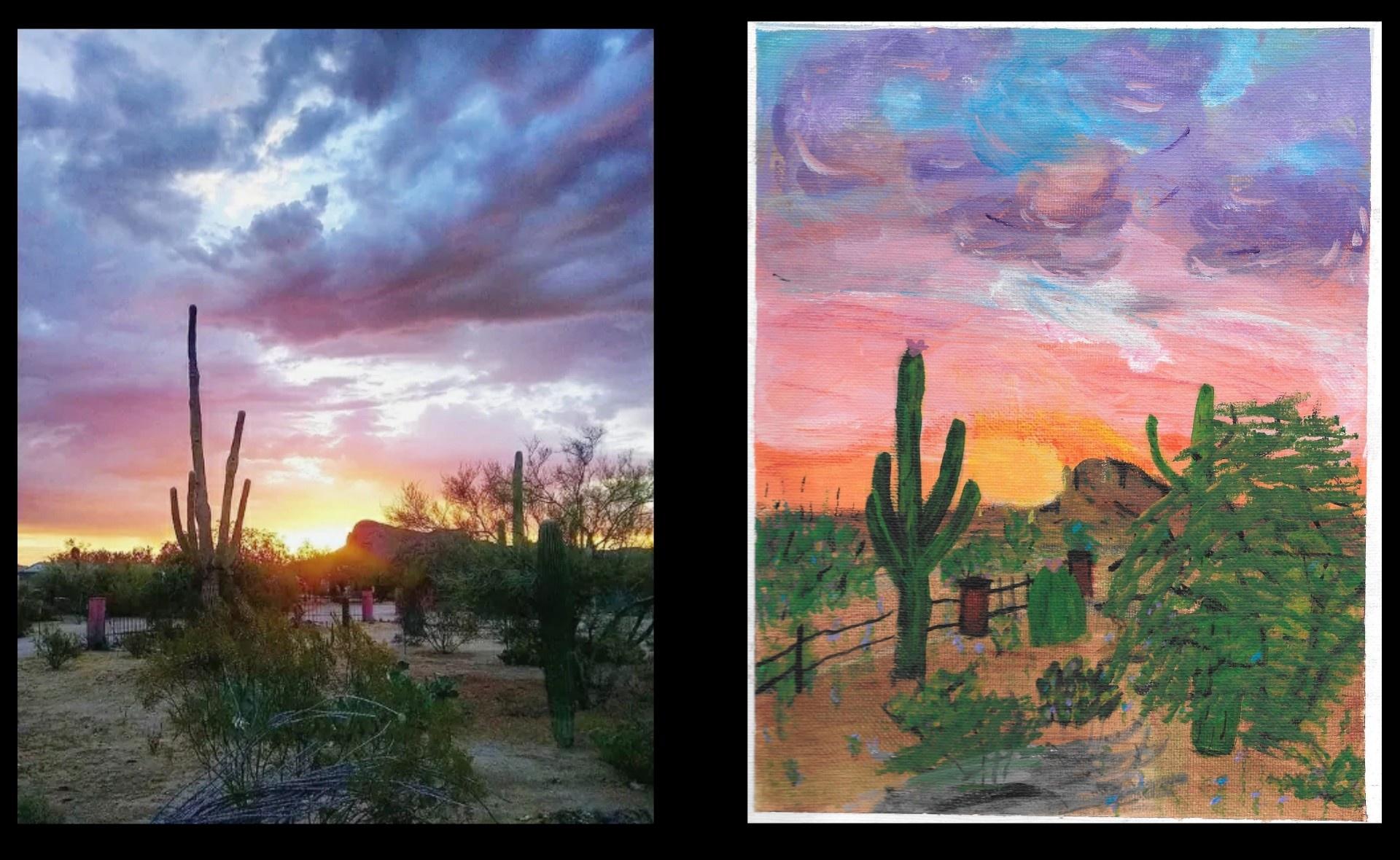 The left is a picture I took a while ago. Looking east at sunrise in my front yard. I always thought it would make a beautiful painting. So I painted it. I shopped Michael’s and got some canvasses for $11 (10 of them) and some paint and brushes for about the same amount each. Then I spent $5 on the Apple Farm paints from walmart (10 also) and another $18 on some better brushes from amazon, which came today and I’m happy with.

So since I’ll be laid up after my ankle surgery, I’ll be taking things I see or like and putting them on canvas. I have to work on drawing figures other than plants. Animals and people. I’m not bad at the sky part, that’s pretty general. It’s kind of weird though, I’ll have to get a picture of it when I go to bed, but it looks so eerie with a dim light source behind it. Very sunsetty. Another day lol.

Randy is getting pretty good at the TikTok thing, he’s on there under @wolf.concepts if you’re interested. He’s doing well too. We had a crazy little argument before New Years and he left to his dad’s but ended up at his sister’s next door because they weren’t home and then he found out why later, which is a whole other story. It was just a dumb weird thing that we both agreed was outrageous and he talked to his therapist about it and all that good stuff. We did have some pretty awesome makeup sex though from that little tiff lmao. It had been over a year since we had been able to do anything. I haven’t been pushing it. I know it must be hard to get it up when half of your penis is numb alongside the rest of that side of your body. And pain. So that was fun times.

We had to take Fievel to the vet because he was having trouble breathing and was producing a lot of porphyrin (their tears and mucus) which is a blood red substance, he looked like someone had punched him in the eyes. So we got him in and fixed up. He got 2 weeks worth of antibiotics, which helped tremendously. But now that he lost 40 grams (of 355) a 1 inch section of his tail kind of died, so I have to take him again to get that amputated most likely. BLARGH.

New Years was just like meh. I think we watched football throughout the day, when the internet was cooperating. Made food, but don’t even remember what we made. NYE we kinda just did snacky foods I think. Fuck, I don’t remember. NYD we had Shrimp Scampi in the evening. We watched football on Sunday.

This monday I had my botox. Had bloodwork for my rheumatologist and then my dad left that day. We also got our stimulus that day so we went and bought a bunch of necessary items like rat and dog food. Some treats for the dogs, and some new pine for the rats. Our last thing to get is the shocks for the car. Randy has to talk to the mechanic down the street to do that though.

All in all the beginning of the year has been alright. I have a lot of stuff going on this month with Randy’s physical therapy. Then my appointments, my surgery, etc. So that’s FUN! Haha.

This has taken me like 3 days to type out, so enjoy.