I'm Gearing Up for NJM2020 in Thirty-Five


Hey friends! How are we doing. I’m trying to get into the habit of writing more frequently so I can get into the NoJoMo thing this year. I used to do it every year, but I haven’t in SO long, and I miss it. If anyone can direct me to any Prompt Lists, that will be awesome too!

I am kind of only here to brag a little bit, toot my own horn, which I don’t do often, nor does something like this happen often.

I have been working on the board for the rats’ first birthday shoot on Saturday (they’re 1 on Sunday). Well I had remnants of a Science project board I had used as a play pen for them until they got to where they were just jumping out and it looked like popcorn.

ANYWHO lol. So I have been coming up with various things to put on it or whathaveyou but nothing was really working out for me. I also stopped at Dollar General the other day and picked up a few Halloween Decorations, spent like $6.

With everything going on with my cousin I hadn’t had a chance to really do much, but when we got home from picking him up from work and having dinner, they sat down to play Borderlands so I came in here and kind of just got into it.

Firstly, I had edited and printed this picture so it would sit in the background… 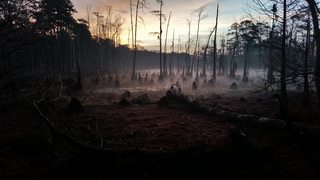 I lightened it up and gave it more color. taped it down because I couldn’t remember where my glue stick was (found it today) but the right 1/3 of the board was a different picture and it was smaller. Here’s Winston. 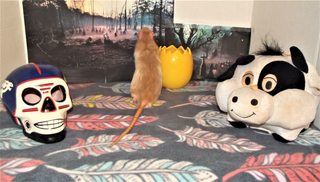 So that’s what it looked like two days ago. I had some paint-by-numbers that we hadn’t done yet. So I used the paints from there, plus I had some red and black from last year when I made the board for my family reunion. That’s also where I found my glue stick lol.

So I kind of sat down and looked at my available colors and planned it out. Painted the border completely black. I created a “frame” on the right 1/3 I just removed the other pic. I made like a little hill and added some gravestones and trees and the sky and ground. I am 1000% impressed with myself because I am NOT artistic in the least bit. 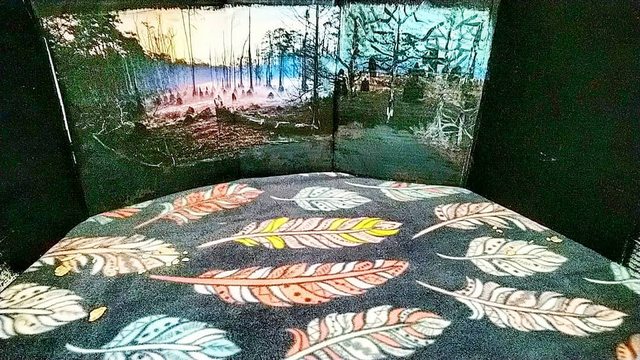 At least I thought I wasn’t. But, thanks to the gods above and the spirit of Bob Ross himself, I was able to make a pretty badass looking backdrop for my shoot! I’ll be shooting all 12, but highlighting the group of 5 that are turning 1.

That’s about all I have to say for now. Not much else going on. Have a wonderful evening.

I have a prompt list for this year. I created it a while ago because I was bored LOL

Yes I did see yours! I haven't gotten much of any other ideas so yours is probably going to be it! Thank you!

You're quite welcome! Good luck with NoJoMo!