Good evening (night whatever) my friends, how are we all doing? It’s been a minute since I wrote as usual. Not much going on. I’ve kinda spent the last two weeks just existing. My botox wore off sometime around a month ago, and having not had a proper dose of my Actemra, it’s been hell.

Anyway, so after my last entry, I was still in the computer room doing other stuff, and I hear this gurgling. Like wtf. I look in the shower and there’s all kinds of stuff bubbling out of the drain. So wtf I go and stop the washing machine and the dishwasher. We try to figure out what to do and make a couple calls.

It was after 6 pm, so no one could come out then and several people wanted to be like Monday! This was Friday ok? So anyway, they were able to get someone out Saturday morning. Cool. Dude comes out the next morning and they dug it up and checked it, it was clogged so they did that. it was liek $225 just for that shit. They wanted to charge almost $800 to pump the septic tank! My dad was like HAH! NO. So they just put the lid back on and Randy called around.

Another guy came out and finished cutting the pipe because the other guys said it was too long and that may have been causing the problems so, there we go, He cut it for $20. So fuckin aye.

My period showed up a week earlier than I had in my calendar, which is good, because that means that maybe i’ll be going back to a normal cycle sometime soon. My cycle is somewhere between 32-54 days. NOT normal. But i still get it regularly like that. so, it’s weird and hard to track, but this app that i’ve been using has been pretty good about it, so hopefully soon we can get on a cycle and maybe have a baby in the near future.

I bought a bunch more fleece so I will have plenty of stuff to make hammocks out of for the rattos for the winter. We don’t use our furnace because we can’t afford the propane for it. It uses a lot. so we use space heaters and it doesn’t always stay super warm but the rattos have their hammocks to snuggle and pile up in if they get cold.

What else. Oh yeah I literally slept all day Thursday Friday and Saturday of that week. My head would NOT stop hurting no matter what I took or did. It sucks. I finally got my botox monday, thankfully. And we are switching up my meds. The depakote isn’t really doing much as usual, so we’re going with trileptal (oxcarbazepine) for the TN. I’ve taken carbemazepine before, but the ox version is a cleaner version of the drug, she said. So we’ll see if it helps or not. carb did before, but only for a little while. 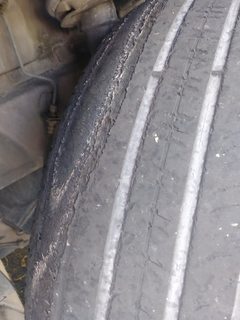 UGH, so after botox we went and got food and that’s when we noticed it, so we went to Discount and they wanted to charge us almost $500 for tires, and my dad was like no again lol i don’t blame him. But we ended up at walmart, which was another fiasco. They closed at 6, but we got there at like 5:45 and there were 3 guys just standing around in the bay. So I went inside to use the bathroom, and when I come back, Randy is already pissed.

So I’m like wtf happened. Apparently the guy was like no. We close in 15 minutes, these guys are about to go on break, and it takes an hour and a half to change two tires. So he just refused to do it. Randy was like wtf it doesn’t take that long. So they called the manager over to “see if it was ok” that they put the two fucking tires on. We were like, it is literally an emergency and we drove here specifically to get two tires so we don’t DIE on the way home.

If they refused to do it, I was going to find a security camera and be like this security camera shows we were here at THIS time, so if we DIE tonight on our way home, it is on YOU guys for refusing to sell us tires when you were still open.

But, they finally got their heads out of their asses once the TLE manager (she literally rolled her eyes when Randy told her the guy said it took 1.5 hours to change two tires) AND the store manager came over and told them to do their fucking job. So in the time it took them to hem and haw about doing their job, they could have done the tires and we would have been home. ALL in the time in took them to whine and complain about it.

Joke was on them though because the guy that told him no to begin with said that he was staying “later” anyway, and when we were talking to the girl at the counter, she’s like he is talking crazy, we stay until 7 anyway to clean up, so he was just not wanting to do his job. LOL.

ANYWAY, so we got that done. One of the rims is bent, and we still need shocks for the back, which are like $120 a pop, so we won’t be getting those any time soon. UGH I just hate how we lose a reliable vehicle but we still have a vehicle, then we lose that vehicle and the “new” one we get is still unreliable.

The title of this entry is from a song originally by Ramon Ayala. My cousin Lisa Anglada recently released her first studio album, and she covered it, so here’s that, if you’d like to take a listen.

What else. This entry is already super long, but whatever, i need to get this all out.

Randy went and spent time with his family the saturday I was out of it. I stayed home and slept and just kind of did stuff around here. Well, they did their racing thing and then went back to his dad’s. Well he calls me way later in the night, like midnightish? I think. Anyway, he’s fucking crying, and I’m just like what the heck happened.

So he’s telling me that one of their family friends was there also and he just kept going on and on about why wasn’t Randy working and pursuing a dream and he just kept saying stuff like that over and over. Randy’s dad sat there the whole fucking time and said nothing while Randy was trying to explain over and over that he’s got 6 fucking holes in his brain. OMG. His dad said nothing. in Randy’s words “drunk asshole”.

So he got home and I just kind of held him for a bit and we went to bed. Its just like wtf. Stand up for your child once in a while, even if you don’t fucking like him. He’s just not had the best luck with them ever “coming around” with his health issues. But he posted this a couple days after that…

I can safely say. I am glad i married the girl that i did. I know I have treated her like shit at times and have taken advantage of her several times. We have had our fights. I have lied to her and worst of all I have cheated on her. This is ALL in the past and has been for the past 3 years. I have been fighting for my life everyday since that horrific day. But yet. There has always been us. No matter what. Thick and they thin. I would not be here if it wasn’t for my wife. She has stuck by me thru it all, for the past 8 years. I love her and always will

So that was that. He’s just kinda been blah about it all though still. Then his sister is dealing with her own bullshit that he’s going to get himself dragged into, which I don’t want, but, I understand his standpoint and why he wants to do what he wants to do. So that’s where our Thanksgiving plans get kind of screwed up.

We didn’t really so much have plans to begin with, but my dad text me a few days ago saying he’s going to Dallas with my aunt, so we were like well lets just go camping for Thanksgiving then. Randy doesn’t like Turkey, so we’d probably take some steaks or something like that to make for that day.

But, then his sister text him a couple nights later saying that her BF had just gotten removed from the house by the cops. It’s a whole domestic violence situation that I’m not going to get into much. But, she was drinking and she has fatty liver disease so she was saying shit like she was going to kill herself with that bottle of vodka and all kinds of crazy shit, so Randy is over here just listening to her ramble.

He wanted to get out the door to Washington but I’m like how the FUCK are you going to do that? I get it, I do. He already lost one sister to domestic violence. He doesn’t want to lose another. However, I also don’t want to lose my husband to someone else’s domestic violence situation. That’s MY reasoning that I don’t want him to go. PLUS, she’s like 47 years old. UGH I never want to be the one to say no, but we still have a month to figure out the fine details of THAT situation, so I’m sure there will be an update there.

My brother Dr. A turned 39 a few days ago. I handwrote him a message and posted it to his FB. I had literally made about 39 phone calls the previous week. I honestly did not feel like giving him a call and I know he understands. I’ll call him in the coming weeks or something.

I’m trying to figure out what to make for Christmas presents. Or something. I don’t know. I was thinking of finally teaching the rats how to paint and sending everyone little paintings but I don’t think most of my family would appreciate that lol.

Who knows. I’ll come up with something maybe. You know, I’ve wanted to make something for like the last 10 years and I’ve never had the money. It’s always been around Christmas that something happens so I don’t have money to buy or make anything. I was POSSIBLY thinking of doing baked goods too, because I know I can do that, and getting everything for that wouldn’t be too much of a hassle. But yeah we will see. le sigh I hate hate hate this waiting game.

Please if you pray or meditate or whatever you do to something more powerful than your own being, ask them to help speed up Randy’s disability decision. We have until January.