Death to the Dollar in Politics


Well well well. We have been wondering where my Prime Sinister has been getting his money from. I assumed China but I might have been wrong. The Bank of Canada has been printing just a little bit more money than usual… 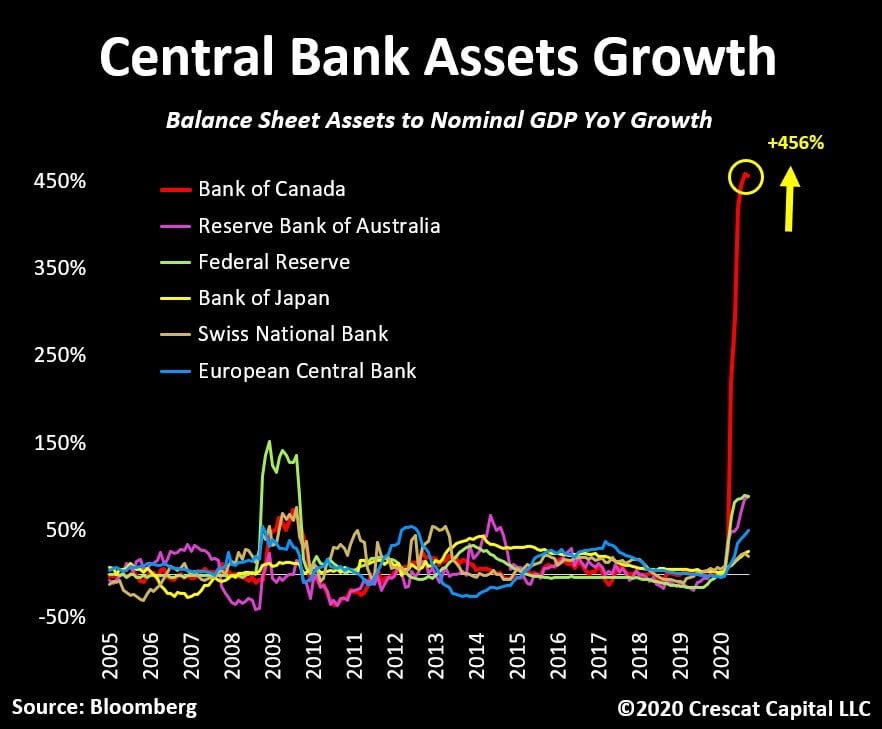 Could Trudeau be dumb enough to try and auto inflate our economy? Is that even a question at this point? He won’t even tell us where all his spending is going. Billions in infrastructure are unaccounted for. They’re not keeping receipts? What are they trying to hide? What infrastructures is he hiding from us? Well, we learned that he is shopping around for a third-party to help run his upcoming “isolation camps”. So that’s what he has been building. He has them in nine cities and we don’t even know what we need them for. His father spent fifteen years committing cultural genocide against my people so is JT going to finish what his father started? No! I doubt it! Canadians would never allow it! Sure, he praises China and forgives China for having camps. The media doesn’t like to talk about the little cleansing that China is doing right now but I don’t think that is what Trudeau’s camps are for. I predict that is where people who refuse the vaccine are going to go. That’s where I am going to go because the Moderna vaccine is a freak of nature and it terrifies me.

Transhumanism is supposed to be science fiction. Again, it’s changing our genome through transfection with a synthetic RNA that is designed to change the course of our stem cells. This is a gamble to get our bodies to grow the virus to get our body to produce T-cells. The other gamble is that this is going to be a temporary change in our genome. This has never been done before in humans and the long-term effects in animals have been increased cancer rates, increased mutangensis and increased autoimmune responses to the very viruses that it’s supposed to protect them from. In the trials right now, 100% of the high dose subjects experienced systemic effects and 80% of the low-dose subjects experienced systemic effects. For whatever reason, the vaccine also comes with Luciferous, a bioluminescent that produces a digital signal and Hydrogel, a nanotechnology that can potentially record information and also receive information. (My truther friends all say that the hydrogel is installed in us so that the government can use the 5G waves to make COVID shutdown our lungs, lol it’s an insane conspiracy theory but why does it look like things are adding up to it?) The rest is not conjecture, just go look at the vaccine yourselves because it is important to know what is about to be forced into your body. The investors are DARPA and Bill Gates. DARPA uses transfection as “Gene Extinction” technology to wipe out species such as mosquitos in Africa. Bill Gates is a Eugenisis who is on the record saying that he can reduce the human population by 10-15% through vaccines. Why would I trust a vaccine with investors like this? We don’t know what the long-term effects are from surviving COVID says people who get everything from the news. We won’t know what the long-term effects of changing our genomes either are when we get those vaccines but here we are. Not talking about that.

Anyway, I digress. Trudeau is going to collapse our dollar the same way Venezuela collapsed theirs. Socialism does not work. You eventually run out of other people’s money. So Trudeau put millions out of work and forced small businesses to close forever and now millions are unemployed without any recourse. Myself included but not from a lack of trying. So who is supposed to pay for all these social programs? The deficit that he accumulated from his COVID response is approximately 10k per person. Every man, woman and child has an extra 10k in debt in Canada. That’s 40k per household if you’re a family of 4. Our kids and grandkids are going to be left paying this off. Anyone else burn through their savings and retirement to protect the old, sickly and essential workers? They’re all so highfalutin right now. I’m special everyone has to protect me from the .01% mortality rate. The recession after the war was less than this and Canadians paid it off in one year by going back to work. We have the biggest unemployment rate in the G7 right now and Trudeau’s response is always the same. We are focused on protecting Canadians. 5 minutes later… Now back to my radicalized climate agenda that nobody asked for. Well, stop. Your COVID response did far more damage to Canadians. Nobody saved lives and nobody saved the world. Open us back up and let everyone go back to work without any restrictions. We don’t reduce speed limits to 10 to protect assholes who don’t know how to drive so we don’t get to force people to make sacrifices after sacrifice to protect people who couldn’t prevent their underlying conditions. All COVID did was reveal the real threat. Obesity, hypertension, diabetes and respiratory illnesses… the leading causes of all of those is not victimhood it is bad nutrition and bad choices. It’s a free society, I am not entitled to make people live their life the way I want them to but neither are they. Everything in life is a tradeoff. Also, the PCR that they use to test for COVID was never designed to be a diagnostic. The inventor of the PCR said so himself. Positive test results are not cases. You can amplify the test enough times to get that swab to turn colour and have a positive test result which is not by definition is a case. It does not mean that a person is sick or that a person has something that can make them sick. Do your own research on the PCR. Le sigh. Was I too harsh and real about the victim signallers who are vulnerable to influenza? Liberal privilege, the belief that you can tell people how to live their lives.