WITH MARTINI IN HAND in Postcards 4 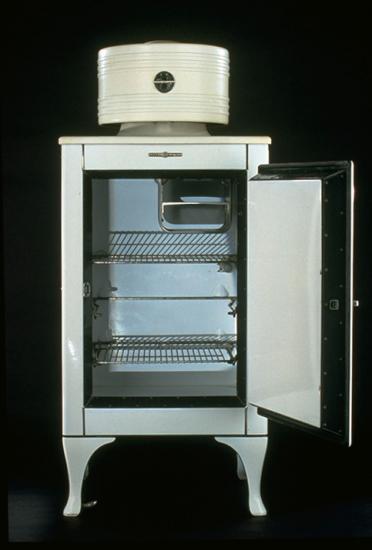 From American History si edu. A General Electric Monitor top refrigerator from the 1930s in the museum’s collection. The name comes from its resemblance to the 1860s warship, the USS Monitor. People saw a similarity between the fridge’s exposed compressor and the ship’s cylindrical gun turret.

From ice wells, stone lined ice pits, ice boxes, then electric refrigerators, food storage changed dramatically in the last century. Just prior to WWII, many of the giant department stores like SEARS or Montgomery Wards priced refrigerators within the budget of almost every household. We could now safely store foods for longer periods, and we can use our leftovers rather than discard them. In fact, these new electric refrigerators spawned a new industry of recipes and leftover containers such as the ones from Mr. Tupper.
In the 1950’s, there were giant cold storage plants in many communities. Thinking economy, many housewives bought sides of beef or lamb to feed their families. My mother, thinking very small budget, bought a side of mutton. We ate mutton endlessly that year, alternating with the chicken, duck, and rabbit she raised. She never could kill these small animals, so had the housekeeper do the deed. When they too were gone she never did that again.
We often had “stoop”…split pea soup. We had slow cooked beef stew. By the time I was a teenager stores carried those magical frozen dinners in their aluminum trays. Often my mother and father ate out. Often too we had a tossed green salad. We lived with my grandfather. He was a vegetarian most evenings eating whatever I put in front of him. Most nights, a baked potato and a canned veggie made up his dinner. Sometimes I ate what he did. Sometimes I still do.
Continued:
…………………………………………………………………………………………………..
Himself: Gaming. Helping me with m7y c3oom7puter.9
Myself: Got a v4irus that sc3rewed up m7y v4irus assoc3iation.9
Reading: M&rs.9 Polifax2 and the C#hinda Station.9
Photo: Top: Am7eric3an History M&useum7.9
Gratitude’s: That G’;s going to restore m7e to default.9

My paternal grandparents had a monitor top. As a budding engineer (7 years old at the time) I was fascinated by this thing. My parents had a square-box Frigidaire.

So interesting. I came along when buying big freezers was a novelty ; at least to my Grandparents . I am guessing my Gram disliked canning so as much as possible was frozen; meat , vegetables , fruits and berries. She loved serving sweet corn and berries from her garden in January. She was a great cook and we lived on a farm so much of what we ate was raised there . Coffee, sugar, tea, cooking oil, oranges , bananas , flour, yeast , salt, spices, chocolate ; those were the things they bought at the store. We had our own milk, cream, and butter. Meat was purchased from a neighbor . My Grandma kept chickens. My Grandfather would never have one of his own cows butchered and eat it . He did raise some beef cattle but sold them outright . Lol. We had a pig or two over the years but they were pets( garbage disposals ) , as were the sheep that kept the lawn mowed . My Grandmother put three substantial and excellent meals a day on the table , seven days a week. There were hired men who were fed at breakfast and lunch. Everyone worked so hard that meals were very important. One of the hired men’s wives would come to help my Grandma cook and clean five days a week , so she could have some respite but she was always a ball of fire . Life for my Grandmother was a continuous stream of projects :-) . She also managed the financial work of the dairy farm ; always looking for ways to make it more profitable and trying to minimize the expected but frequently big expenses . I marvel and admire all she did and know I could not even start to do what she did routinely for decades . My Grandparents even pressed their own apples for juice and cider ( plus sold apples in season ) and tapped their own Maples to make maple syrup and maple sugar Early every Spring. It was a way of life few people can imagine these days . I was fortunate enough to be there and experience it from a kid’s perspective anyway. Everyone worked ; I had chores at the barn starting when I was five but they took me there every morning with them from the time I was two, unless I was sick . I know I was a pain to keep track of. I have heard many stories. :-)