TS4: Island Living in The Sims


I just want to say that right now I am so bloody jealous of my Sim. I want her life and her house, although the house would need to be a bit bigger for all six of us to live comfortably. LOL! The ONLY complaint I have and honestly to me it’s minor is that we can’t follow our Sims under water like we could in The Sims 3. It was beautiful in TS3 but it was cumbersome & awkward.

Conclusion: BUY THIS PACK. The cons aren’t overwhelming which the pros are in my opinion.

I created my own character this time named Calypso Oceana. 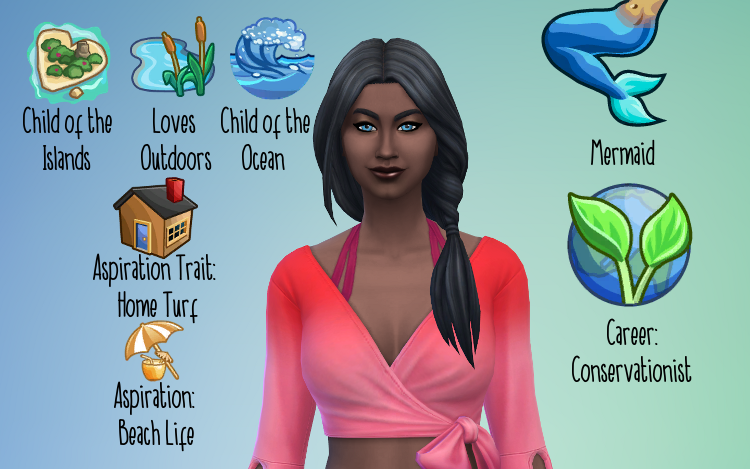 These are her outfits and her mermaid form. 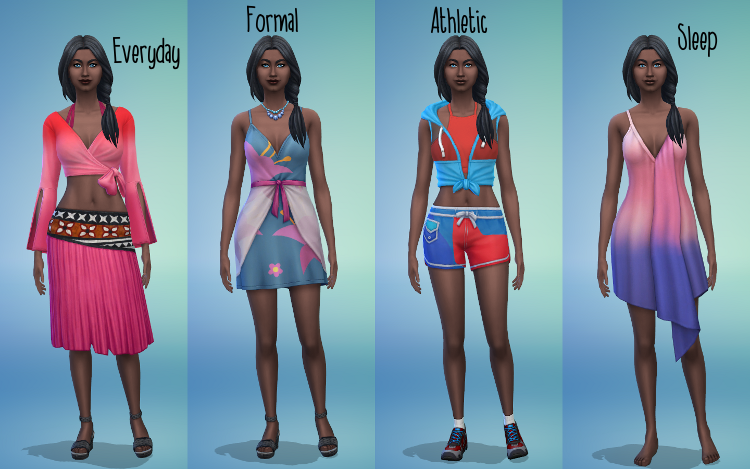 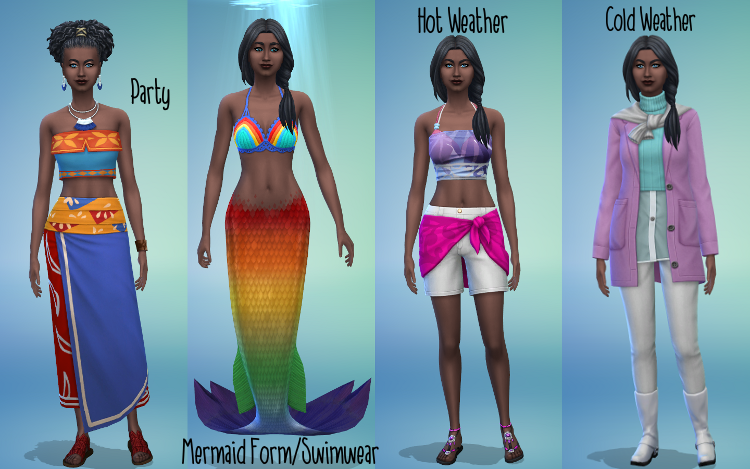 You'll notice that Caly has different skin tones sometimes and that's because Sims can now get tanned (and even burn but Caly uses sunscreen). First is Calypso's natural skin tone and the second is her with a perfect sun kissed tan. The tanning is system is quite advanced compared to previous games. Both in TS2 and TS3 no matter what you wore your tan was full body.

You have to sunbathe naked to get a full body tan now and if you do sunbathe in your swimwear the tan only covers the parts that your outfit doesn't. Caly has a bikini that has this lace around it and the lace pattern shows up on the non-tanned parts of the body. It seems trivial but in terms of detail it really is amazing when compared with previous games. 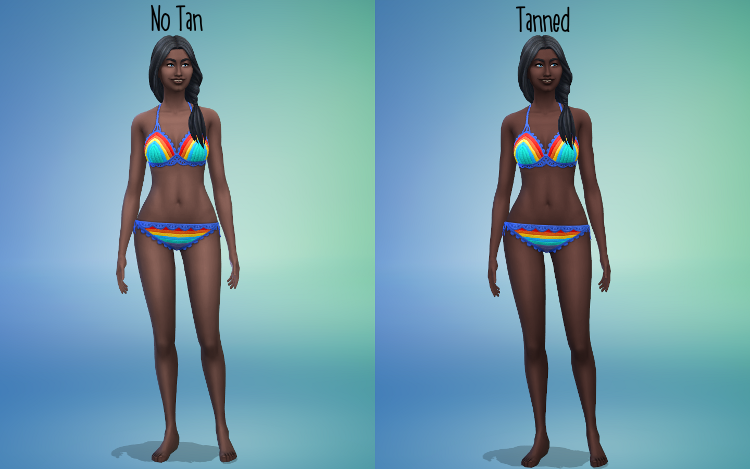 I bought the house called Lagoon Look (I renamed it to Calypso's Lagoon Lookout) and redecorated with items mostly from the Island Living pack. 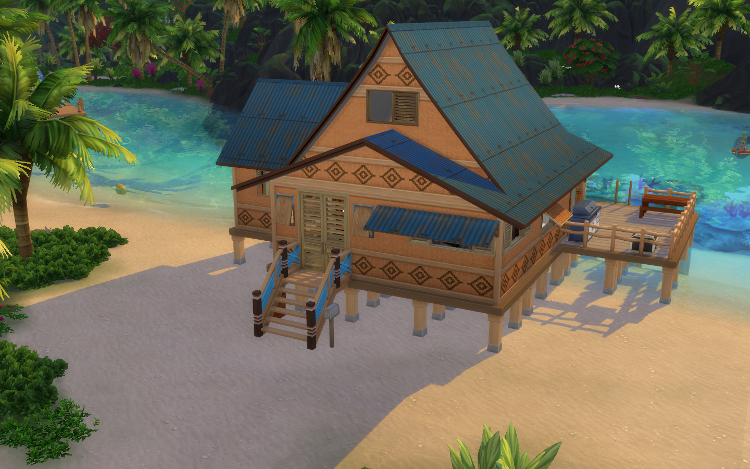 This is her living/dining/kitchen combo. I love the new stuff that came with this pack. 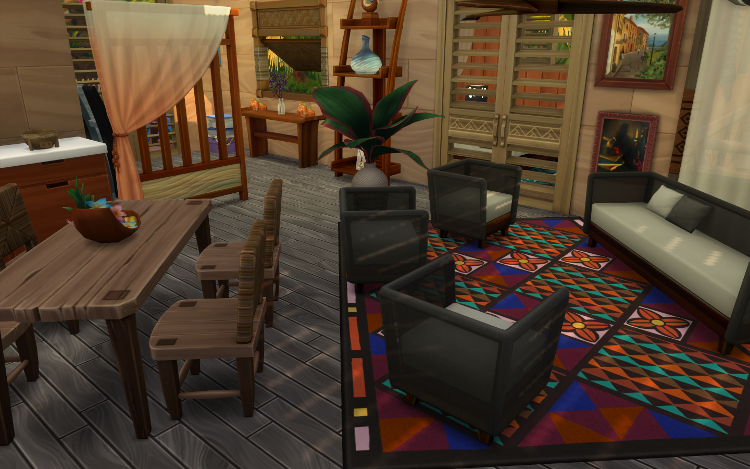 This is the what the mermaid plumbob looks like. Just like Aliens and vampires have their own symbols too. Normal Sims don't have the circle of stone/metal surrounding it. 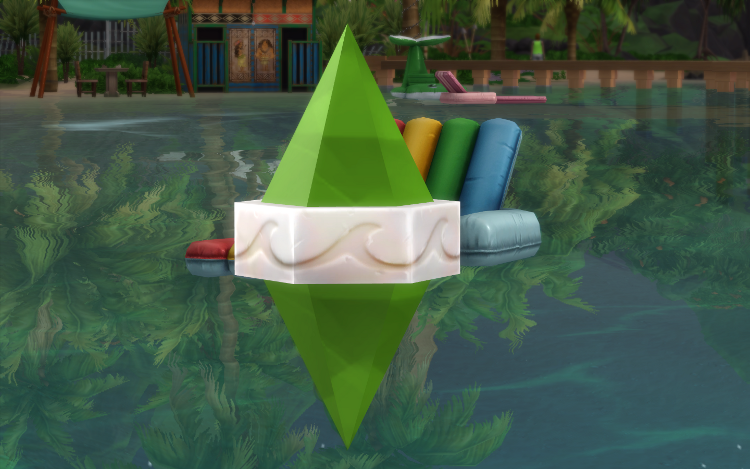 The first thing I had Caly do as a mermaid was a call a dolphin friend who I named Flips after the Beanie Boo dolphin I gave to my niece. Flips and Calypso become soulmates very fast. 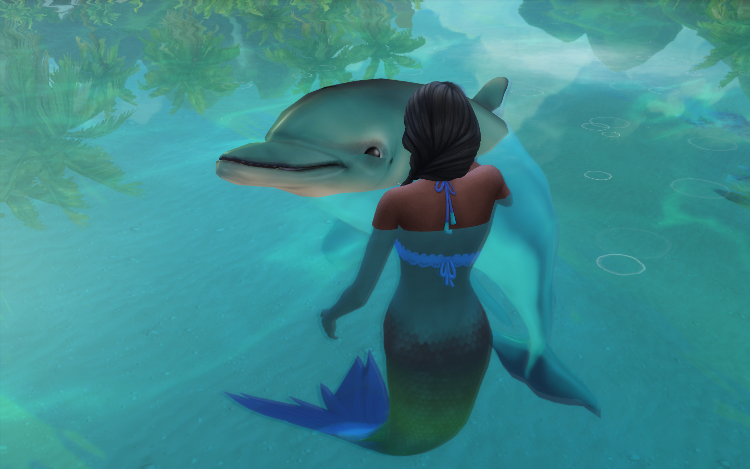 He does tricks when she asks. He's super cute. 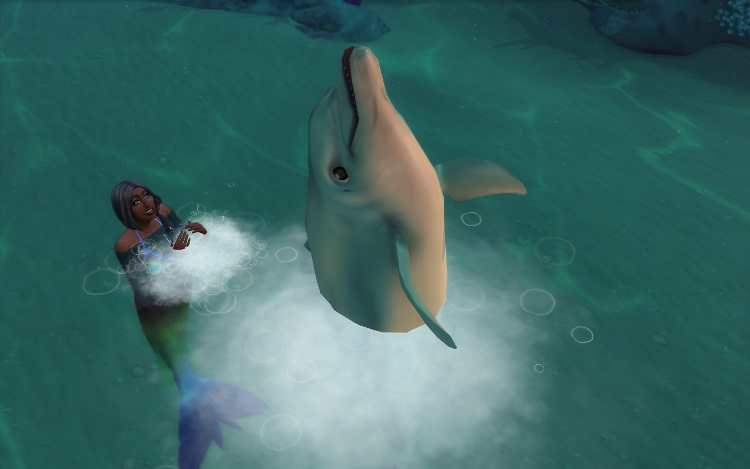 I thought it was odd that she got mad when he did the same trick as in the previous image. She looks a bit scary but you can see that in mermaid form I made her eyes different from her human form. You can do the same with vampires and aliens. 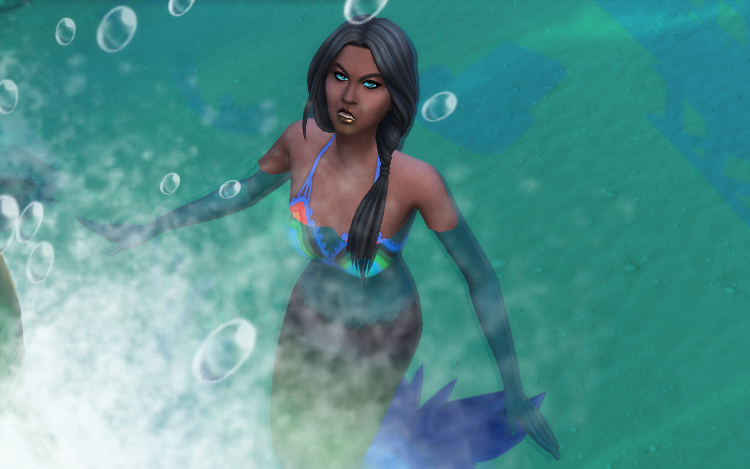 After playing around in the ocean it was time to choose one of the new careers. The choice was conservationist (only career that's full time, the rest are part time only), lifeguard, fisherman, or diving. I chose to go with conservationist. This is her outfit for her career as a marine biologist. The other career track I could have chosen was Conservation Manager.

As a conservationist you can scold people for littering or poaching endangered fish species. The bad Sim will have a red exclamation point blinking over their head so you know who they are even if you don't actually see them commit the crime. Caly has not been successful at getting the criminals to leave, they usually brush her off which leaves her very angry unfortunately. 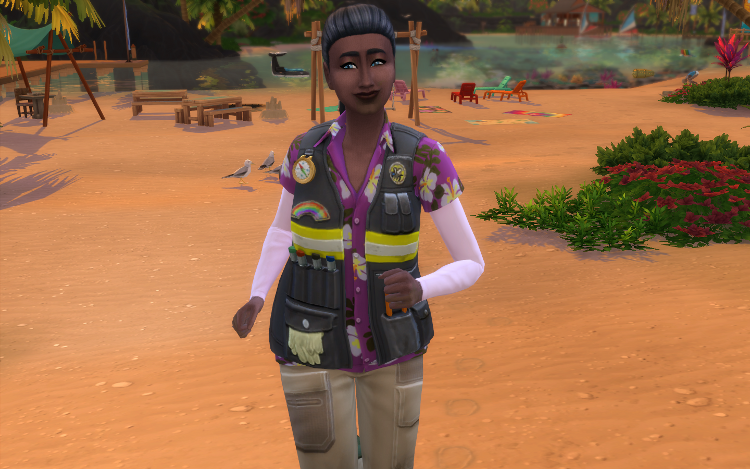 One of the things a conservationist has to do is survey different parts of the ocean or its wildlife. This is just one of the surveys that Calypso conducts. Sometimes it produces good results and sometime no data can be collected. The outcome doesn't affect your work performance though which is good since many collect no usable data. 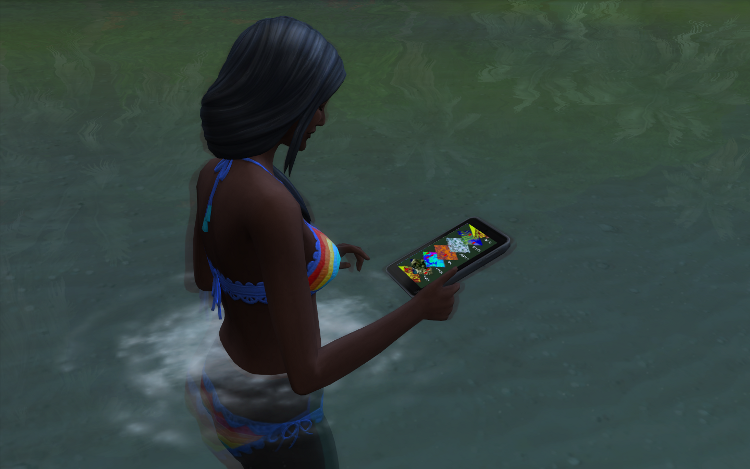 With lots of hard work Calypso cleans up the island so that ocean wildlife can blossom and there's no more pollution. The pollution is piles of old fishing lines, those plastic six-pack holders, and a bunch of garbage. When you've cleaned everything up the island is gorgeous. I got this shot by going into first person when a Sim is snorkeling. 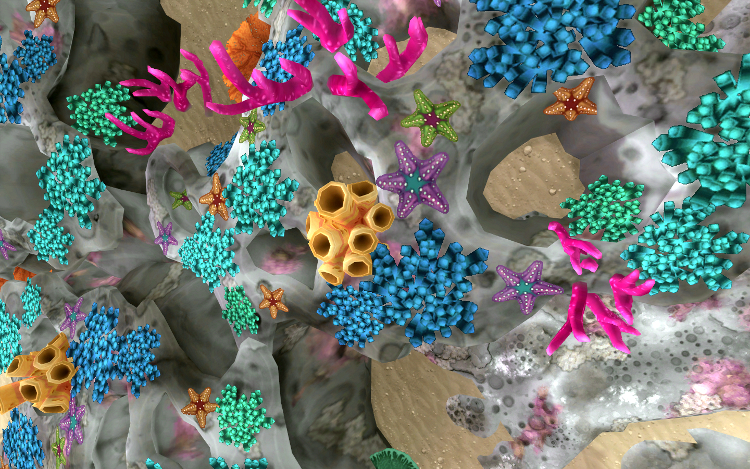 Once the island is clean you will get a message that the sea turtles are hatching on a nearby beach. People gather around and cheer, hug, do surveys, and generally just enjoy the majesty of nature. Much better than those assholes in real life throwing baby turtles into buckets as they hatched so they could get selfies with the poor newborns. 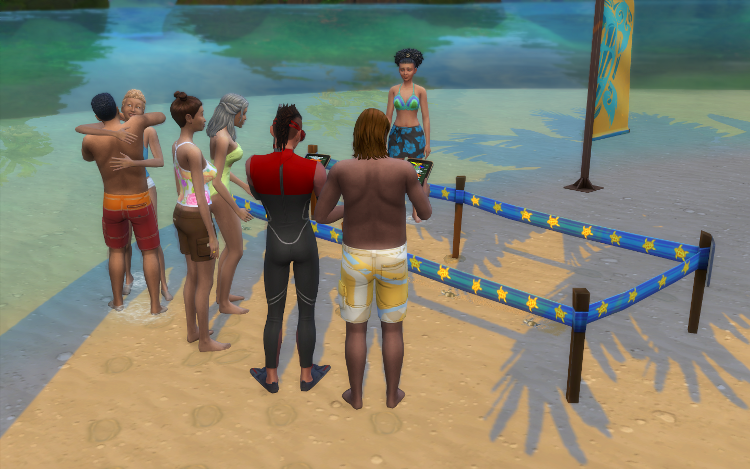 I couldn't resist a close-up of one of the babies. Too cute! 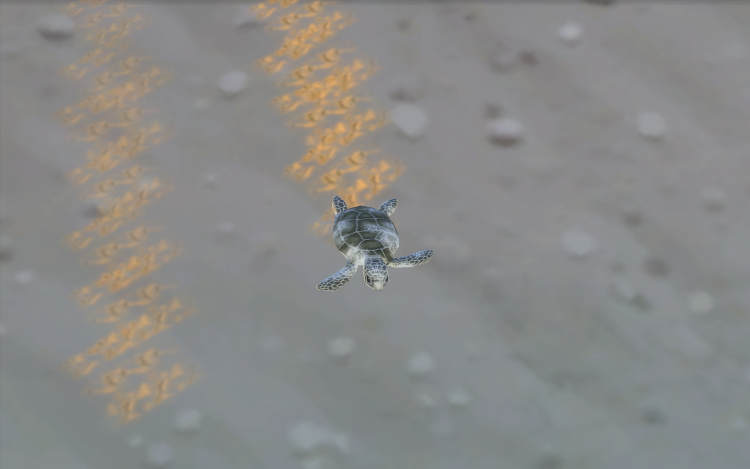 To get anywhere on the island Calypso can swim, take a canoe, or the best one is the sea-doo called an aqua-zip. You can upgrade these babies with lights, speakers, streamers for the handler bars, and fireworks. I put Caly in a wet suit as I thought a bikini looked uncomfortable. 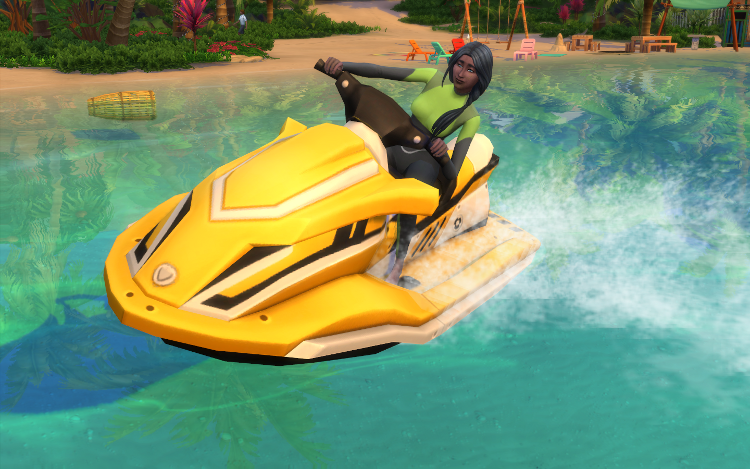 If she wants to hang out with a bunch of other mermaids Caly she can use an "Ordinary" Conch Shell. There are several conch shells to collect but this is the only one you can call the other mermaids with. Personally I find the smart phone more useful to get in touch. LOL! 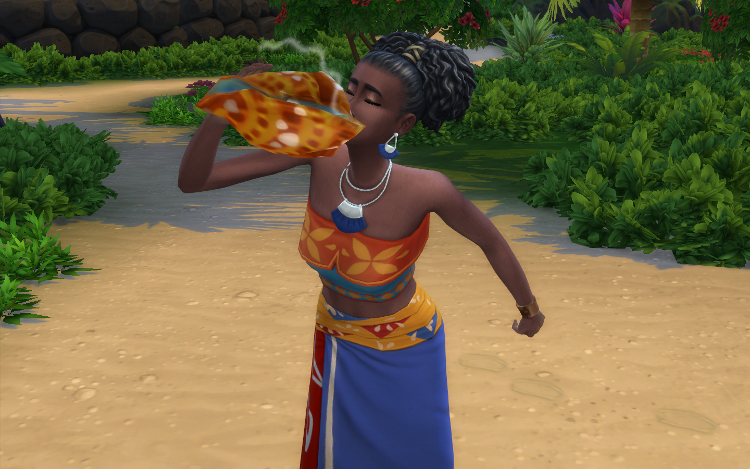 Nalani is Calypso's best friend and she's another mermaid. This pre-made Sim was used in all the promo videos for this pack. She was meant to be based on Moana and her voice in the previews is actually done BY the girl who voiced Moana. No wonder I fell in love with this pack. 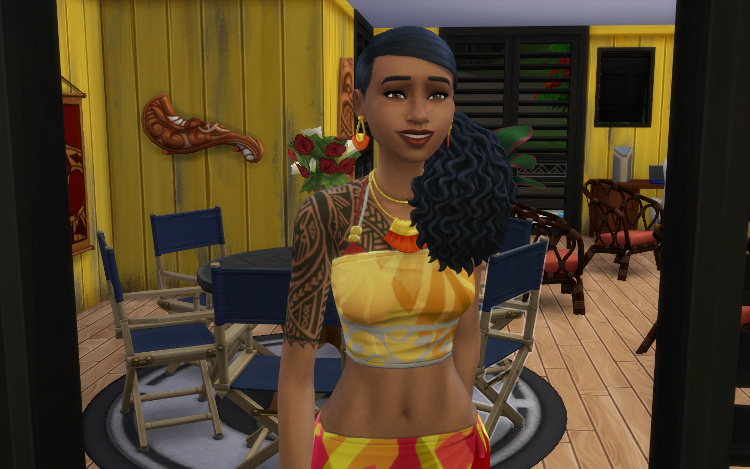 Randomly mermaids will make this weird gesture while making sounds like a dolphin. 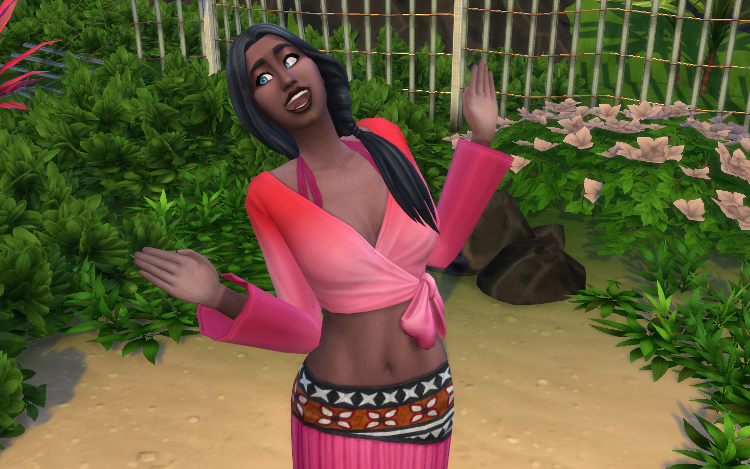 When things have gotten too hectic it's time for a nap on her rainbow floating lounger. 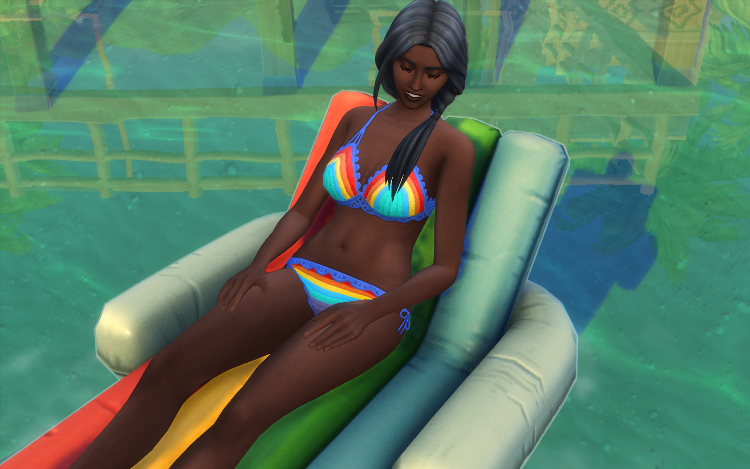 Or have a bit of a splash for a bit of fun! 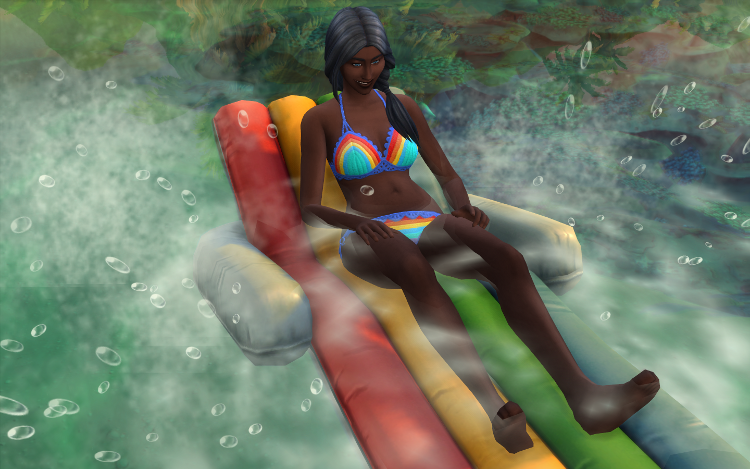 Making sandcastles is also a great stress relief not that life on the island is super stressful. 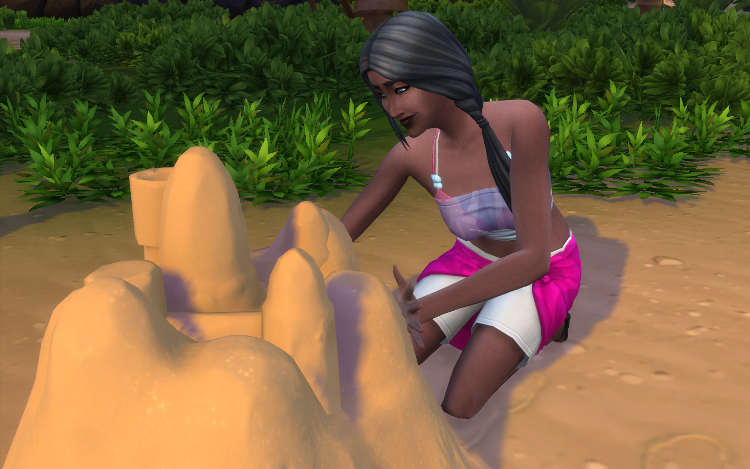 If the weather outside isn't the best a mermaid can get enough hydration from a simple bubble bath. I love how the tails drape outside the tub. Really nice touch. 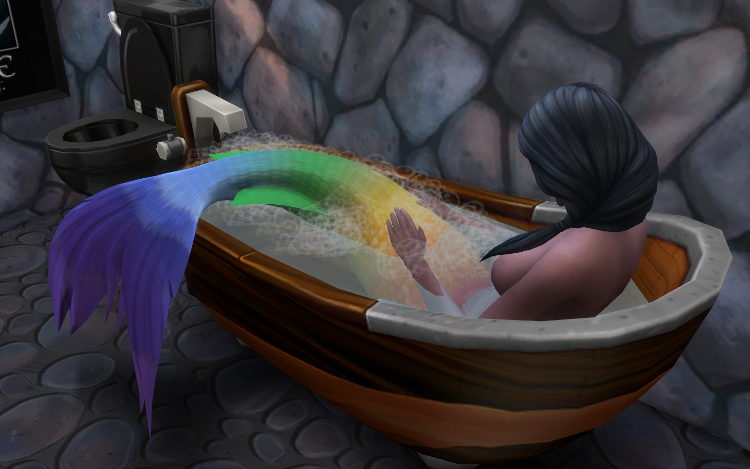 Nalani is also one of the island's lifeguards. She watches when no one else will. She stands like a sentinel on the shore ready to spring into action should a problem arise. 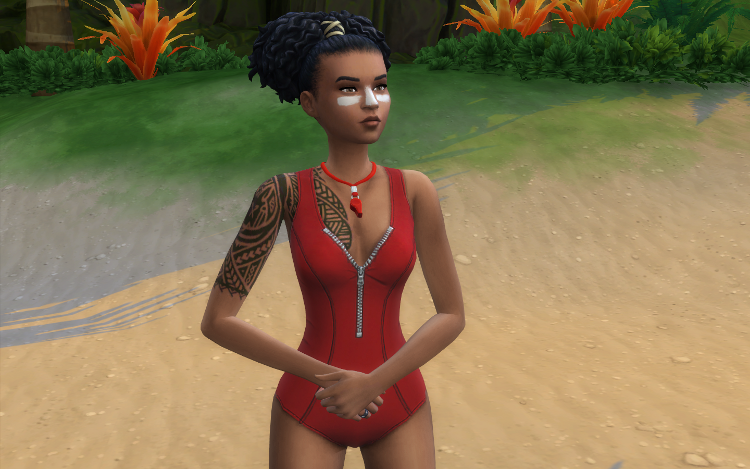 Calypso loves floating on her back in the ocean. I must admit I'm envious. 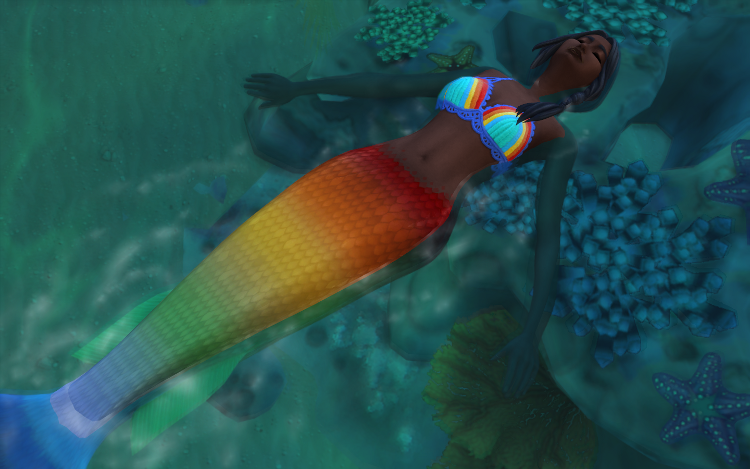 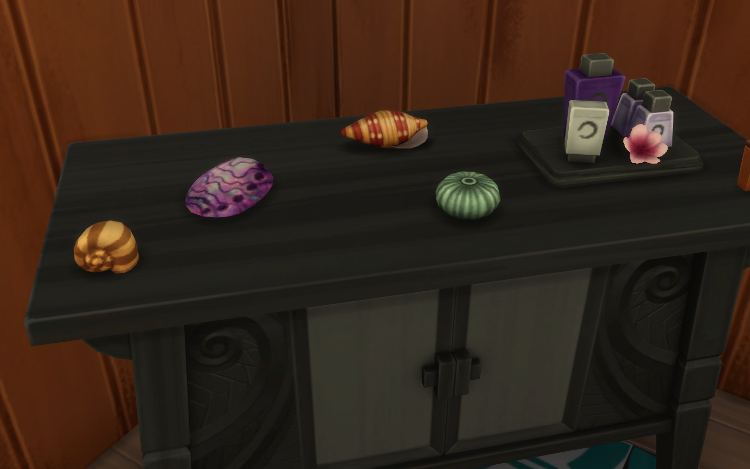 Lastly just some scenery images from around this gorgeous world. The volcano at night. 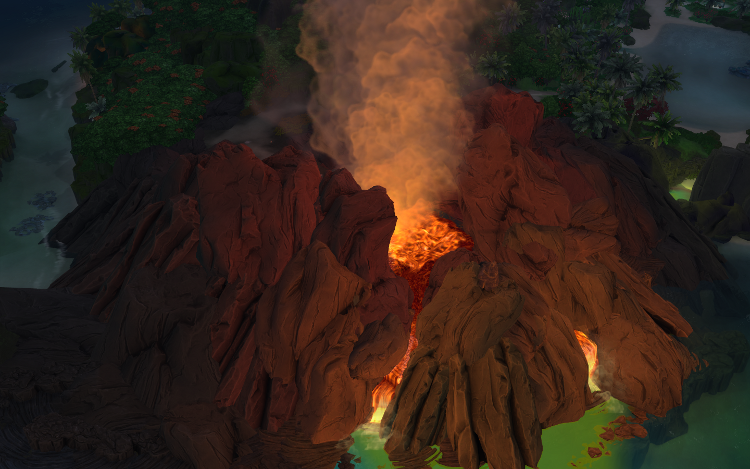 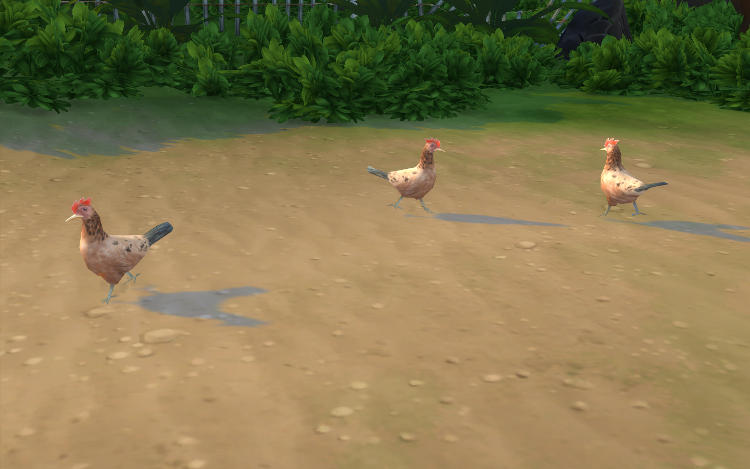 The coral reef in the back of Calypso's house. 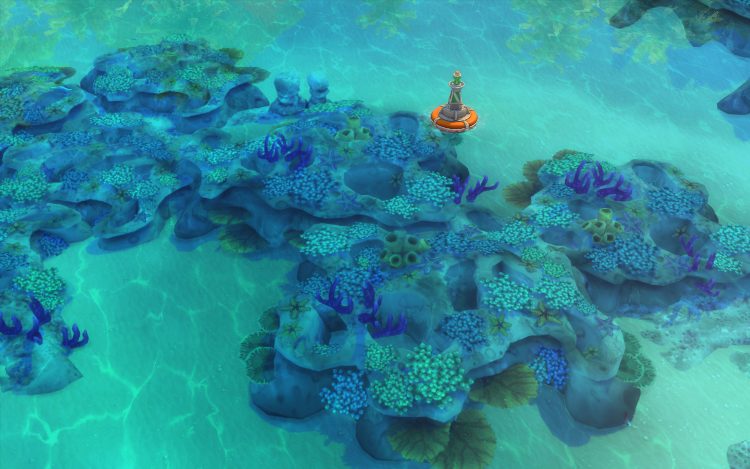 Not sure what this is supposed to be but I thought it was pretty. 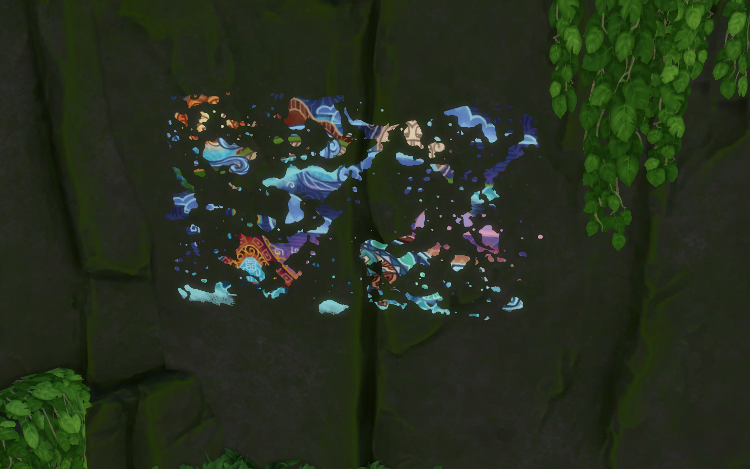