First, thanks for all the kind notes about my dad -it’s still hard to believe, and I keep thinking I need to call him. But three weeks ago we found ourselves with a happy addition to the family, which has really helped in cheering me up: 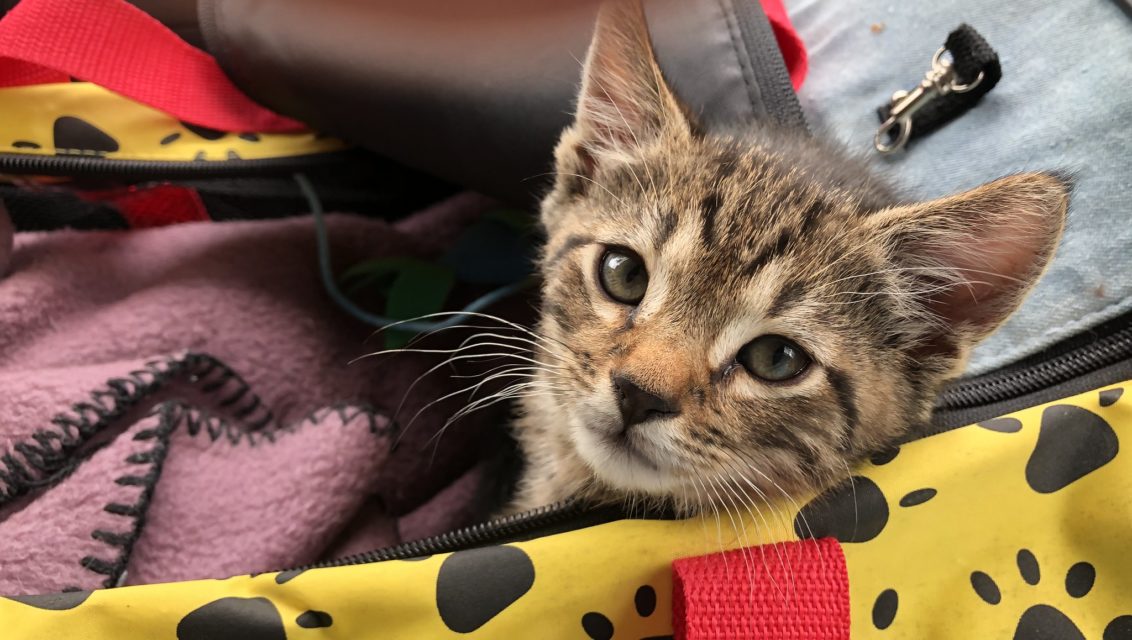 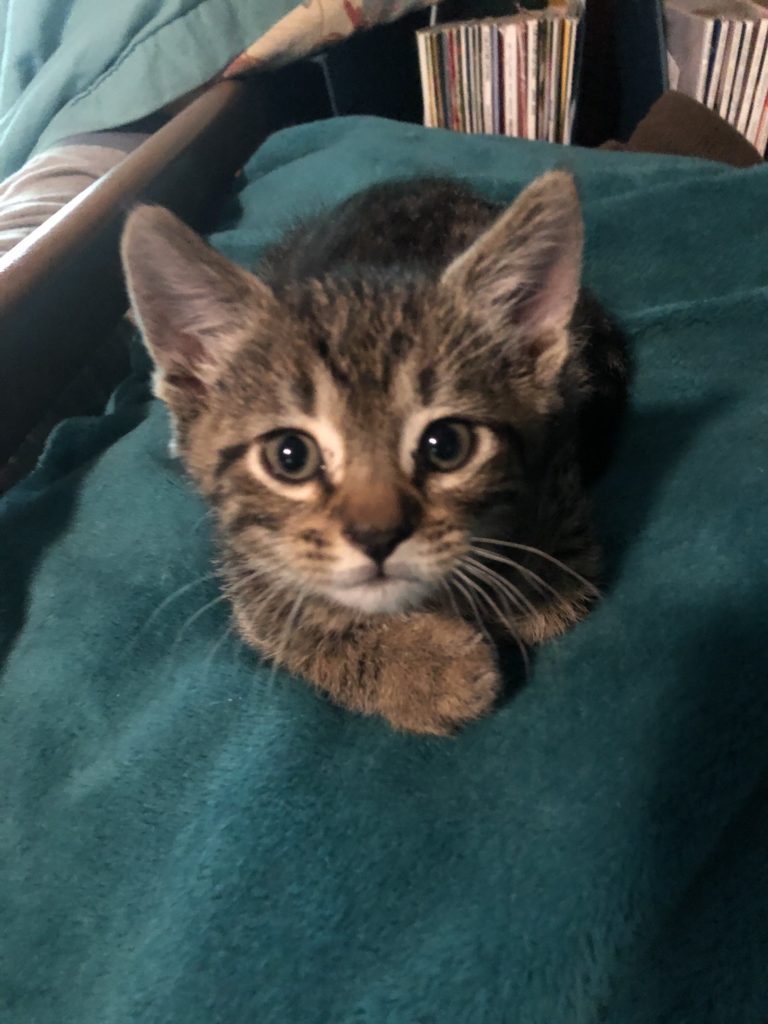 My nephew’s cat had kittens, and they brought them to visit when we were in Asheville for my dad’s funeral. They were only about five weeks old at the time, and the nephew thought they were spoken for. His girlfriend’s mom wanted the adorable tabby, shown below with my niece’s adorable little girl: 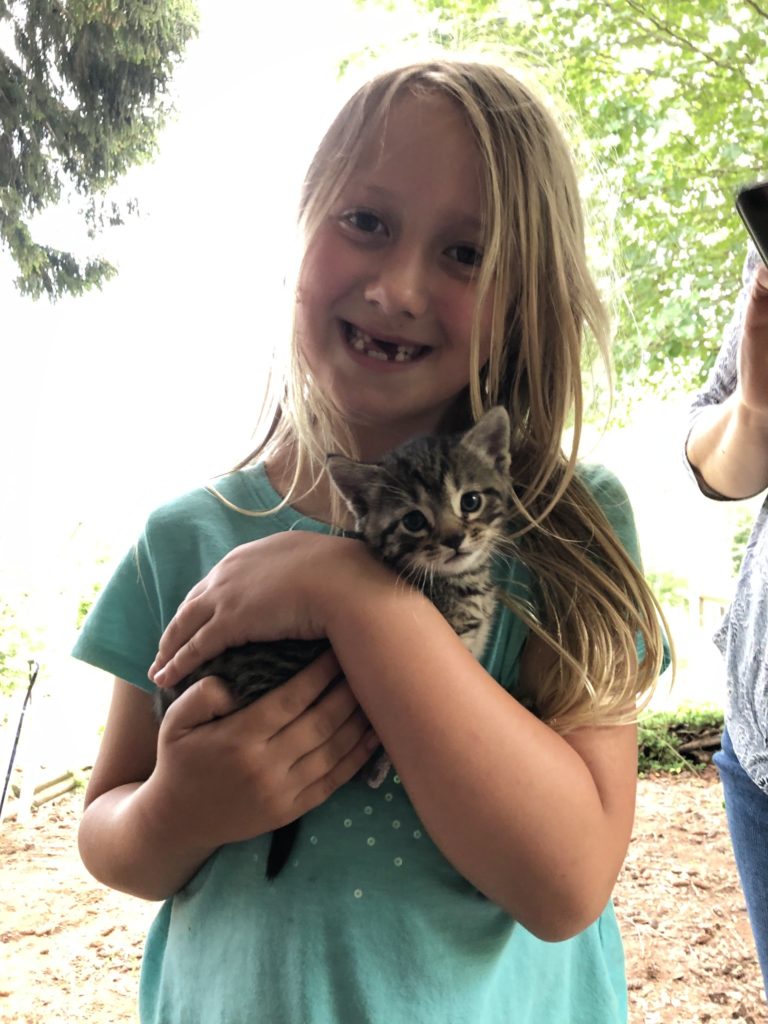 Of course I was smitten, but… he was already spoken for! And we have two cats already!! Who would not be amused if we brought home a tiny kitten!

Then a few days later the nephew told me the girlfriend’s mom had decided she wanted an older cat. So of COURSE we went back to Asheville when he was eating solid food and snatched him up. We’d actually been saying for awhile that we needed to get a kitten – Eddie and Cayce are 11, and they need a little excitement in their lives. So, it wasn’t totally out of the blue. And it’s been SO much fun! 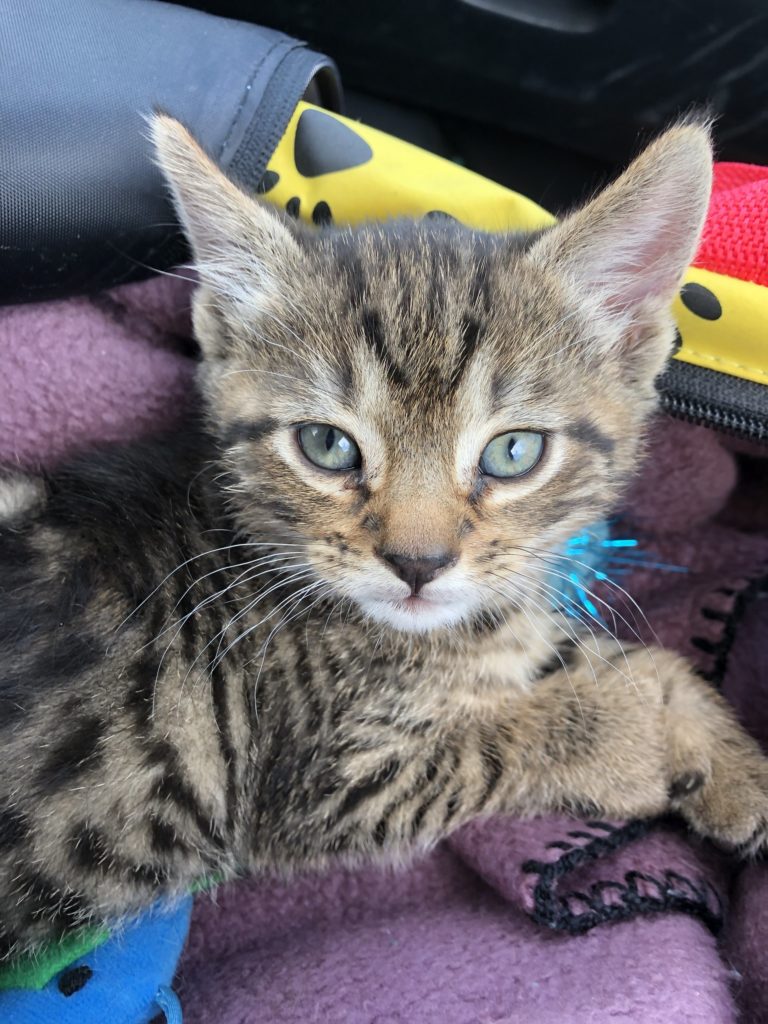 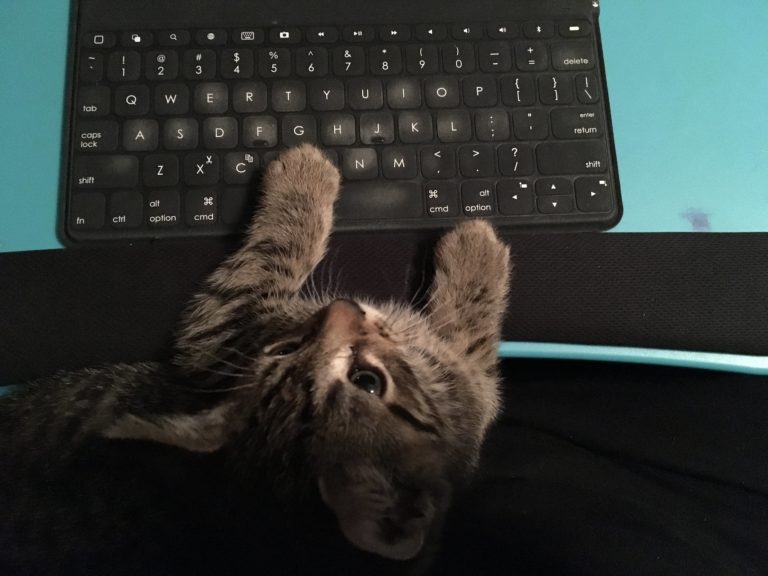 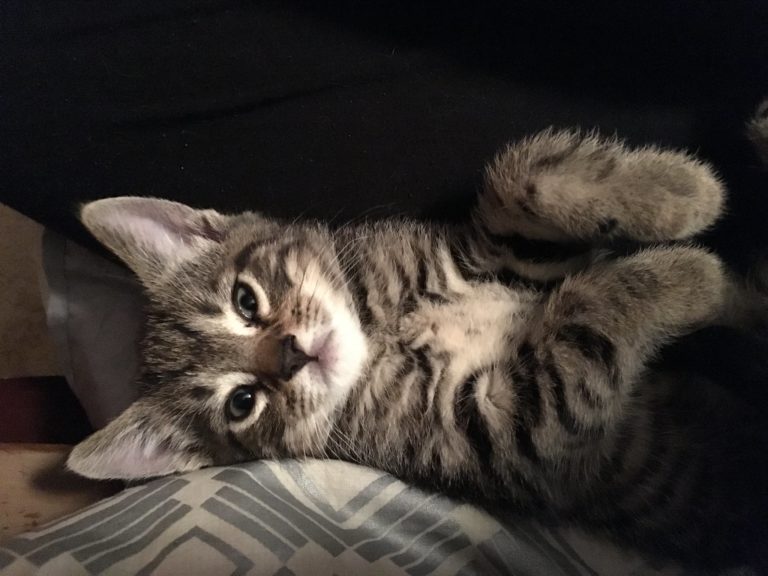 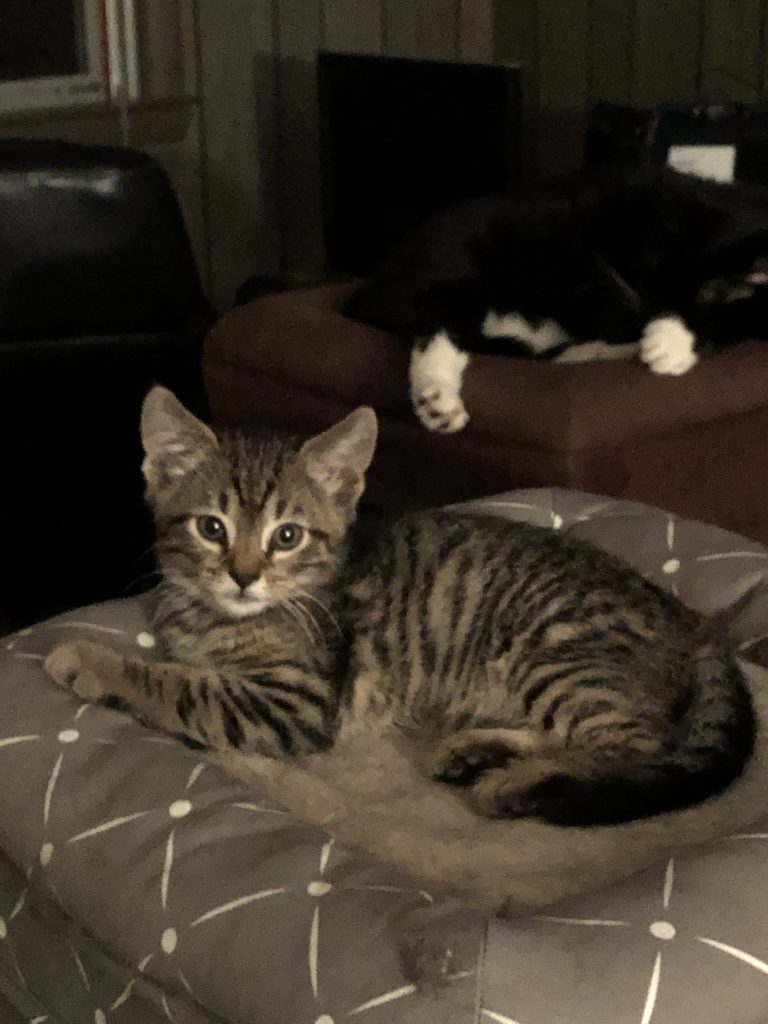 The Big Cats, as we keep calling them since they seem impossibly huge now, have done very well. Right from the start they were quite interested in him, but also leery of him. He wasn’t the slightest bit afraid of them, and constantly ran full tilt up to them and tried to climb on them- he was born in a house with several grown cats and a huge dog. They would both hiss and slap at him if he got too annoying, but also would play with him a little bit, and – shockingly – we’ve caught Cayce washing him several times. Of course she may just think he smells bad, but it seems awfully affectionate for someone who slaps and hisses. Although I don’t think Eddie and Cayce ever learned how to play properly – they are siblings and they play by having horrible fights that sound like they are murdering each other. Then they cuddle up together and wash each other.

Here they are trapped in the corner of the kitchen by this terrifying creature: 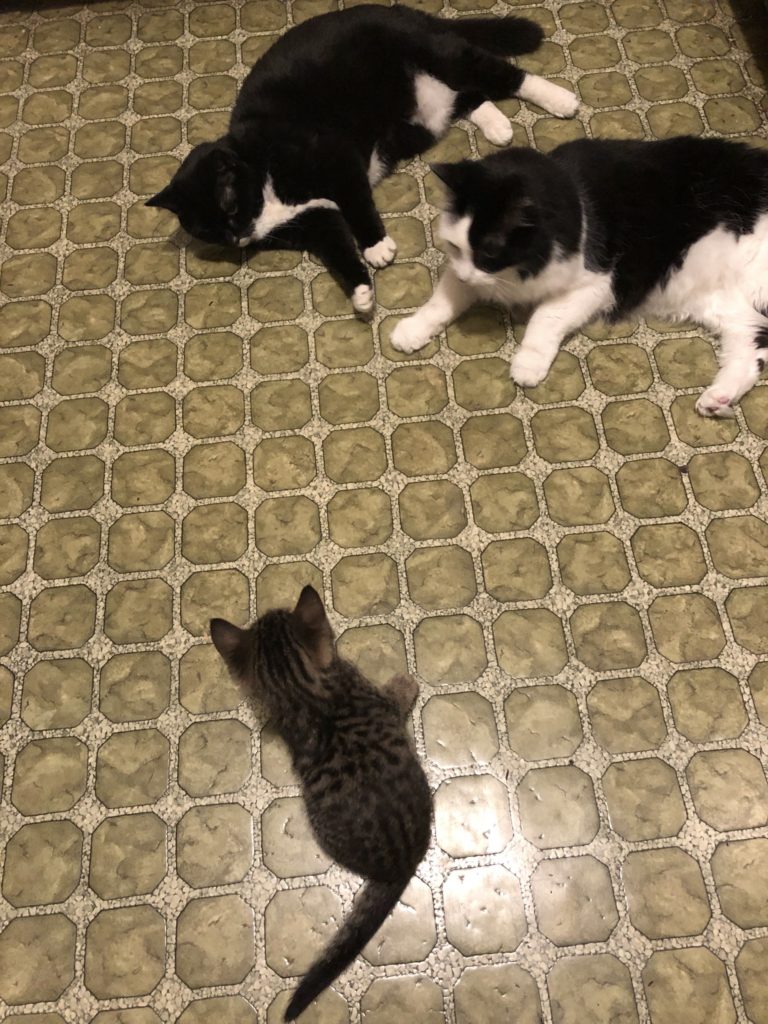 I totally recommend kittens as therapy.

OH, and his name?

What a joy to have him in the house. And he is perfectly named because really how could one be mad or sad looking at him?

My two do that sibling fighting thing too, and some days it is fine and some days it drives me raving into the other room and they come out all sweetness and light and ask what is the matter???

A kitten can definitely help bring some joy into a sad heart . Hugs!

The absolute BEST therapy! He has totally got the cute factor times 100 and I'm so glad Eddie and Cayce have accepted him into the fold :) Willow and Bailey used to do that play thing - fur flying everywhere - me convinced they're murdering each other - then the whole washing/licking thing going on as though butter would melt!!

Thanks for the comment on that 2014 entry - now made private. I didn't tick the 'mark as revised' box either so it shouldn't have shown up - so much for THAT option!