How have I gone two months without showing up here at all, let alone making an entry?? And I was so determined to start writing regularly again. Although I suppose an entry every two months could be considered “regularly”. I’m only doing one now because I am ticked off at my workplace– well, to be specific I am ticked off at another department which I’ve just decided I’d best not name. Because this department is the Golden Child and it gets all the money and all the support and all the glory… and it’s just gotten my department’s lovely plans for a renovation.

We work in a building which was old and decrepit when I was a student, in the 70s, and not in any sort of historically interesting way. It’s just grimy and dark and depressing. To try and make a long story shorter, when our newish dean arrived a couple of years ago, she decided she was going to hit the beings who are in control of funding up for a renovation. And, much to our astonishment, these renovation plans actually became reality. None of us really expected anything to come of it - there is never money for ANYTHING, not for normal not-golden-child departments, and although our office suite is dark and gloomy and badly lit, it’s not at the point of being condemned, so we didn’t think she’d ever get the funding. But… she did!! And she had plans drawn up and we were getting high airy ceilings and wood floors instead of icky carpet and a straightforward floor plan instead of a maze and new furniture and windows all around, and a kitchen, and – well, you get the picture. It actually did seem way too good to believe, but we had all begun believing, and we were supposed to start moving to some empty offices downstairs next week so the work could start up here.

So, today the dean tells us…it’s off. Because the damned department which shall not be named is getting a whole new building, and until it’s built they are moving in all the empty offices in our building. Including the suite that we were slated to occupy during our own renovation. Which are empty because another department moved out - Health Sciences, I’ll name them because they are an enormous and fairly new department and it made sense for them to get the fancy new building over by the hospital that opened this fall. And we can’t just reschedule because this building is swing-space now for a bunch of other offices who have buildings that are being renovated or built, and we would mess up THEIR schedules. Never mind that Golden Child Department just destroyed OUR schedule. That’s okay because they are the Golden Child Department.

So yeah, a week before it was all going to start, it’s over and we’re getting nothing. I actually really like my current office - it’s tiny but one wall is floor to ceiling windows, which is horribly cold in the winter but worth it for the light - but I was so looking forward to working in a NICE office suite. A pleasant and welcoming and cheery office suite. For once. And to have it snatched away by this particular department, which gets everything it wants and more, and never lacks a thing in funding or amenities and is quite spoiled…well, you get the picture. It’s VERY galling.

So I am just going to catch up on my writing instead of doing the loads of work I have, because I am annoyed.

Now I’ve gone on too long to write about the tons of snow we got Sunday and Monday - 17 inches!!! And it’s still here. Happily we didn’t lose power, although we were snowed in completely for two full days, and we’re still having ice issues. And I don’t have time to write about the unexpected trip I got to take - which I found out about just after whining in my last entry that I had NOTHING TO LOOK FORWARD TO. I actually went to a conference, in Philadelphia last week! I never get to go to conferences, I’ve never been anywhere for work since I got this job, but I saw this advertised- it was held by the company we just started using for our paperless system, and I’m the “team leader” for our office which means nothing, but I thought why not ask if I can go?? And to my astonishment the dean was thrilled that I wanted to, and OMG I GOT TO GO SOMEWHERE THAT WASN’T BOONE, ASHEVILLE OR MORGANTON!!!

You know, I’m going to do a whole entry about that. It will give me something to write about, hopefully SOON, and I took a zillion pictures. So I’ll leave with a few pictures of Snowmageddon, since to my surprise they’ve all appeared on Flickr even though I haven’t opened the app on my phone or iPad in ages. 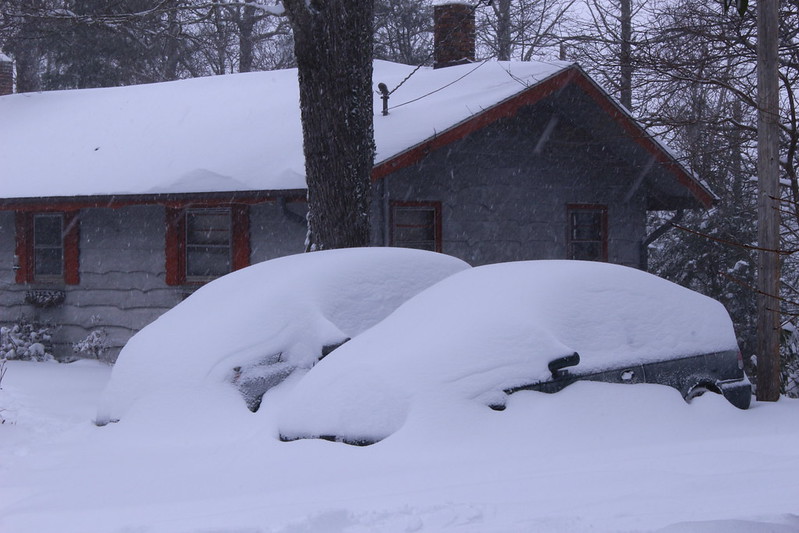 Out the front door at night, with the nearly-filled-back-in footsteps going to the cars and the birdfeeder! I did shovel it out a path the next day. 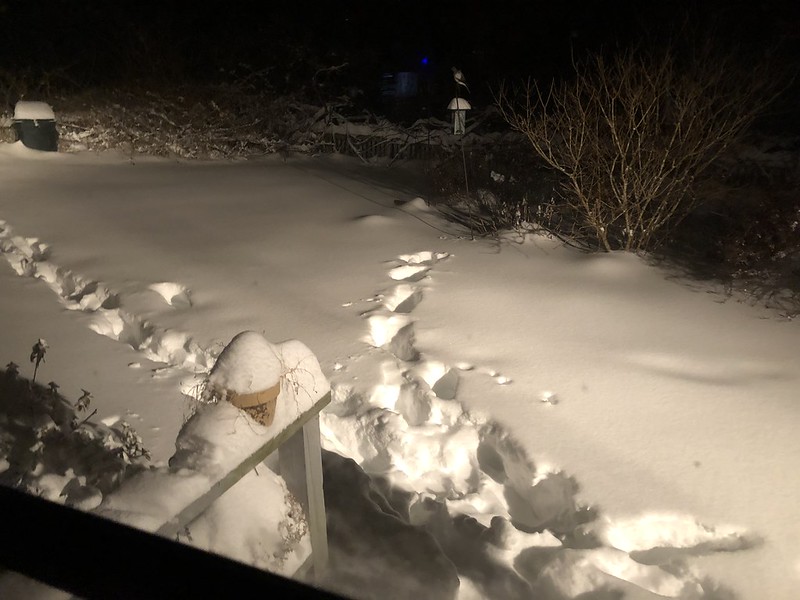 The deck on Monday, when the sun finally came out: 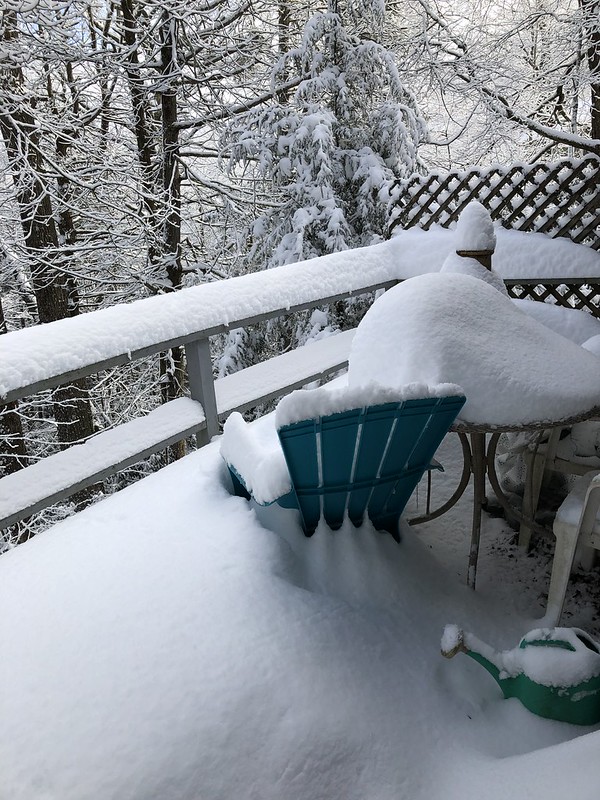 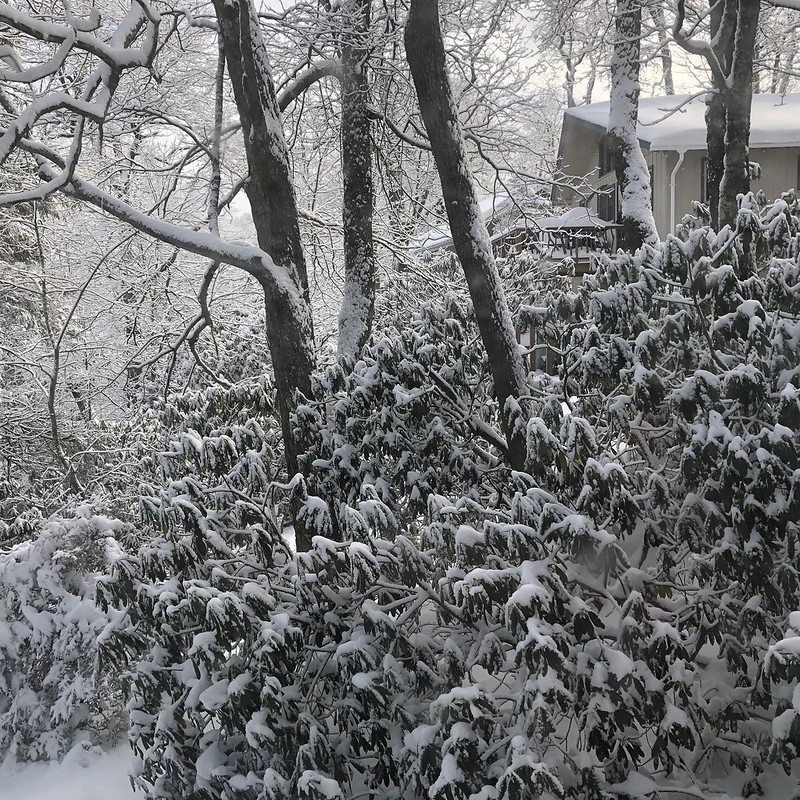 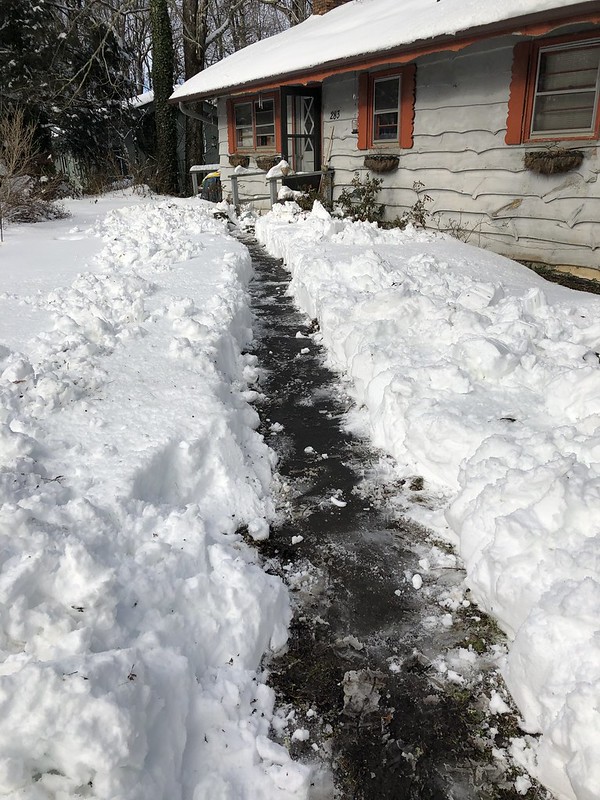 And trying to get out the front door! 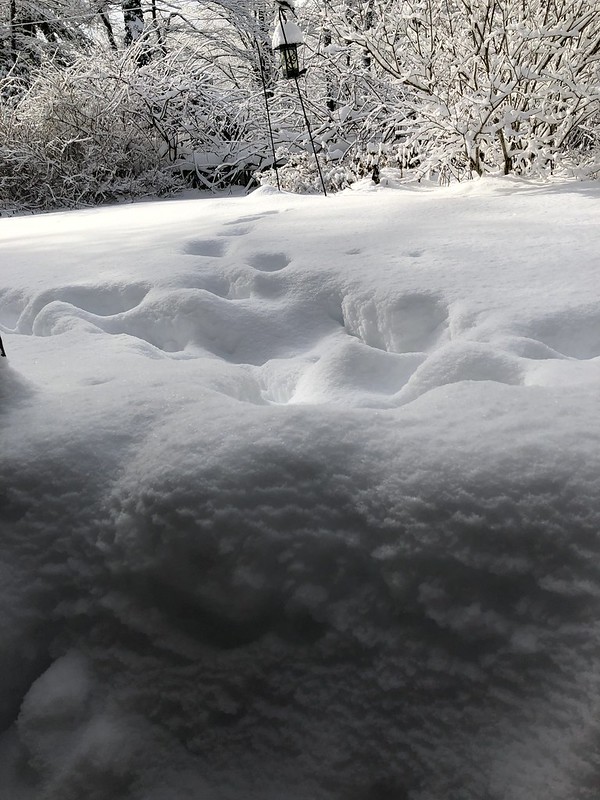 Oh how frustrating! Not fair, not fair. Yeah our big excitement was a new conference room carpet last year. My bosses office is so cold I either try to pretend I am not shivering or casually say, oh I was just going out and that is why I have my coat on...Not that he speaks to me often enough for this to be an actual problem. Anyway, I feel your pain. How exciting to get to run away from home for a few days for work! Paid for. Your snow is impressive may I just say. :)

It was SO EXCITING to actually get to go somewhere for work! I kept thinking it’s kind of pathetic to be so thrilled about a couple of days for at a conference in Philly, but... boy it was fun to get to actually go to a conference. And I would be pretty excited about new carpet at this point. Or actual heat.

Ugh that's soooo frustrating on the reno front - totally unfair!
And my God that's a LOT of snow! But your house sure is pretty under it :)
Looking forward to hearing all about the conference - don't make us wait another two months😁

LOL!! I am swearing that I will not wait months. Why is it so hard to ...WRITE?!? When I looooove to write!!

I think we've both being saying those words at various times for around 17 years now!!😁

That would be upsetting, to be promised a new office suite and then for someone else to get it.
You do have a lot of snow, it looks very pretty though.

It was really pretty, and since the power stayed on I actually enjoyed it! I’m ready for spring now, though.

Sorry about your plans getting canned. That is so unfair .
You really did have a blizzard ! Did they let you off work I hope ?
So good to see an entry from you !

We actually did get to take Monday and half of Tuesday off, although we had to take vacation. They have this weird system with the university where there are three “Conditions” - 1 means non-essential employees (which I am) can use their judgement about coming in, so won’t be penalized if they don’t feel it’s safe; 2 is non-essential employees should stay home, and 3– the rarest of the rare— is we don’t come in and we don’t have to take vacations. All these days were Condition 2 but I do have a ton of vacation so that was okay.