TS4 Random in The Sims


No story with my Sims 4 entry this time, I’ve been playing too many Sims at once to get a coherent story. I just figured I would share a bunch of the pictures I’ve taken in game since I last posted an entry. Which, by looking back, has been since February. Crap! Honestly that’s how long it’s been since I’ve played the game for any amount of time. I can’t wait to get Cats & Dogs.

Once I do you KNOW I’ll post my experience. I’ll get to introduce you to the character I created to live and work in Brindleton Bay (the new world). See, I only have one played Sim per world and everyone else in non-playable. I like it because it’s easy to organize in my head. I have five characters I’m playing (Patricia, Rana, Ryan, Darla, and Belladonna) and I’ll have six with Kara.

I have a 7th character named Fran that I’m waiting to use in the next new world we get. She just sits in my library folder waiting to come to life. LOL! I don’t know what the new world will be or when it will be released but I imagine there will be at least two or three more before they stop making new content for the series. I would prefer four more to round off at 10 Sims played.

There is Newcrest that I could use too but it’s empty and I hate creating my own world. It just sits there unused because every lot is empty. I like redecorating places, I do not like creating buildings and neighbourhoods from scratch. Some people like that so I understand why they released Newcrest, I just wish there were two versions; one empty and one fully completed.

Patricia taking a selfish in her police uniform. 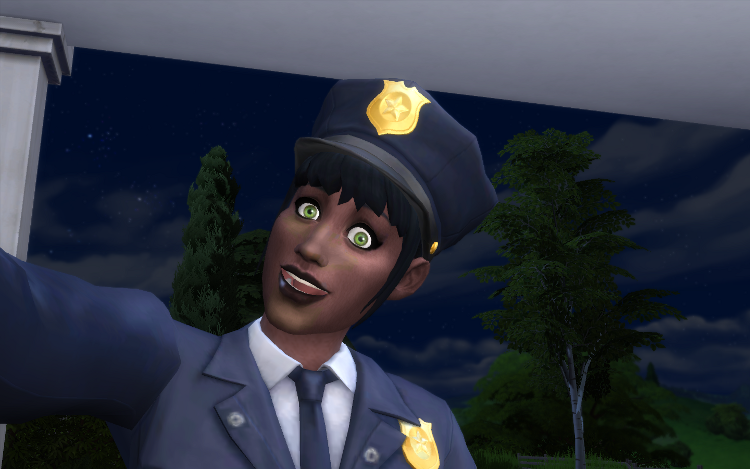 This is a secret lot in Willow Creek called Sylvan Glade. All the secret lots are quite beautiful in my opinion. There are other secret lots in different worlds. 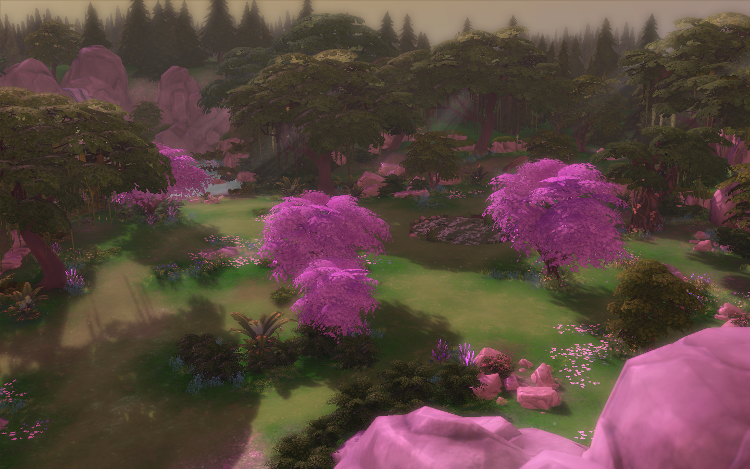 Rana did the Sugar Skull Challenge and was rewarded with this gorgeous Dia De Los Muertos themed outfit. She's at the spa enjoying a refreshing drink. 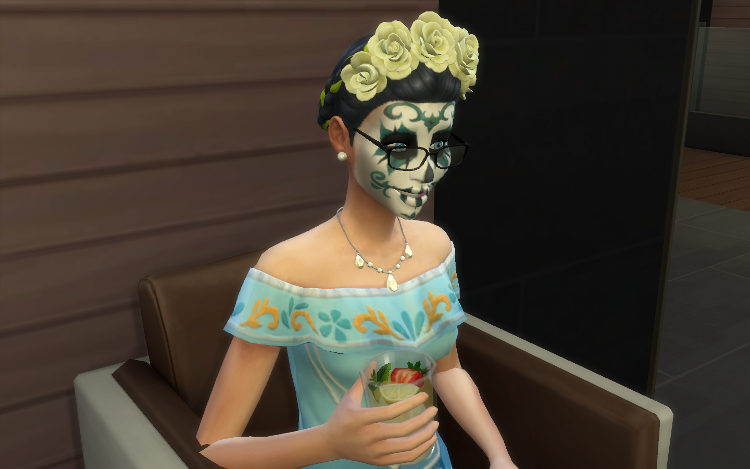 Patricia perfecting her interrogation technique. It's funny watching these adorable little virtual dolls playing hard ball with suspects trying to get a confession. 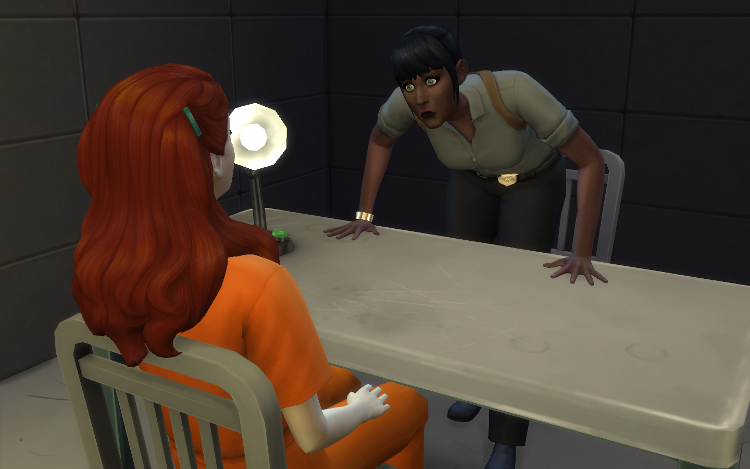 This is the Master vampire in Forgotten Hollow where Belladonna lives. He resides in the big mansion atop the hill overlooking the hollow. Obviously he's a Nosferatu. 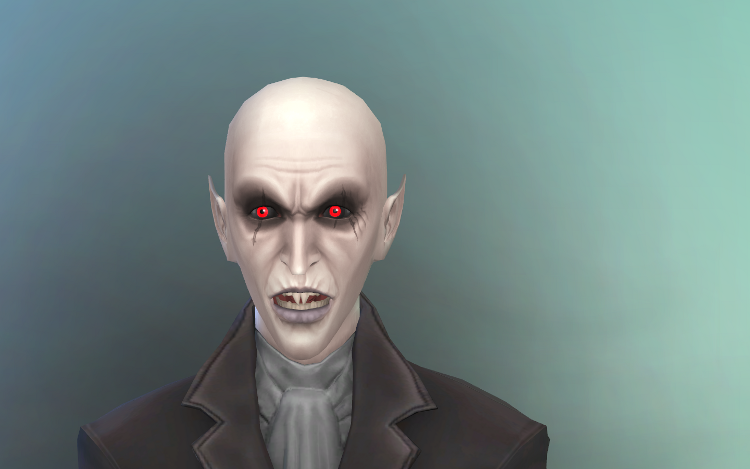 I do not have anatomically correct skins but I know photo sharing sites have had problems in the past with my Barbie-like Sims being nude. Look at her no-nipples and no-vag! Rana randomly dances in the nude. It is not a good look for her. 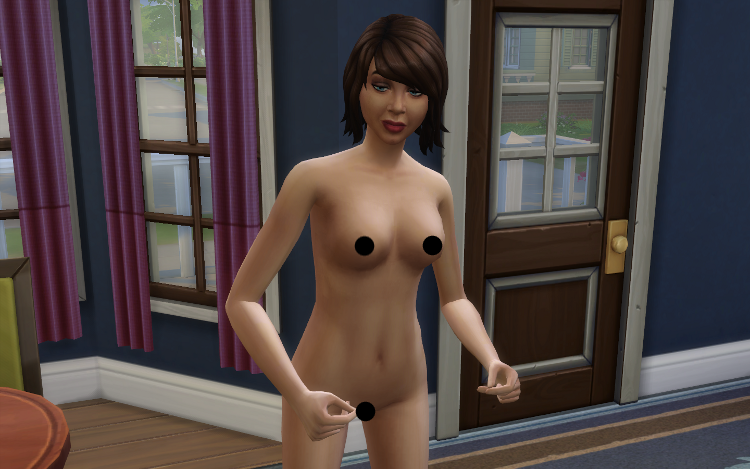 Rana and her girlfriend, Candy, having a snog at the park. 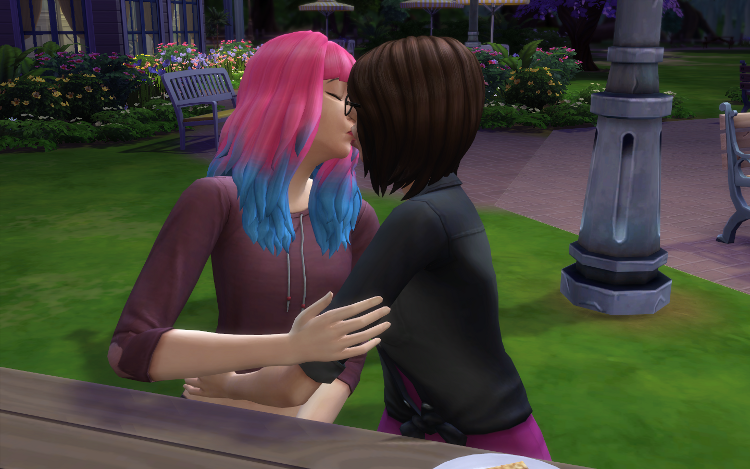 A Sim having her mug-shot taken. 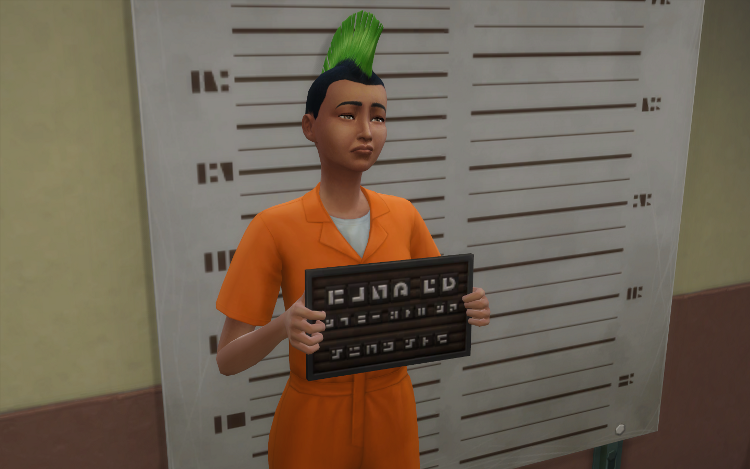 Belladonna encased one of her co-workers in ice. It was something she had to do to increase her career performance and the only co-worker present was a friend of hers. She had to get her out of there by chipping away at the ice. 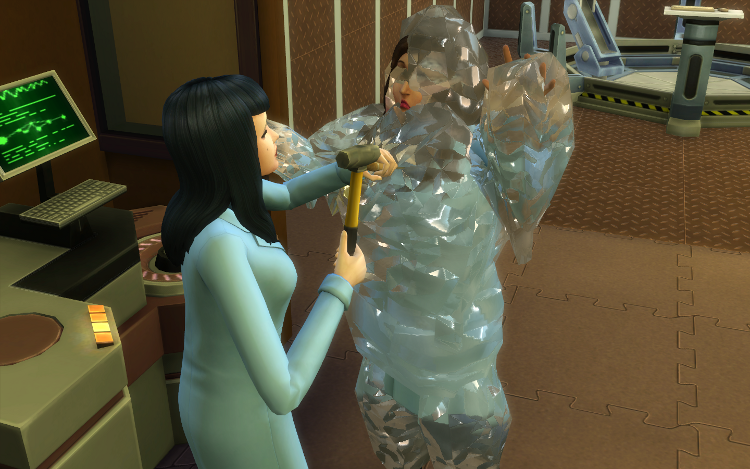 I love this little item that comes with the Backyard Stuff (I think). There is a bunch of different birds that show up. Don't try filling up the feeder when the birds are present though because they will attack the shit out of you. Jerks! 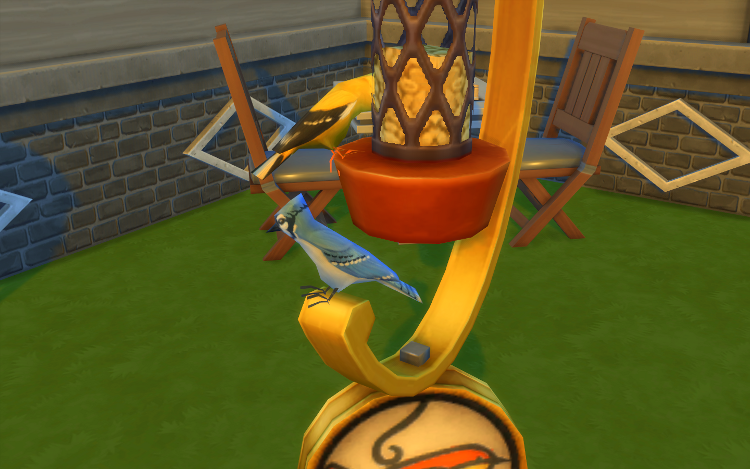 Rana trying some curry at the Spice Festival in San Myshuno. 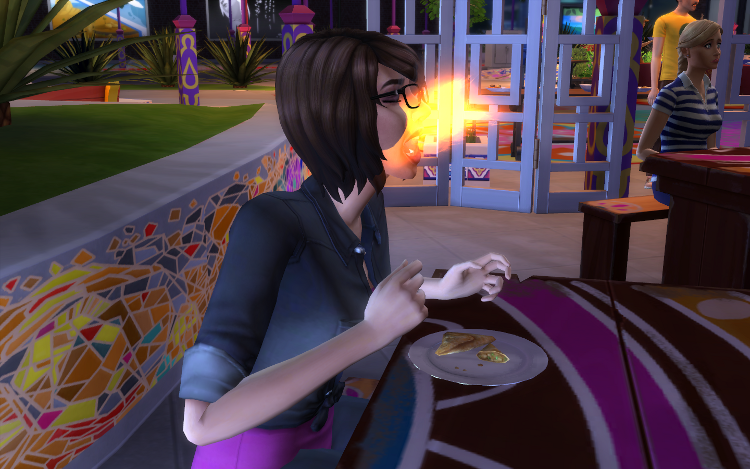 I don't know which pack it came with but there are portable ear buds that your Sims can listen to music where ever they are. Rana finds it very soothing after a long day at the hospital. 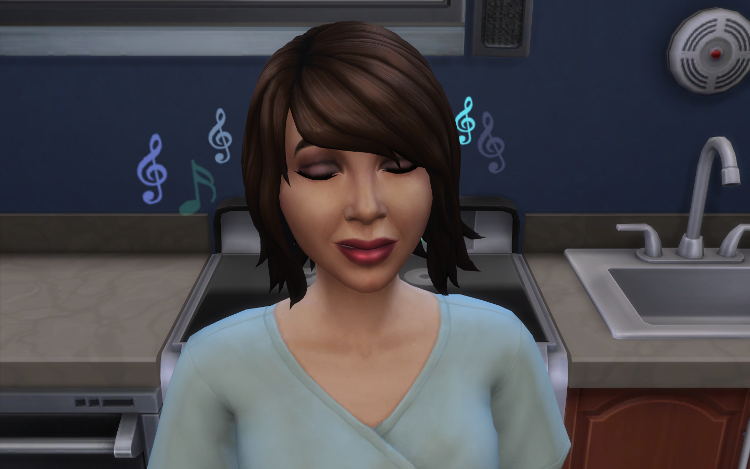 A little woodpecker I found in the forest in Granite Falls. That's the camping/vacation spot that came with the Outdoor Retreat game pack. 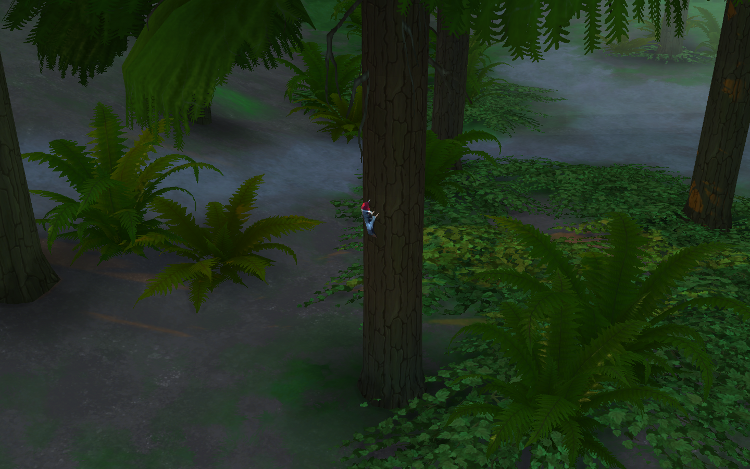 I found this little guy galloping away also in Granite Falls. He stopped to eat a VERY blurry looking nut. None of these animals have high details which sucks. 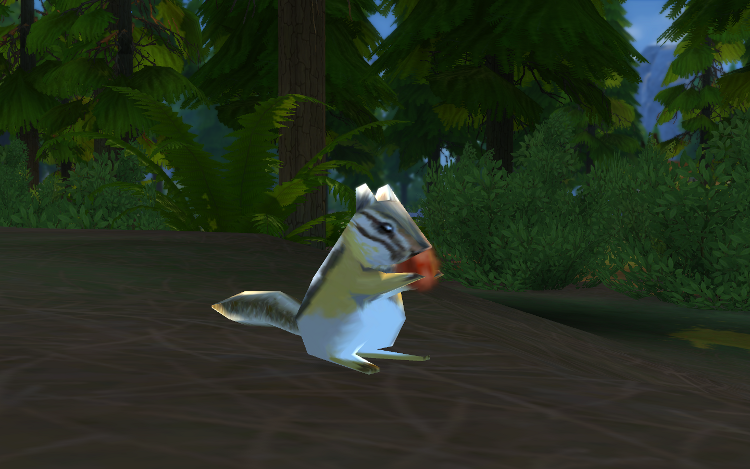 Another method that Rana uses to relax after work is heading for the washroom and putting on a facial mask. I'm jealous of how relaxed she looks. 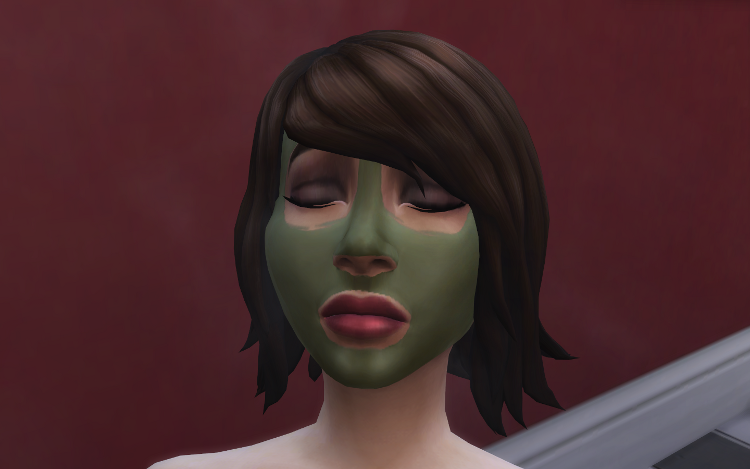 One of the fake cars that makes the rounds in Willow Creek. I miss owning cars in The Sims. They took a step back with the Sims 3 because they didn't create animations for getting in or out of the car. The Sim just appeared next to and in the car. Now they've gotten rid of Sim-owned cars all together. I don't think we'll get them back. 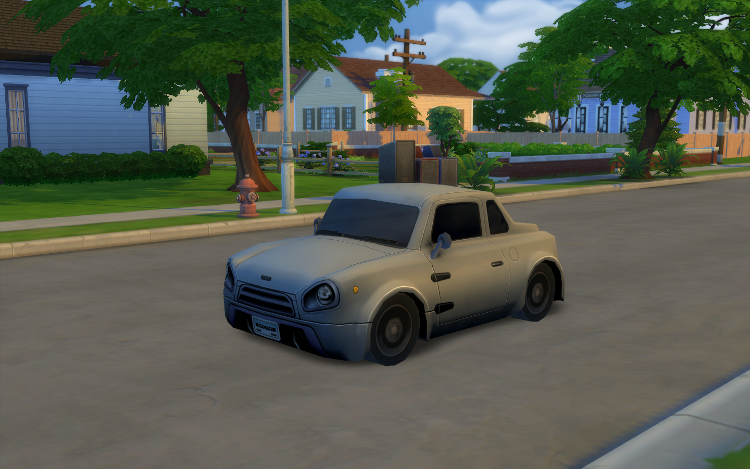 A DJ at a weird party Patricia was invited to. 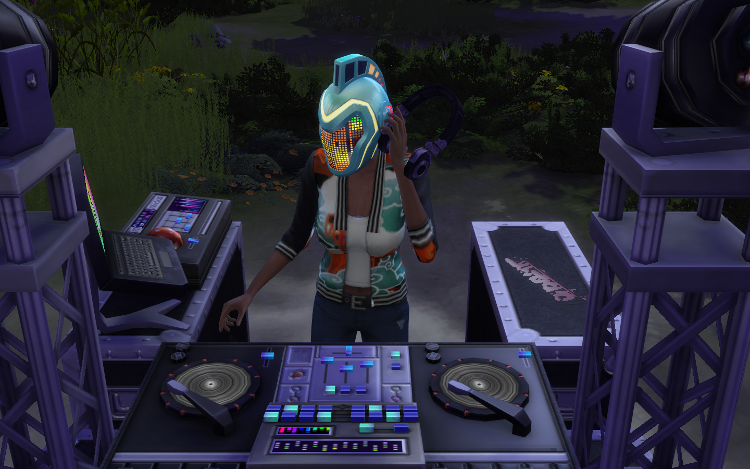 Patricia and her best friend Eva went on a camping trip together in Granite Falls. As I was taking care of Patricia one morning I noticed that some how Eva set herself on fire. She was singed but she still had her prissy pride! LOL! 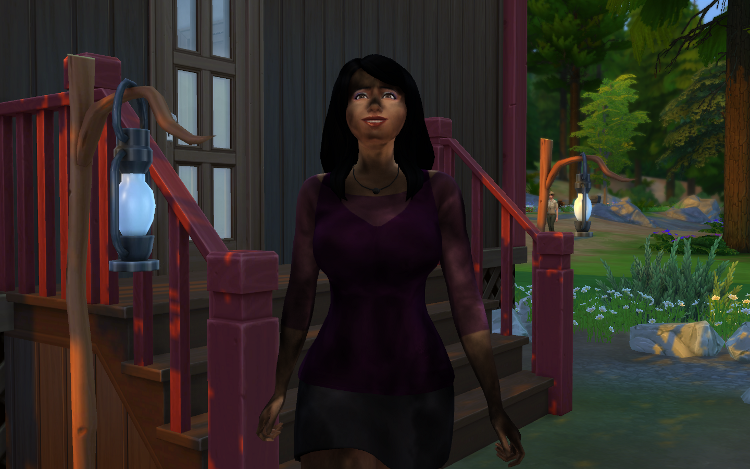 With City Life came all these useless festivals. There is another one called the Humor & Hijinks festival. If you drink what Patricia has in her hands you have to tell funny jokes and stories constantly so your side (Humor) wins the festival. 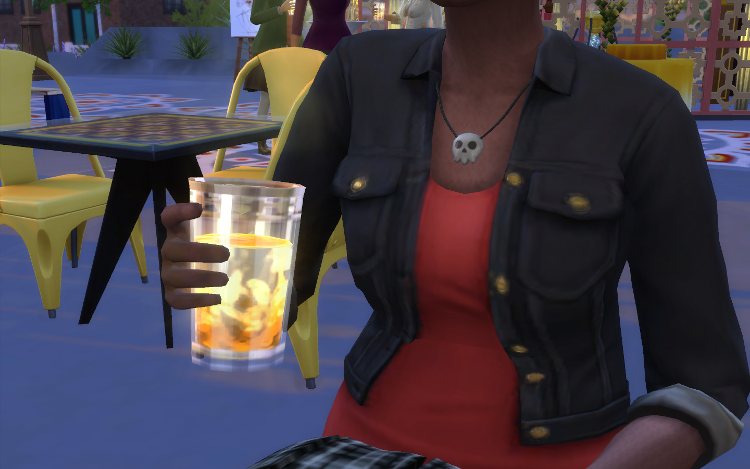 If you drink what this dude has you have to create a bunch of mischief so your side (Hijinks) wins instead. I went to these like once or twice and then I was over it. 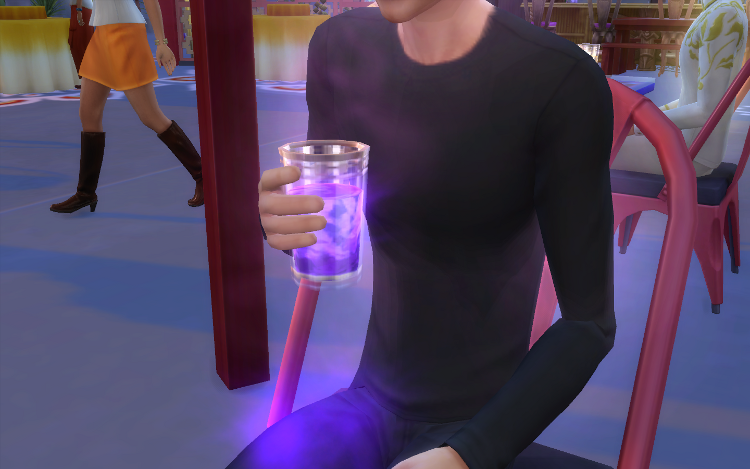 Patricia's girlfriend, Maaike, striking a pose while out on a date. 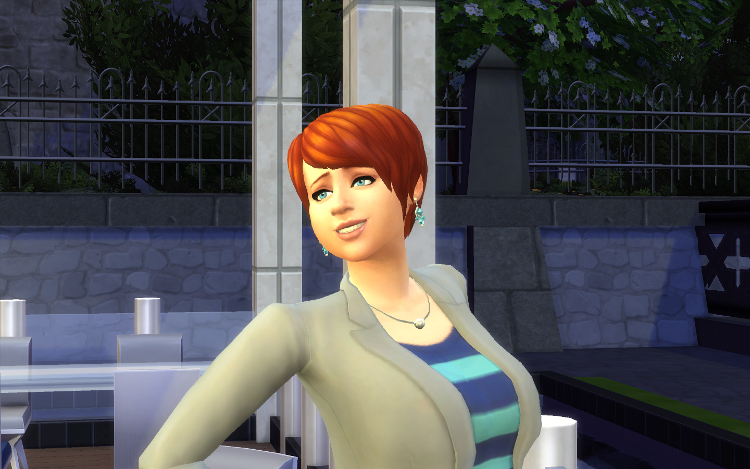 Rana's best friend, Summer, striking another pose before they workout together. 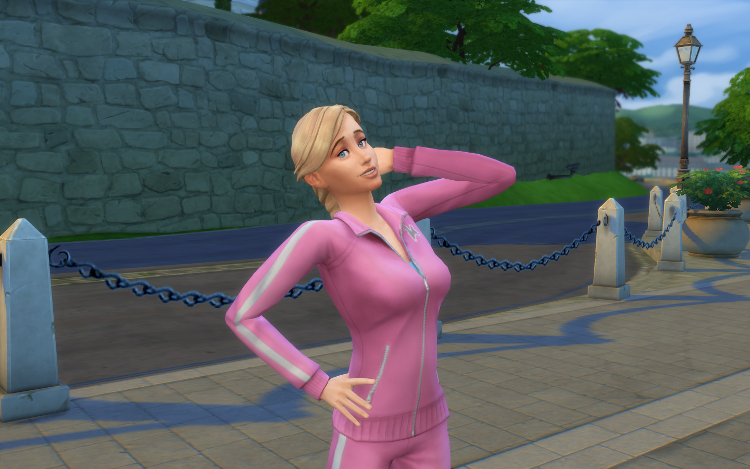 COWPLANT! Pat tried keeping one as a pet but she forgot to feed it so often it died. I was sad. 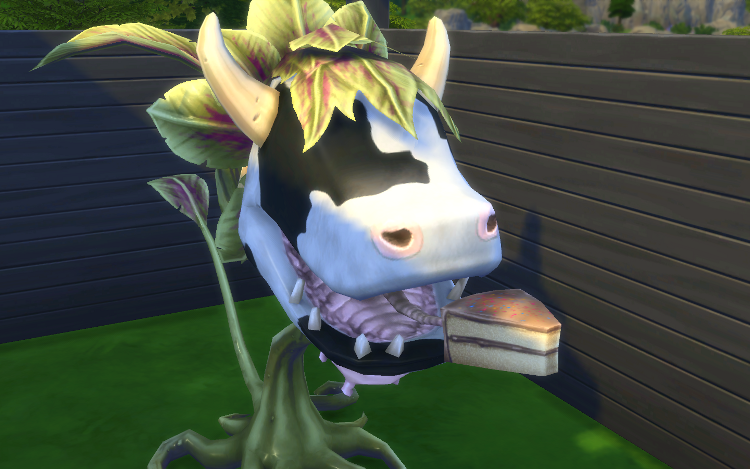 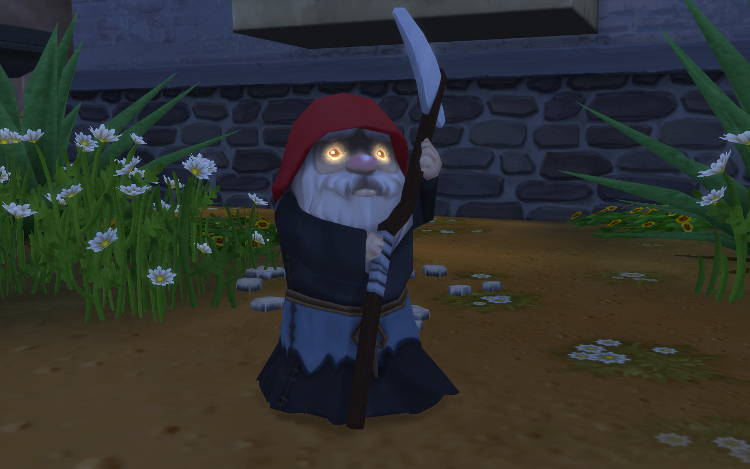 Patricia searching an inmate and finds a stinky fish. I don't think I want to know WHERE exactly she located that nasty thing. 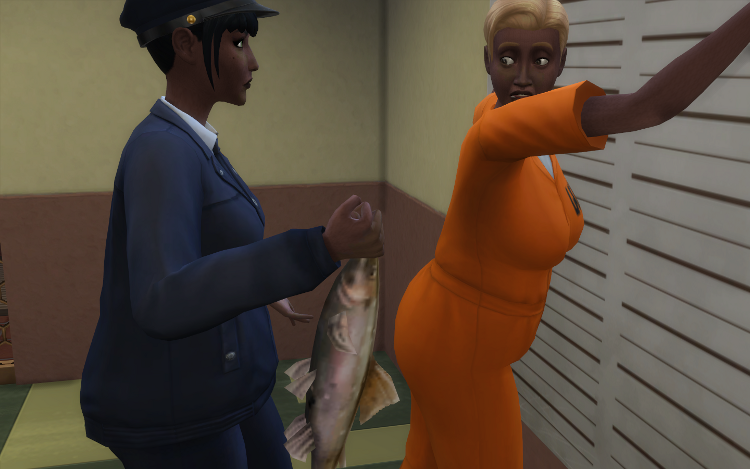 This is Ryan in her bedroom. 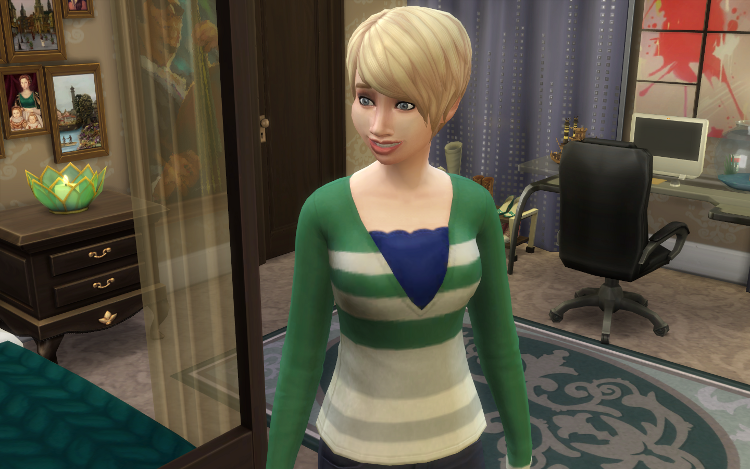 When you go to the Spice Festival there is a fountain that you can toss coins in and make wishes. I was surprised the detail was so good on the coins when the wild life in Granite Falls is sorely lacking on high details. It's neat looking at least. 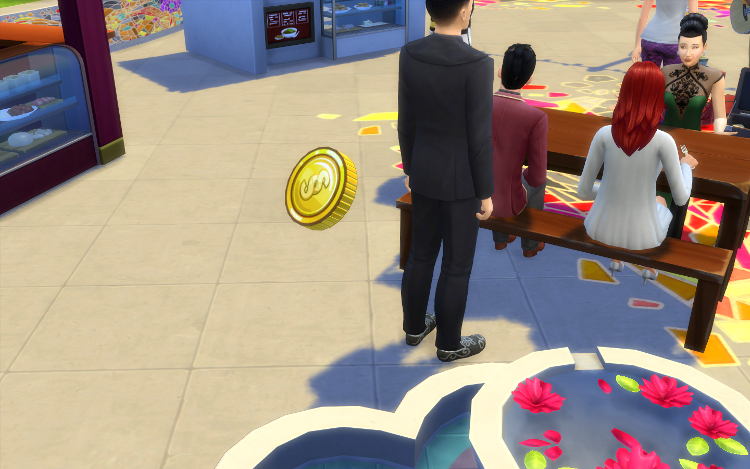 I found this random dart stuck in the floor. Never seen that before. 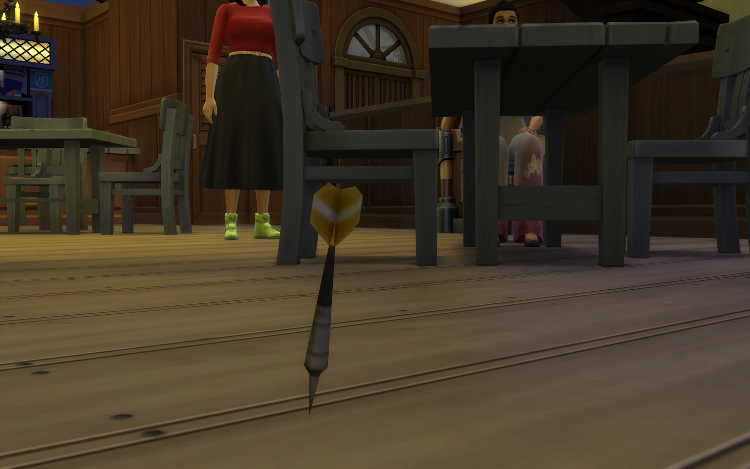 Rana and her girlfriend having some fun in the hot tub. Rana is making good money as a doctor so I bought and designed a little hot tub area in the back of her home. 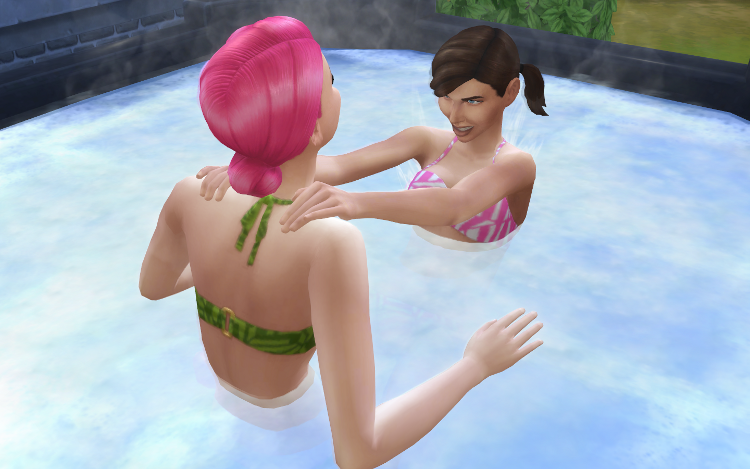 Last photo is of Ryan choking while using the bubble blower. I want one these in real life. They are supposed to be the PG version of a hookah but they sound so much better. The bubbles are basically edible and come in lots of different flavours. How fun does that sound? They can get a little high on the bubbles hence the hookah correlation. 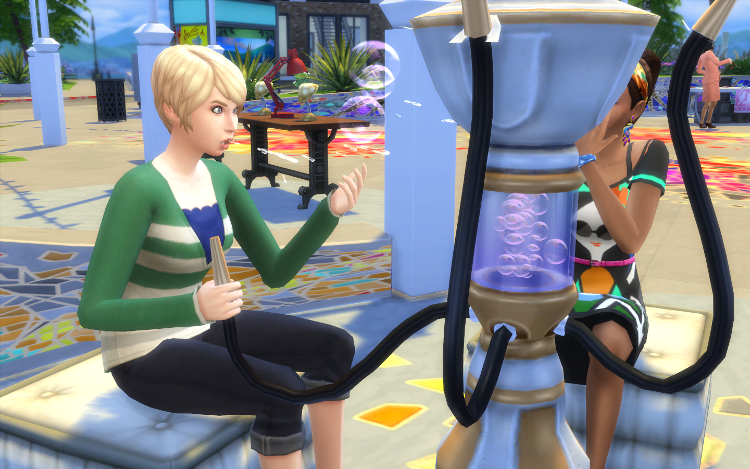