I keep trying to make an entry, especially after I got so fired up by writing more in the last few weeks than I have in the past year or so, but. I just stare at the blank page and then wander away again. I’m currently at work, and we’re in an oddly boring slow period. I think I’m so bored it’s frozen my brain. And work has been… weird. I mentioned earlier that Mr. Organized and Miss Tattoo and I got moved out of the main office to a little maze of offices that are way off down the hall. Which in many ways is great - it’s a lot quieter as far as foot traffic goes. Our previous area was where everyone came to see the dean or associate dean, and students and faculty would drop by constantly. We’d end up dealing with them instead of whoever they actually needed since we were right there in front of them as they entered the office suite. And we were all three constantly being interrupted by things we have nothing to do with. So the move has been great for fixing that. Our new offices are way off down a zigzaggy little hallway and not part of the main office, so people don’t realize we are actually connected. Yay!

On the “this is weird” side, though, we are feeling mentally cut off from the main office as well. We’ve gone from being a central component of the Dean’s Office alongside coworkers we’ve been with for years, to being in a strange, seemingly unconnected grey zone. Again, I would be fine with this except that it’s.... unsettling, somehow. And I know it’s because we have a new dean who is a total stranger to us, a new dean’s assistant, and several other people that aren’t technically brand new but thanks to working from home for a year and four months, we’d hardly met in person. It’s like being in a completely different office, and one that we barely know anything about. Now the three of us are the only ones who have been here for any amount of time. Luckily we really like each other and feel bonded amongst ourselves, not abandoned to the wolves! And I’m sure all these new people aren’t wolves. I’m sure New Dean will be FINE.....

SO. That’s my life lately. Pretty dull! As I mentioned earlier, we’ve gone nowhere, we’ve done nothing. I have cancelled my October trip to Delaware because Baker B was really really REALLY concerned about it. I think it would have been fine - the riskiest thing would have been flying and between being vaccinated and everyone being forced to wear masks in the airport and on the plane, I wasn’t worried. We were going to stay at a beach house that belongs to Cousin J’s friend, just the four of us, all vaccinated. I think he’s being overcautious, but also I think overcautious is better than under-cautious, annoying as it is. Cousin J’s vaccinated, very cautious husband came down with Covid a month or so ago and although he wasn’t hospitalization sick - vaccinated!!! - he felt pretty horrible for five or six days. Also, it’s pretty bad here. The hospital is full - one of our new mysterious-to-me coworkers has some health issues and is going to have to have surgery in Atlanta next week. Winston is a lot closer but couldn’t work him in till late October. His specialist said if he’d been able to spend a week in the hospital here, he’d have been fine by now (he’s got some sort of blood clot issue that was worsened by falling recently), but our hospital had no beds and they sent him home to decline.

All to say, I don’t blame Baker B’s nervousness. I blame all the eedjits who won’t get vaccinated and won’t wear a mask on their stupid faces. But I am not going on a rant about THAT now.

Kim and I DID go to the Immersive Van Gogh Exhibit in July, though, which was just incredibly fun! Also incredibly hard to describe. Basically it’s a series of enormous projections of Van Gogh paintings - and interpretations of them in motion - projected on the walls, floors, etc of this big room (we were in an old car manufacturing warehouse which is part of an area of once-abandoned but now arty stuff warehouses) - immersing you.

Oh, look, here it actually is, the whole thing, on You Tube! Of course this isn’t exactly immersive, but you get an idea of what the projections are, and hear the amazing music.

The music is mostly by Luca Longobardi, who I’d never heard of - some of his own work apparently, and some other composers- Handel and Bach being my favorites. They also threw in Pictures at an Exhibition, fittingly, and Edith Piaf, AND the lovely Thom York. For starters. So, a fun and gorgeous mixture that went amazingly well with the paintings.

I took ten million pictures, of course. I won’t post them all. You’re welcome. 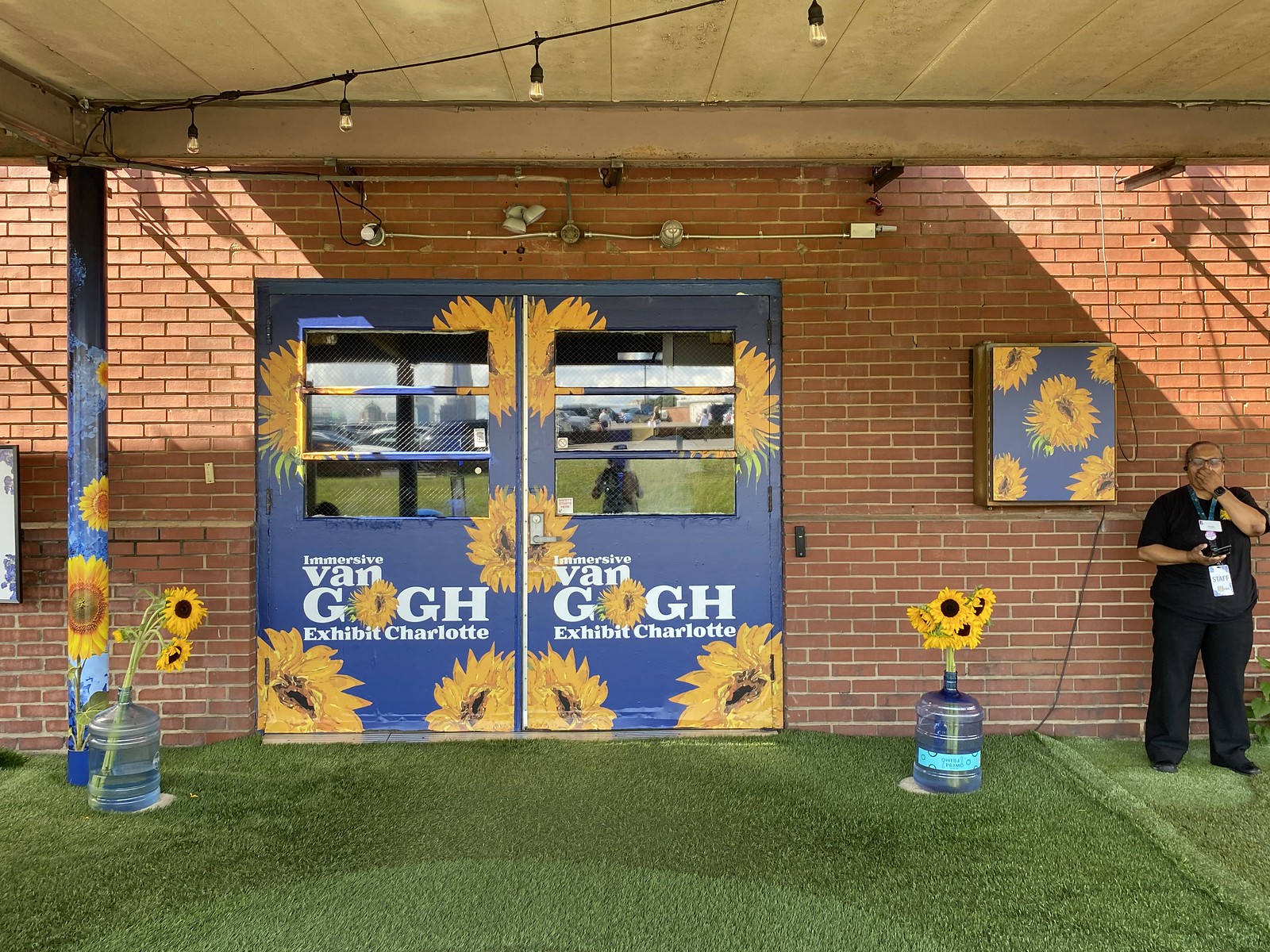 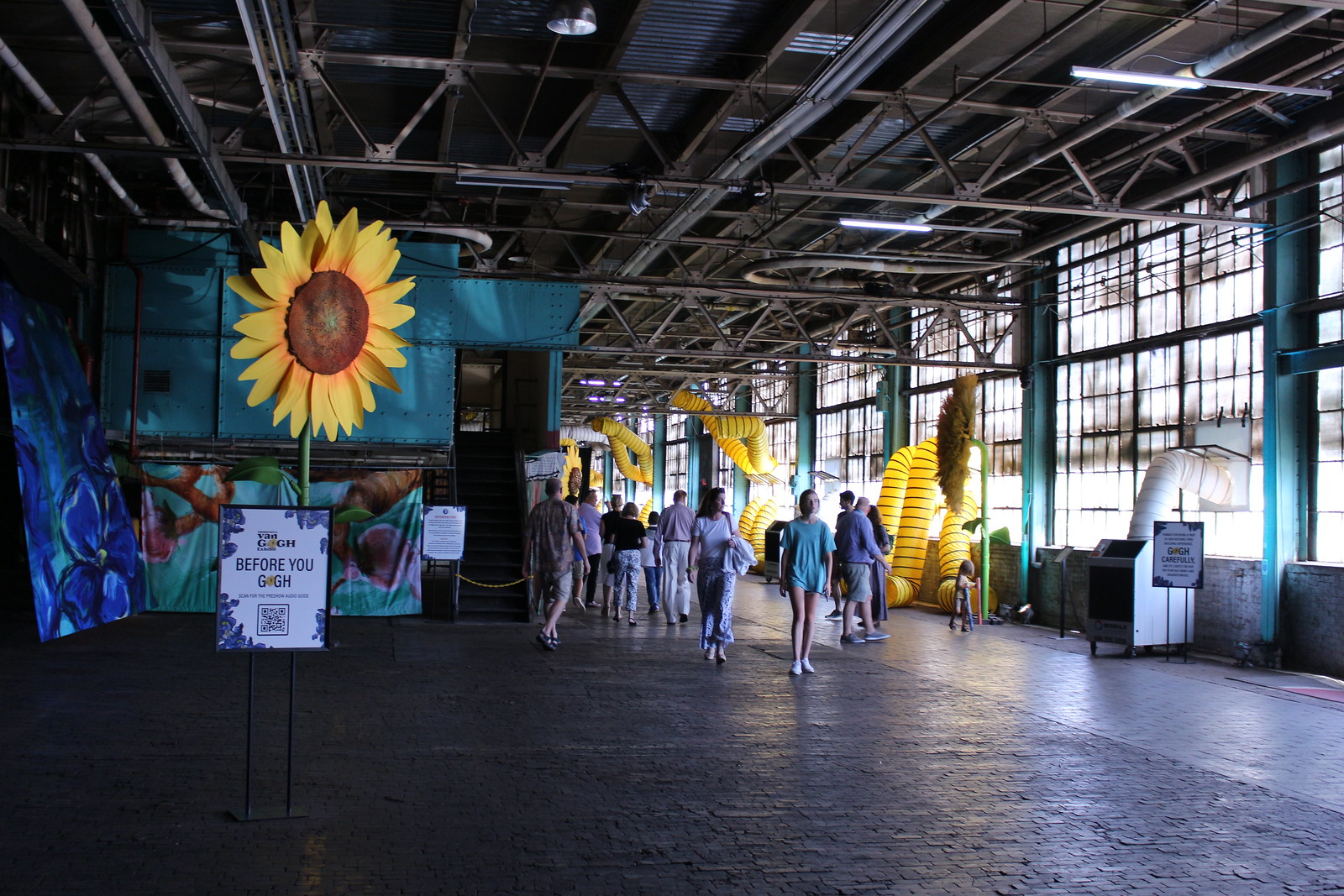 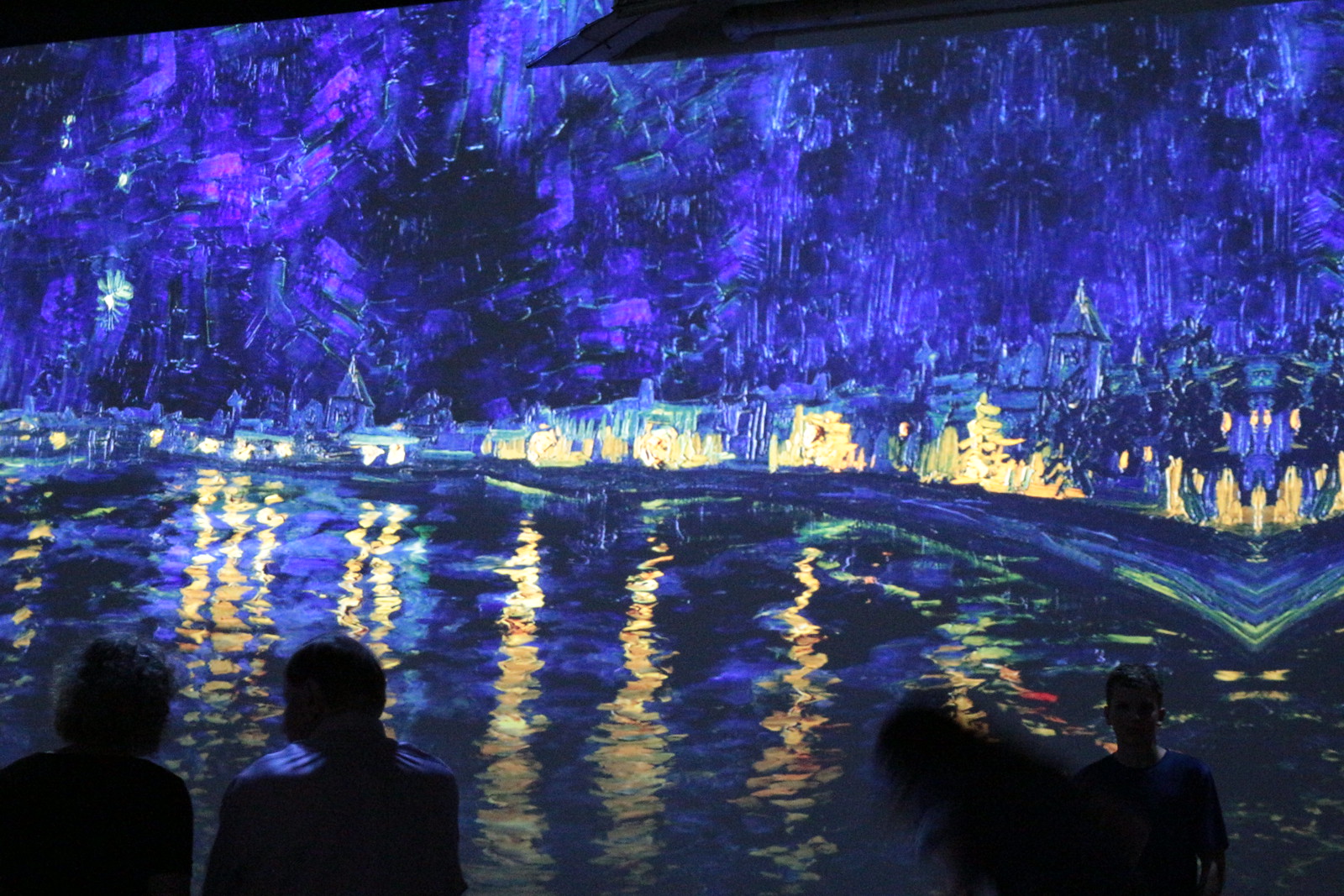 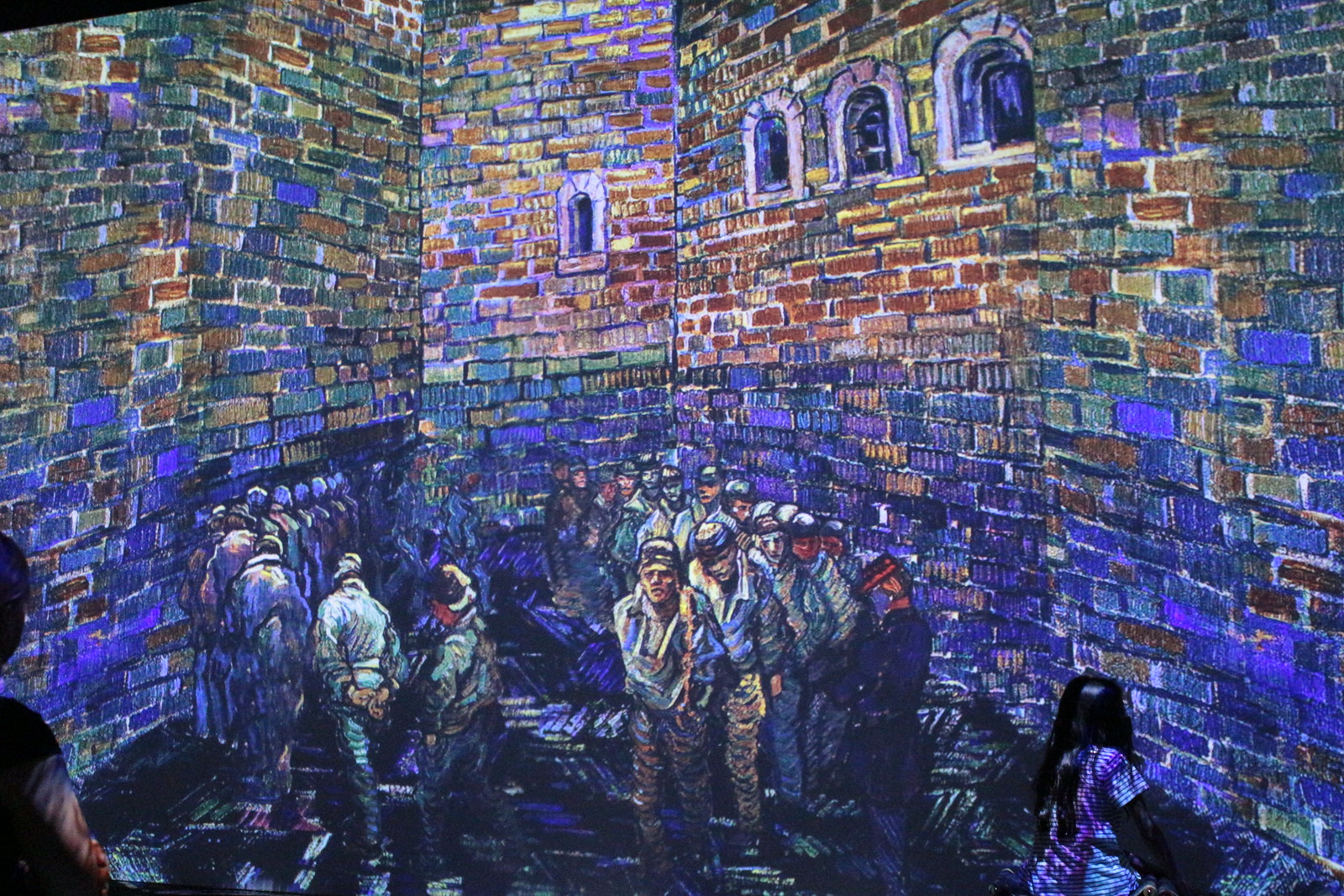 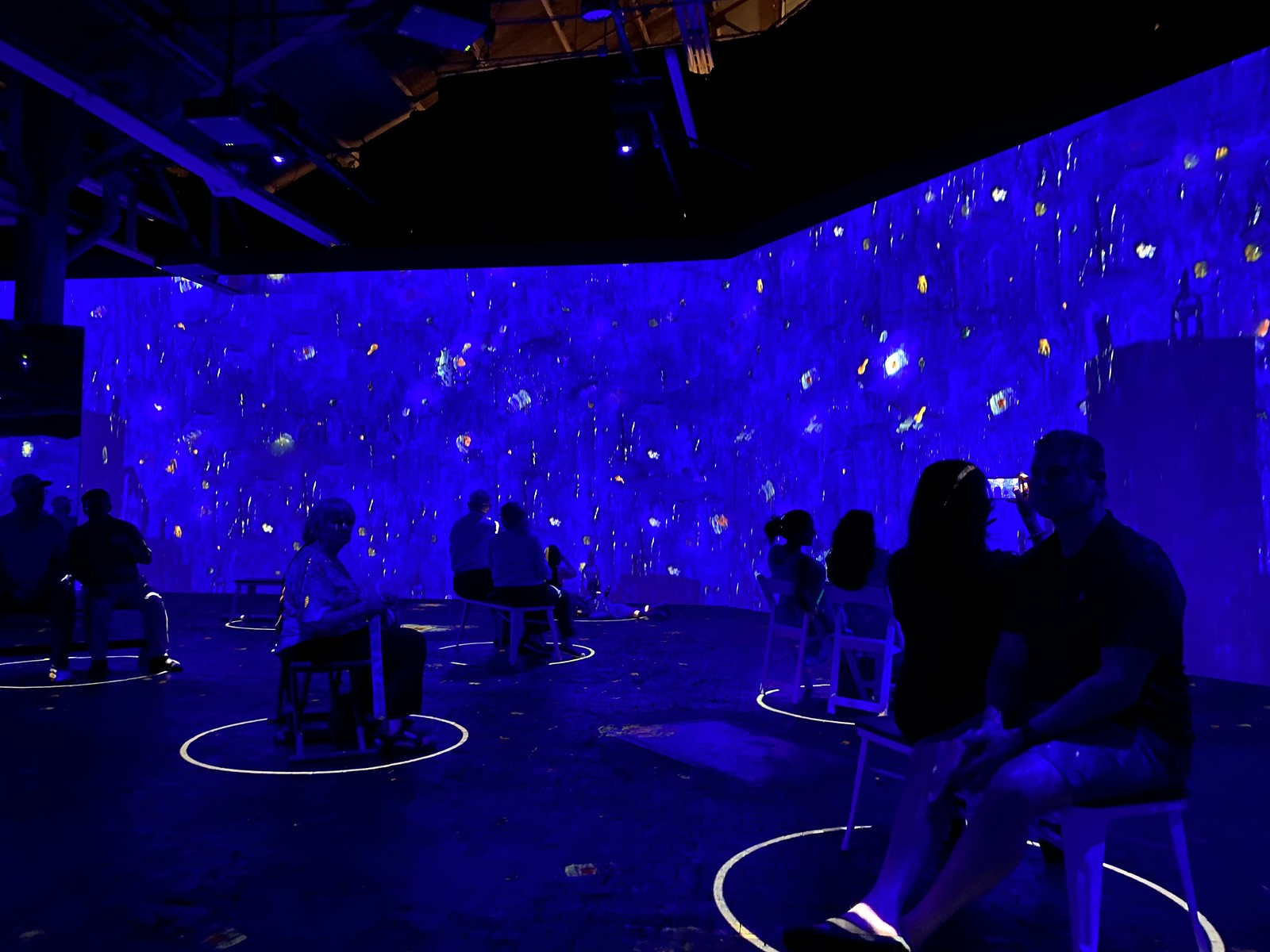 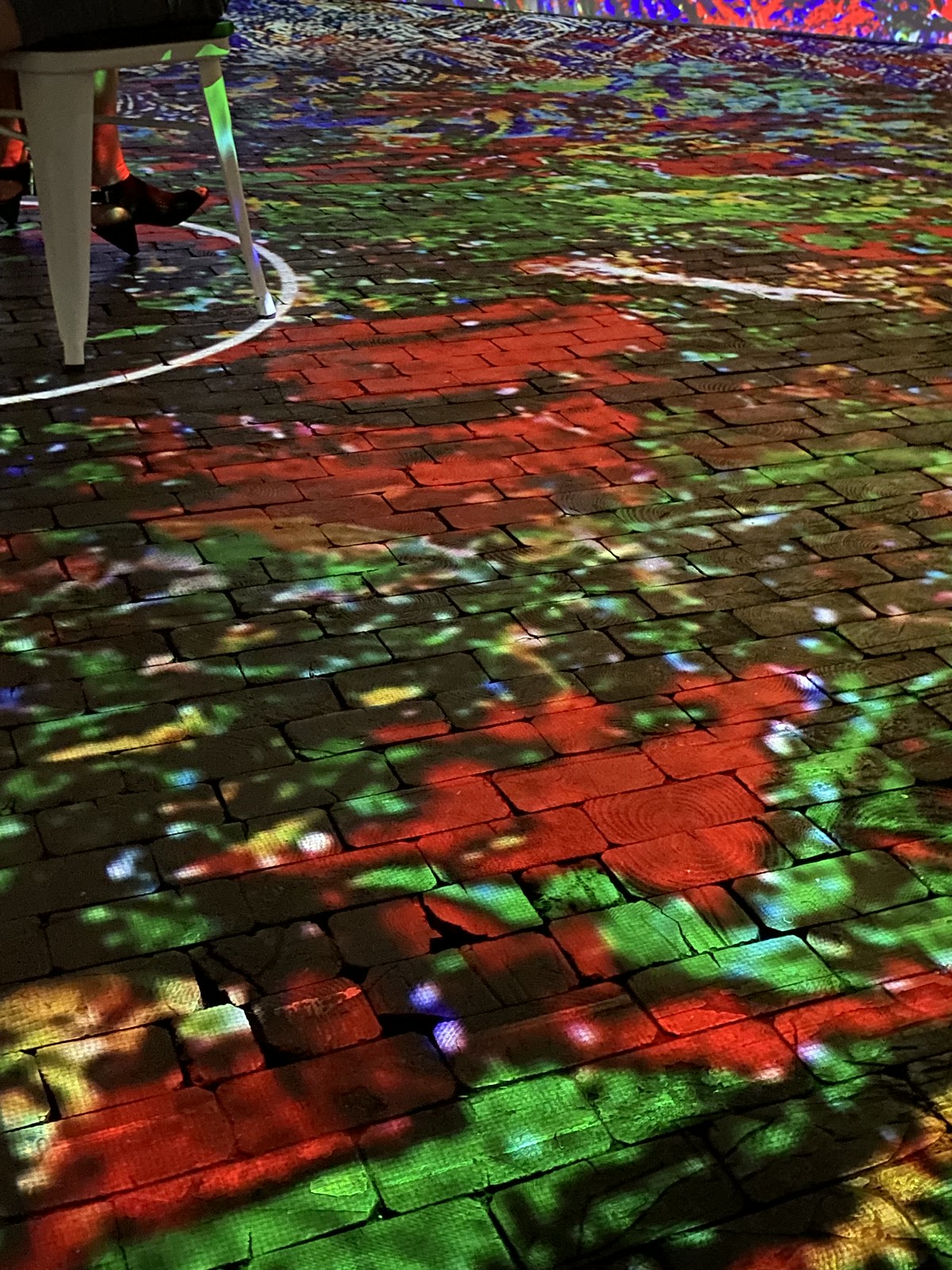 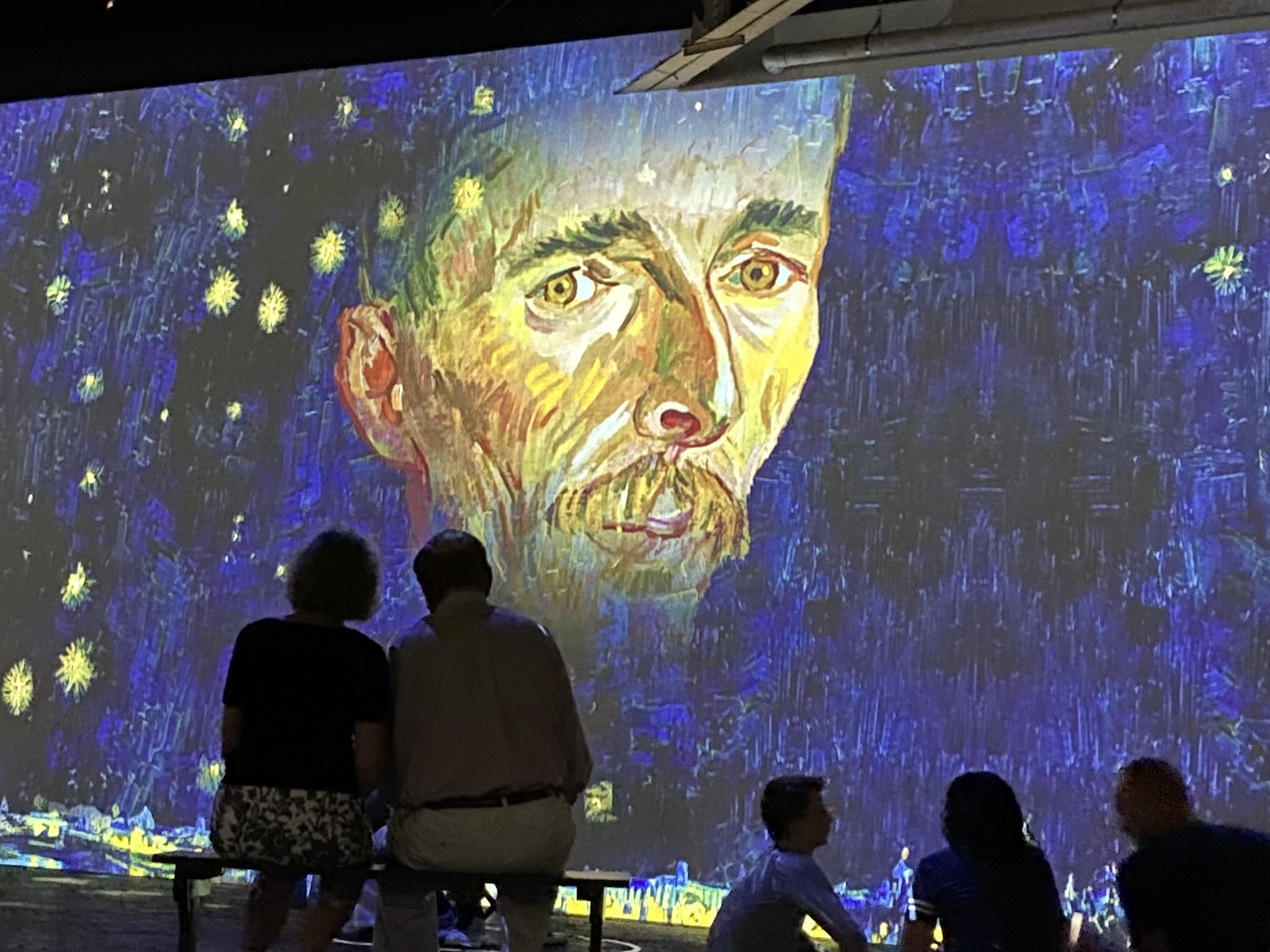 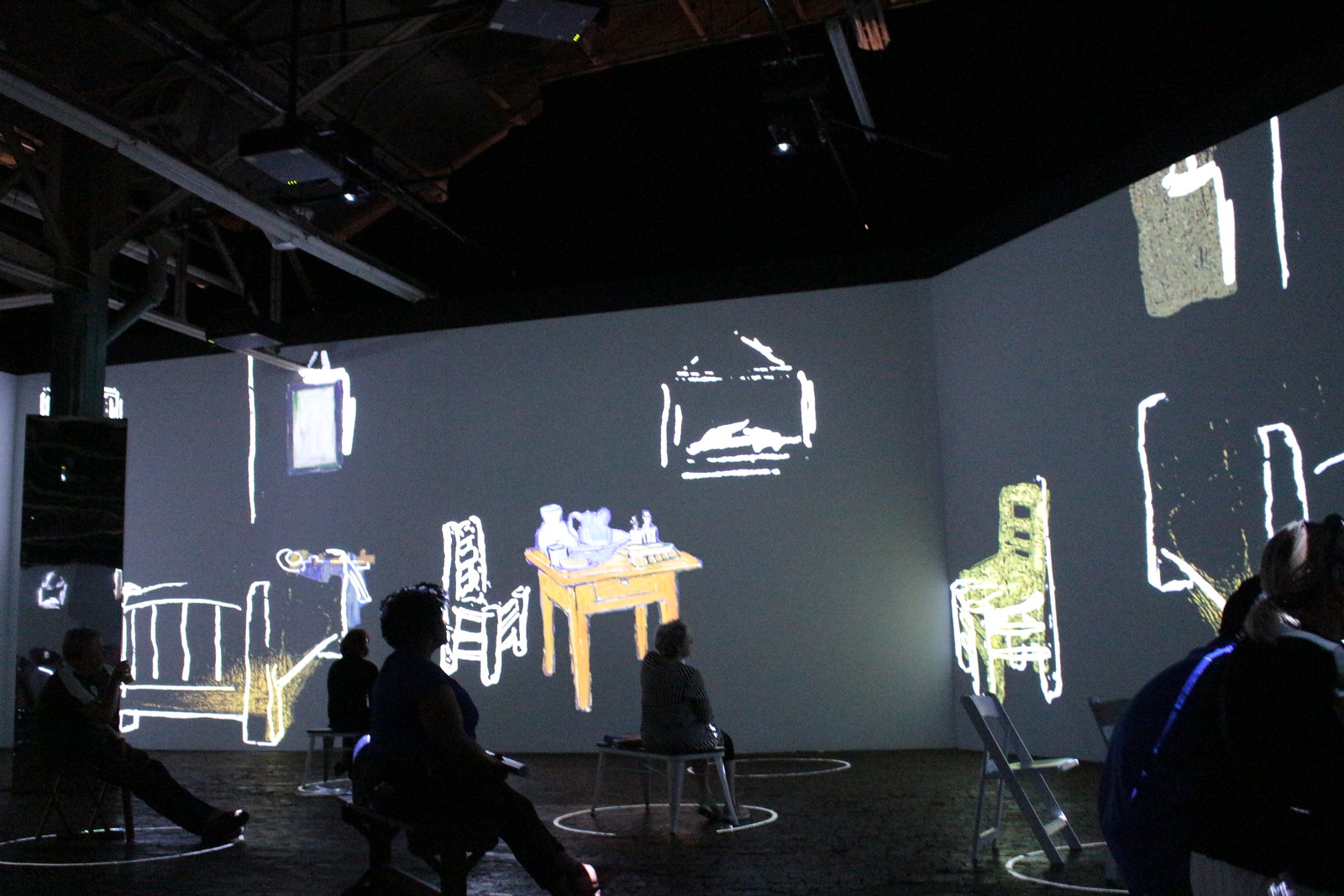 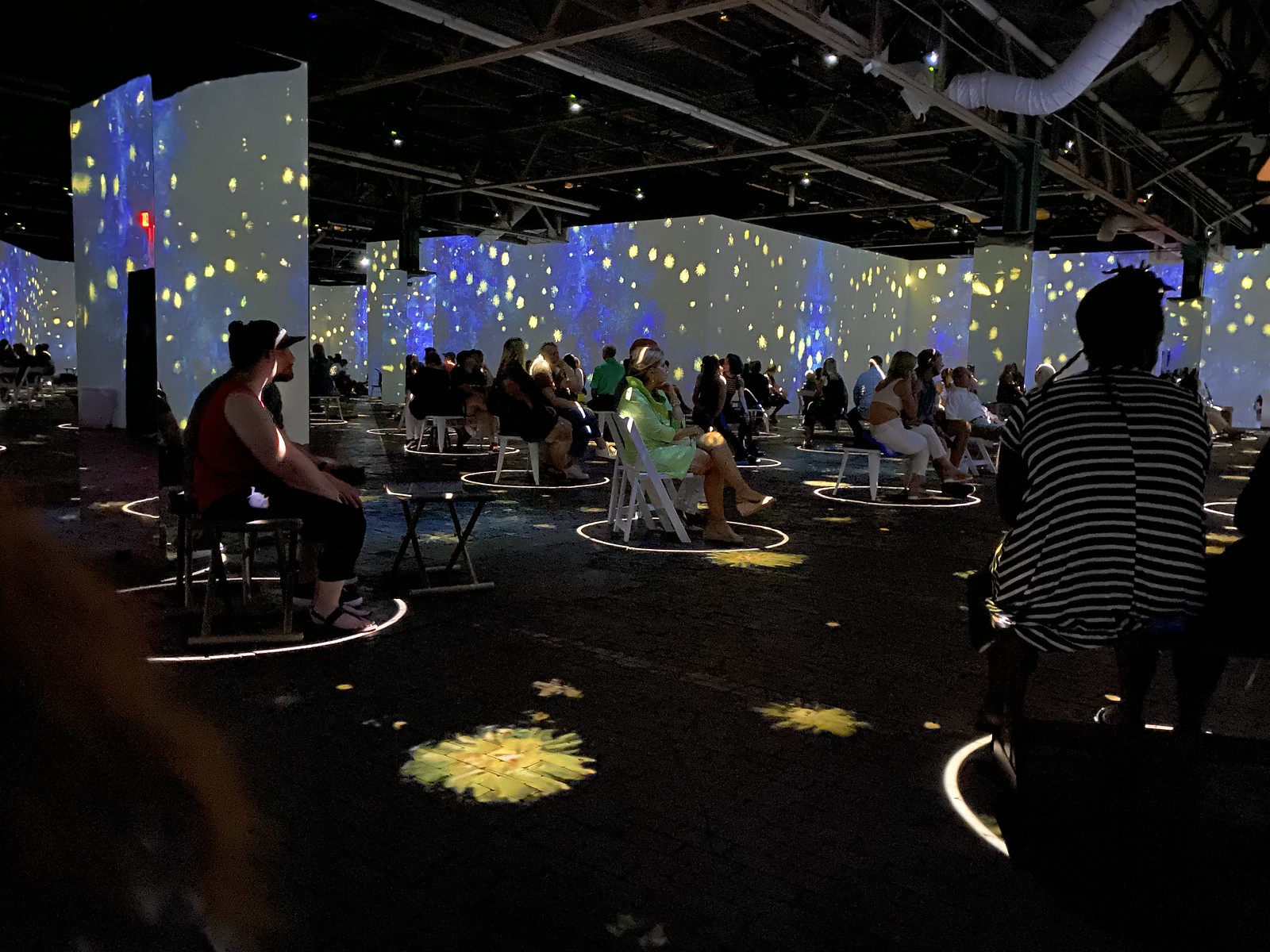 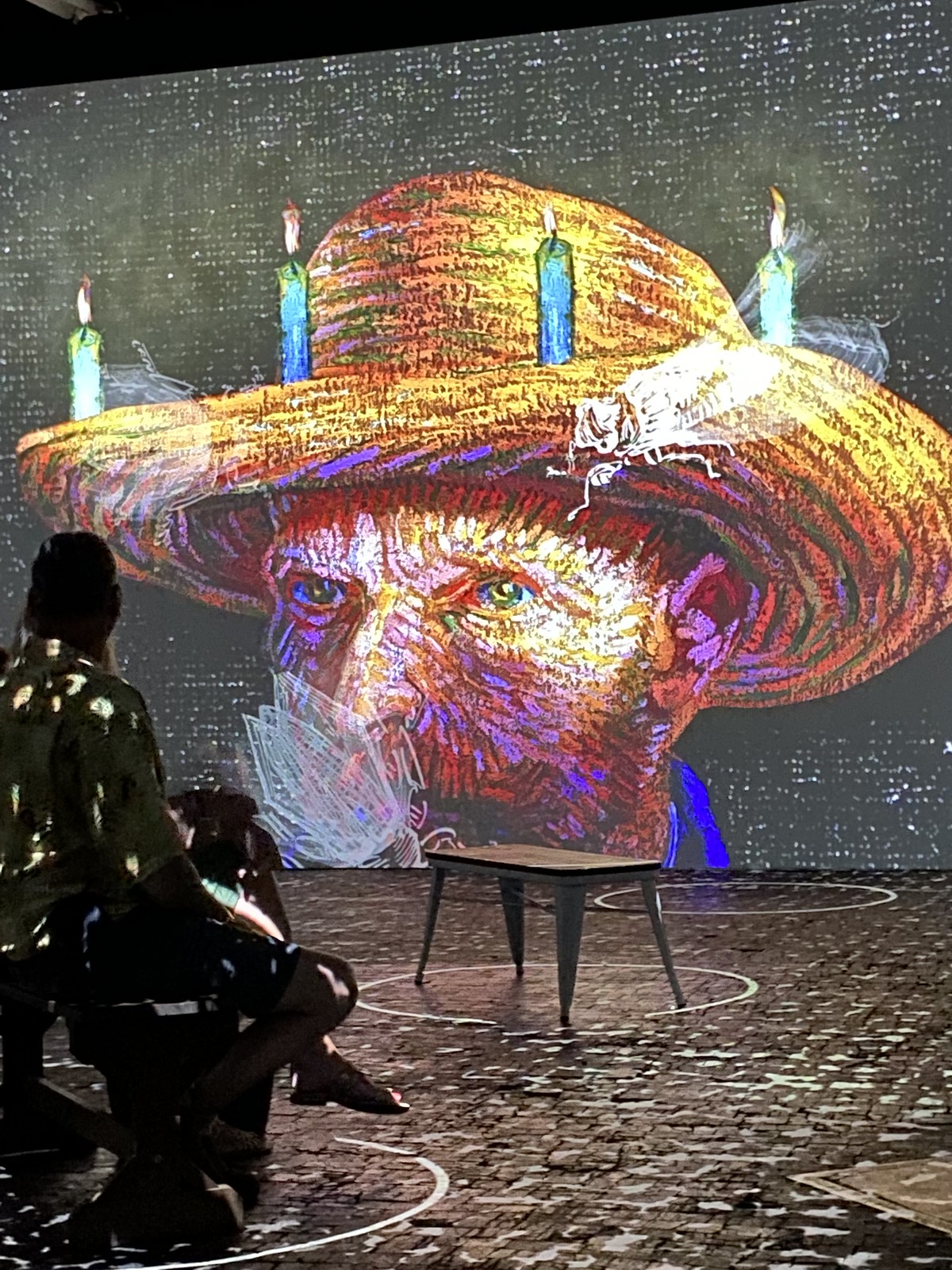 We stayed in an Airbnb uptown that was basically just walls of windows looking out at the skyline. It was SO nice and SO fun to be somewhere totally different than where I usually am. I wish we could have spent more than one night. On the positive side, it’s only a couple of hours from here so we can do it again. 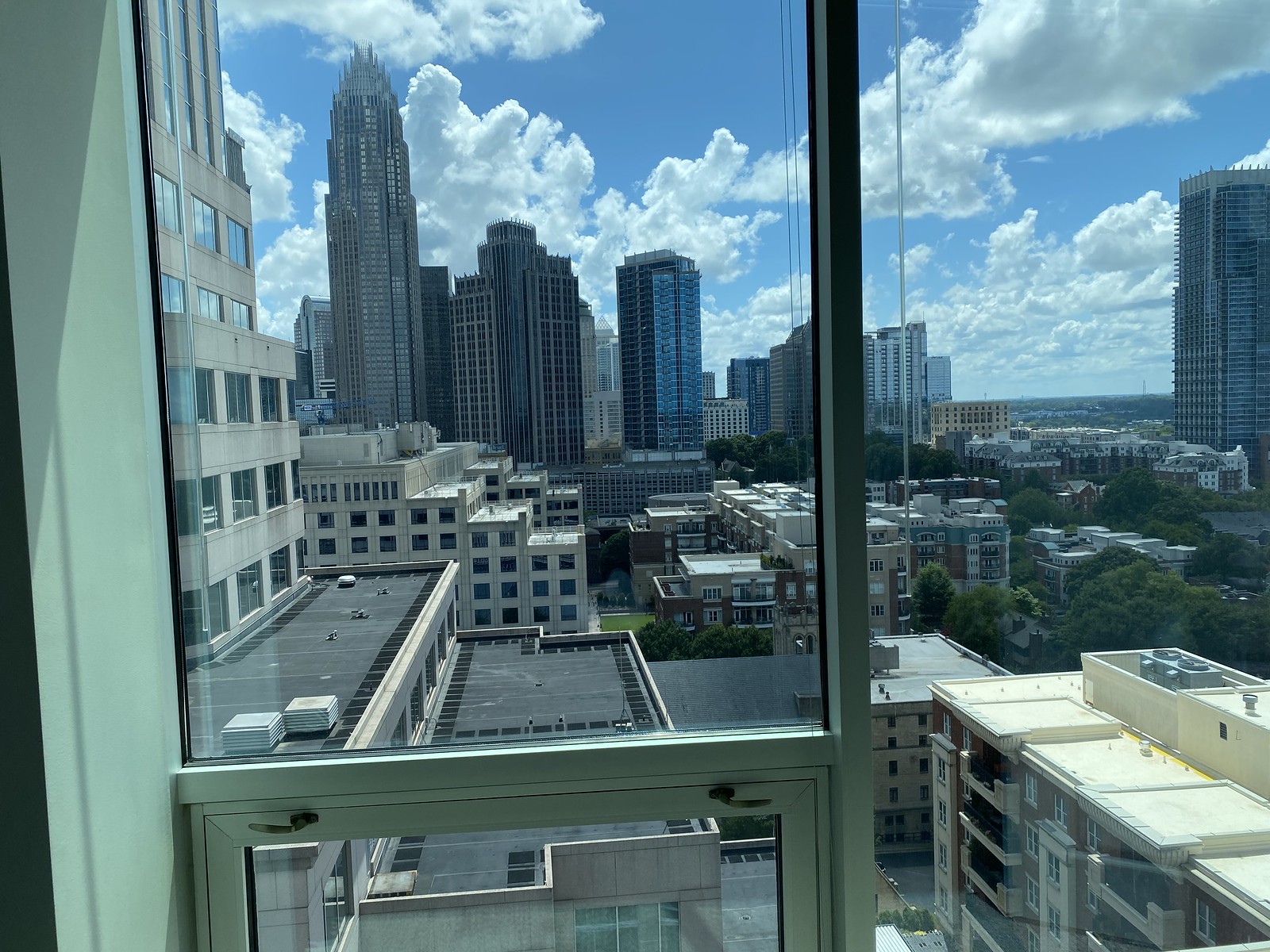 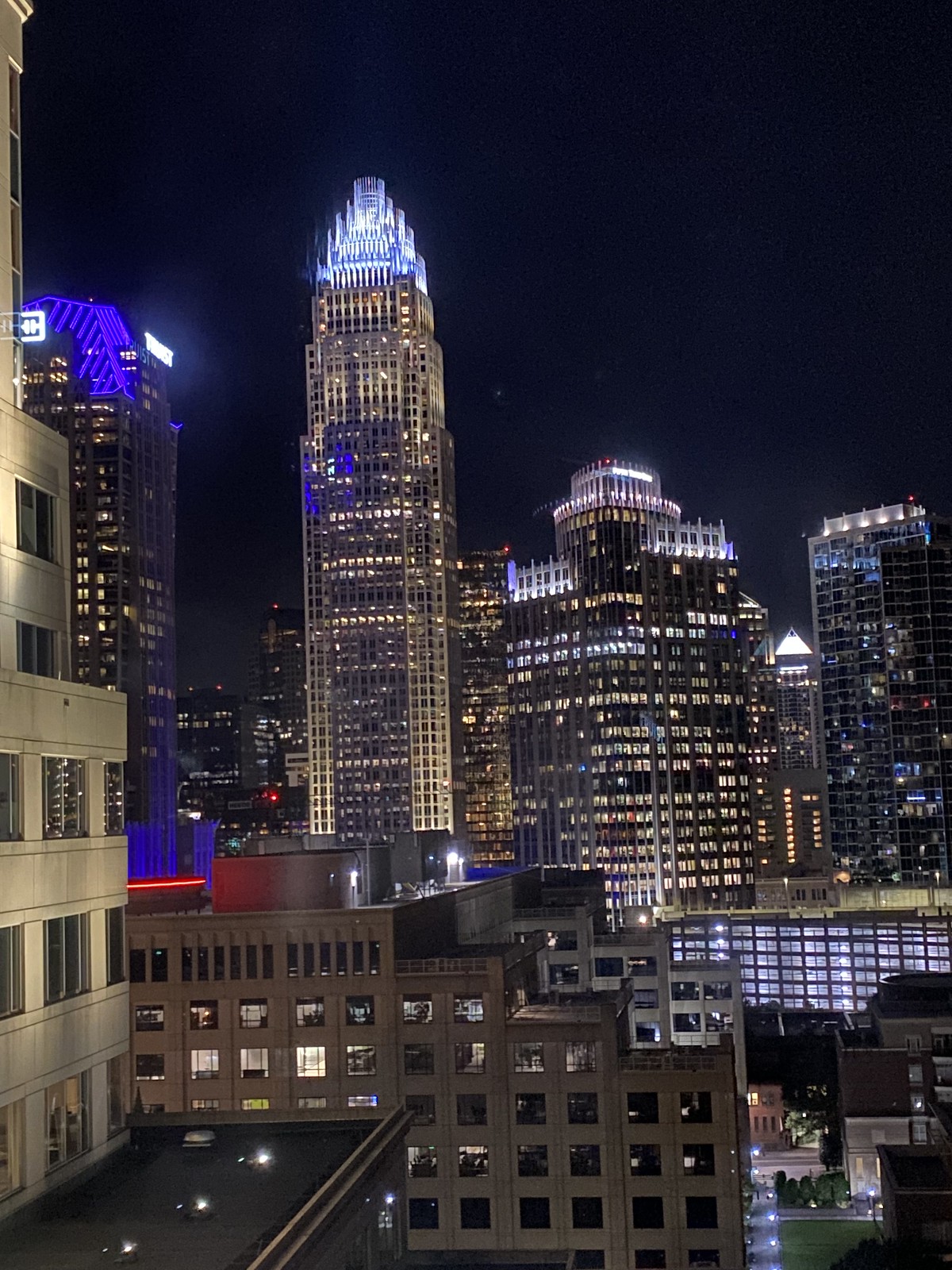 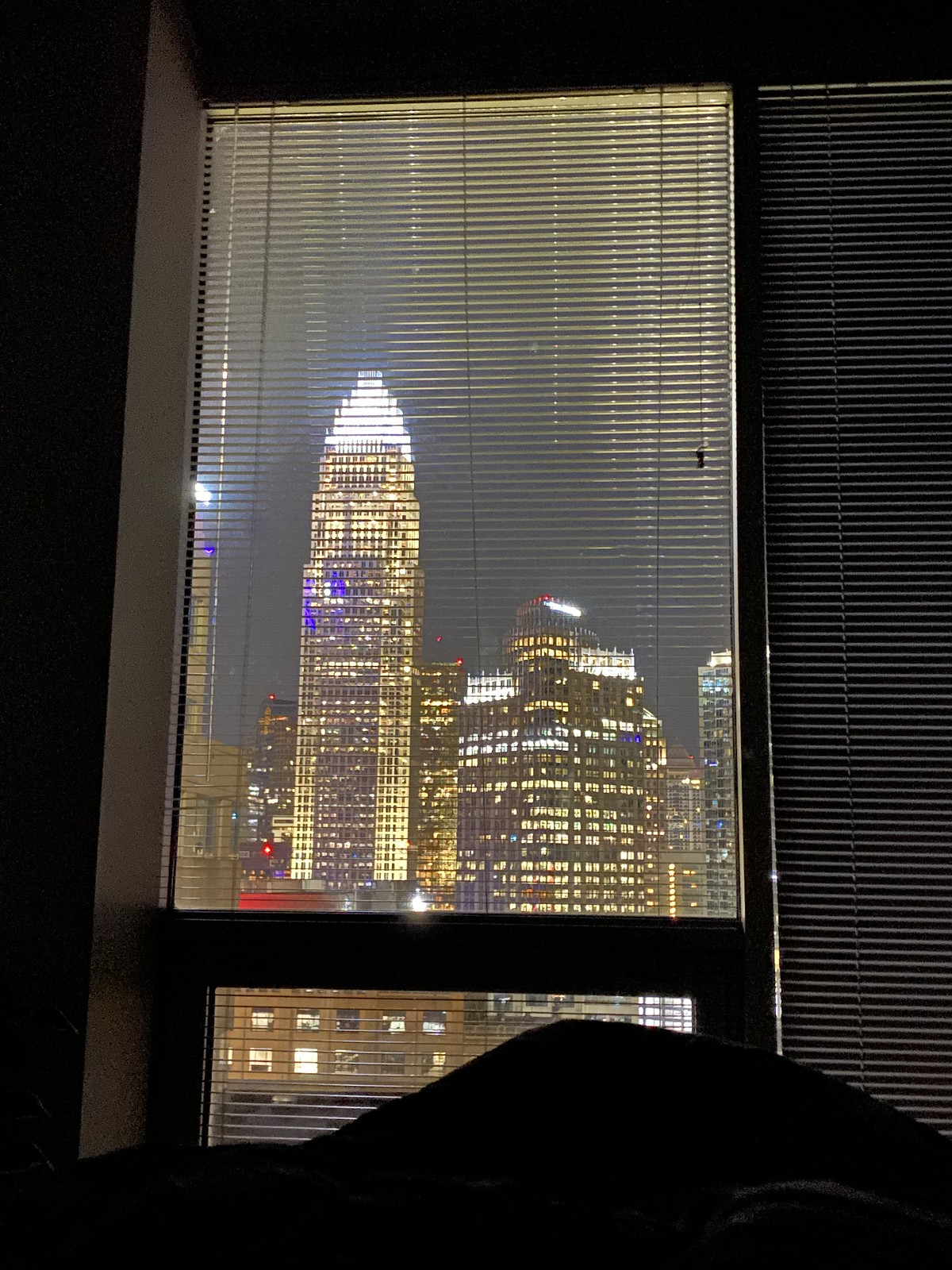 We wandered around uptown quite a bit too. Charlotte is really not a huge city, at least the uptown part isn’t, but it’s got some enormous shiney buildings. 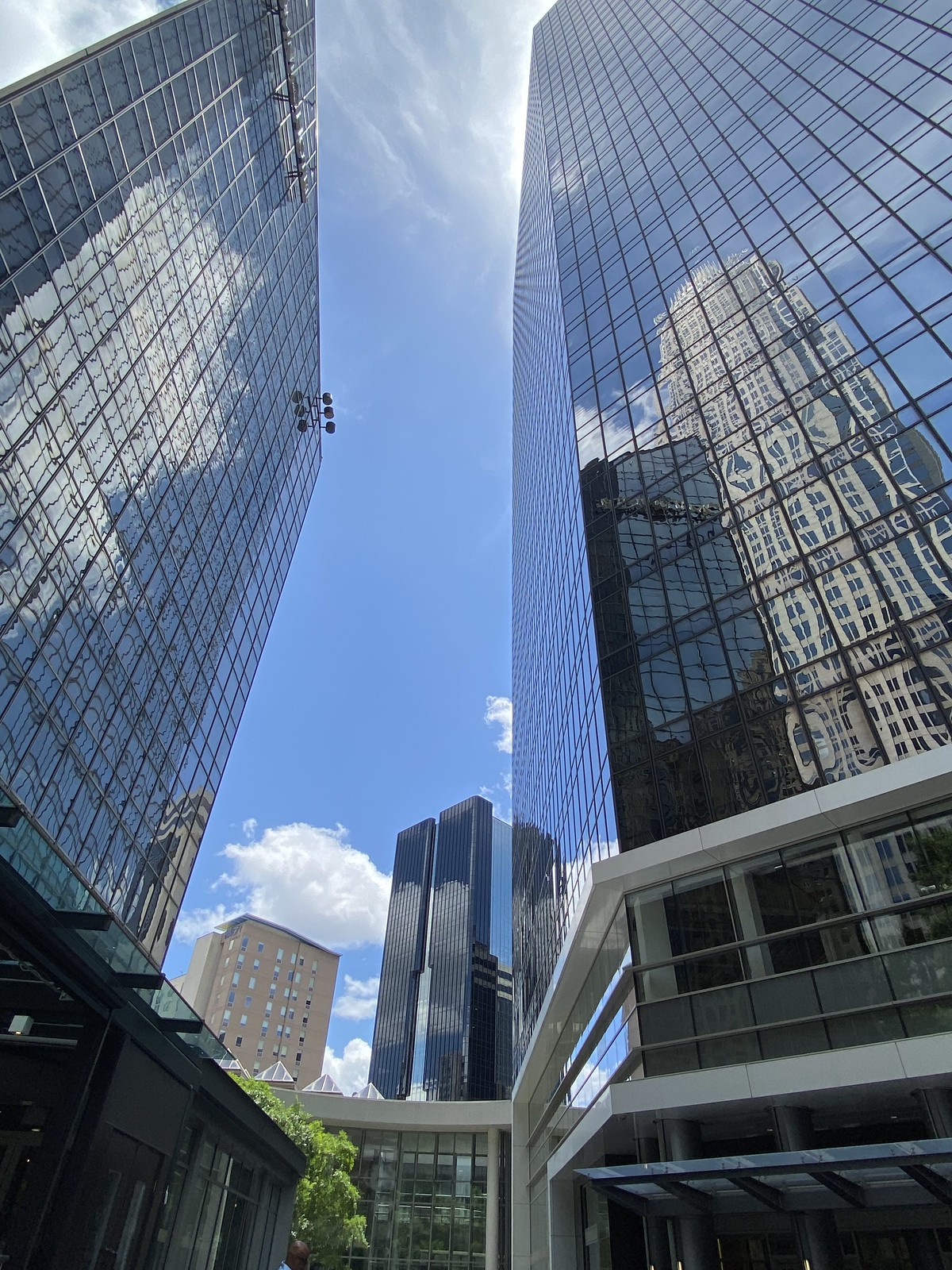 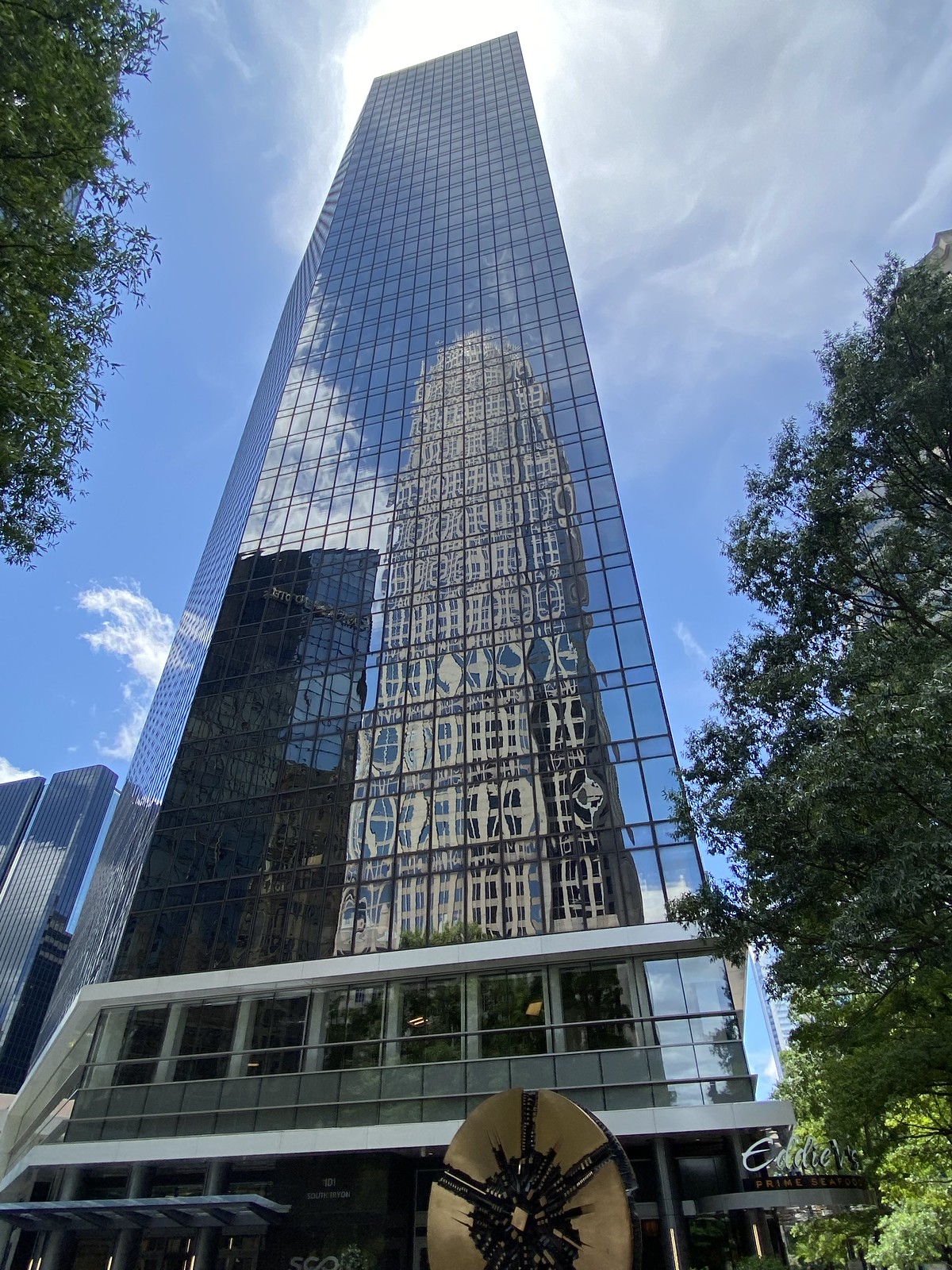 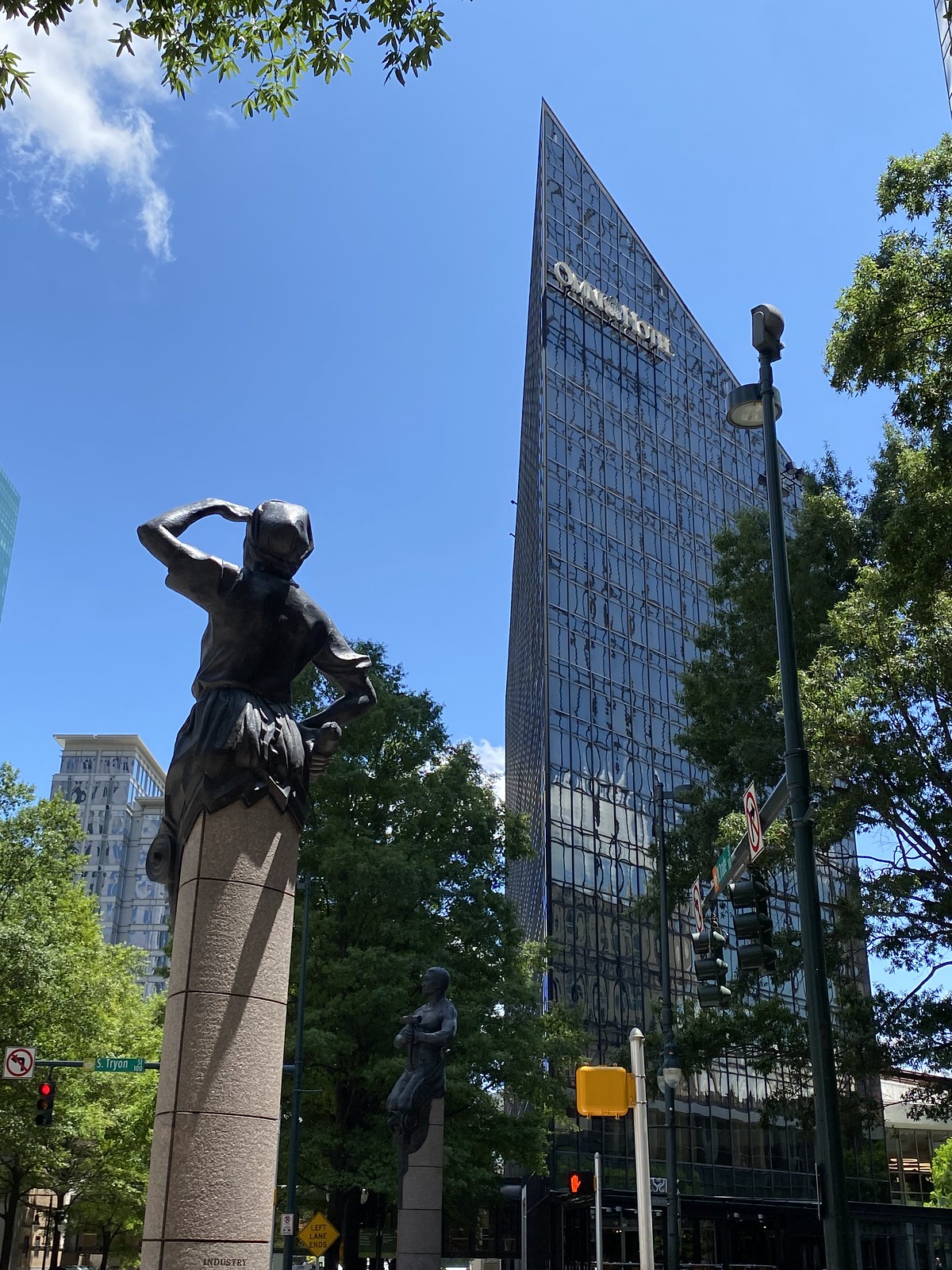 And of course I did not manage to get that posted and am at home now. This has gone on quite long enough. Next time - writing update!

Oh wow that exhibition looks amazing! It reminds me of the Festival of Light one we had here - it had evocative music and was sort of interactive like that too but on a much smaller scale of course! So sorry about the disappointment over your trip - that’s a shame you’re not getting to go now but I can understand Baker B’s reasons.

Yeah, I can too, annoying as it is, lol! We’ve decided to meet in a town that’s midway between us all in December, so I’m much less disappointed now. No flying involved, making Baker B much more agreeable about it.

did people really have to sit in those circles? i love van gogh. have his sunflowers on my living room wall. just a print, it was my husband's mothers. i love it. take care,

They do have the circles there as a social distancing tool - there were also benches and we snagged one of those. We’d started off in a circle in the floor and the bench was WAY more comfortable!

Hey you! I'm over here because ima about to tell Facebook to fuck off and deactivate. Have to keep my main profile though in order to keep Abbott's page... his condition is so rare I hate to take away that resource.

ANYWAY... it feels good to be back here! I'm VERY rusty at this writing thing though. :-)

Mom and I and a couple friends are going to see the immersive Van Gogh in late November, very excited!!

Hi!!!! I would be very sorry if you tell FB to fuck off, but also… BOY I totally understand. I have gotten to the point that I hardly ever do more than skim through it. I keep trying to get back into the actual writing we do here, and LOVE it - also miss it terribly - and keep telling myself that at least what little I’ve done is better than, oh, NOTHING.

You will looooove the VanGogh- there are a couple of different ones, as I found out when looking for the music to the one I went to, but they appear to be basically the exact same thing. I’d love to go again!

I got the VIP, whatever that means! It wasn't that much more.

OH and Abbott totally needs his page - he is such an amazing guy, and it’s SO important to raise awareness/be a resource. Maybe one good thing to be had from FB, at least!

Right? I figured the same... I've had five people contact me via his page about the condition so hey, it's worth it. :-)