My buttocks huuuuurrrrttttt!!! in Hot town, summery in the city - 2017

I think most of you have seen on FB/insta the challenge that I did yesterday. But I thought I would chart it here too.

Back last summer I wanted some kind of challenge to add a little something to a life that had shrunk massively (what an oxymoron!) due to covid. I live relatively near to the western end of the Ridgeway National Trail and I’ve walked on it, cycled on it and run on it loads of times.

The first time i heard of it was when I was a kid and my parents went to hike the Ridgeway while my nana and grandad came to look after us (myself and my siblings). One of my favourite photos of my mum was taken sitting in a field, the yellow flowers up to her chest and she was wearing a bright red shirt. They ended up coming home early because my dad got some nasty blisters.

The Ridgeway is 87 miles long, from a spot outside of Avebury to a hill to the north of London. The hill is called Ivinghoe Beacon. Hiiiistoooryyy time!! There are at least a 1000 beacons around the U.K. which were used for 100s of years as an early warning defence system. So, imagine a couple of dudes on the top of a hill at beacon 1. They’re bored, chatting about Isolde and his crappy shield skills. Then, in the distance, they see someone coming towards the U.K. with nefarious intent.

“Oh bollocks!” yells Theodoric, “Have you got the matches?!” to which his buddy, Arthur, responds, “They haven’t been invented yet you prat, rub those fecking sticks NOW!” At this point Theodoric realises that they have a couple of torches already aflame and they touch these flames to the ready prepared bonfire (or beacon, to use it’s proper term). As the flames poured skywards, lighting the sky with immediate warning, a hillside in the distance also lit up, having seen beacon 1. Beacon 2 warned Anselm and William on the next hill who lit beacon 3. This carried on so that armies around the country were aware of the threat and ready to defend.

The thing about these beacons is that they have to be bloody high up.

And ending a run in a place that is bloody high up is bloody insanity!

Anyway, I digress. I began to run along the Ridgeway which, at our end, the far western end, keeps to the highest parts of the land. It runs through farmland and past various ancient human sites: several Neolithic settlements, an ancient burial mound, the oldest chalk white horse in the country. It goes up and down (and then, always, up again).

The only issue with running this long, winding path was that I had to park the car where I started and I couldn’t rope anyone into helping out because of covid. You see, ideally, I would have gone with someone who would then take the car to my finishing point for an agreed time. That way, by October of last year, I would have run the Ridgeway once.

But, each time I ran, I had to run half the distance that I planned so that I could run back to the car ie. if I had 8 miles planned, i would run 4 miles along the trail and then retrace my steps to the car. 8 miles in total but only 4 miles actually advanced.

So yes, essentially I was running the Ridgeway twice.

In mid November I had worked out that I would be finished, going both ways, by Christmas.

{ominous music begins to fade in…}

But then… lockdown 2 hit with a vengeance. Lockdown 2 blended into {in a booming voice} Stay In Your Area which, once comsumermass was finished, became a very strict third lockdown which lasted until just before chocolategeddon (Easter).

So, it was time to lace up the trail shoes and get back out there.

The further east we went, the more that landscape changed. Halfway(ish) along, the trail hits the Chilterns, a range of hills in southern England. The trail becomes more varied in height, constantly climbing and plummeting, the farmland turns into woodland, often with paths crisscrossing at many junctions, keeping an eye on the little acorns that marked the route could be tricky and I took a fair few wrong turns. Many hasty wees were had amongst undergrowth and behind trees, listening, slightly panicked, for the sound of footfall.

In the first run back I discovered, what I called, That Bastard of a Hill. The following week I found out that it was only the baby. I met its parents. Head on! But I pretty quickly got my trail legs back, I imagine that the strength workouts I’ve been doing really helped too.

Last week I had had a pretty awesome run. I thought I had gone 8 miles, but I had a feeling that the app was wrong on the distance. I measured it in my OS map app and found that I had actually done 10 miles! And when I measured what was left, it said 6.79 miles (that was only one way, remember, I had to do both directions). which meant about a half marathon left. I could do it in two runs… or…. I could do the whole, entire, effing thing in one fell swoop.

And, of the 9 people who voted, 9 of them clicked on “yes”. It was unanimous.

So yesterday, without intentionally training for it (although I had run the miles), I drove to the car park at Ivinghoe Beacon (the end point) and walked to where the path towards the beacon joined the Ridgeway, turned left and started trotting back towards the point I had finished the previous week.

It turned out I wasn’t the only runner out there. There was a marathon and a half marathon too! I passed a few marshals and water stations, chatting away to them as I went.

I reached the point at which I had turned around the previous week and stopped to have a snack and a drink, then began again, back towards the beacon. The final leg of my (almost) year long journey.

At 10.5 miles I was done in. And shortly afterwards I took a wrong turn, feeling bemused by the golf course in front of me. I spoke to a marshal who said I had about ten minutes before the marathoners would be arriving and, boy, did they arrive! They were coming towards me, and I cheered every single one of them, jumping off the trail to give them right of way whenever there wasn’t space. It was an incredible atmosphere! Finally the last runner huffed past, giving me a pained but grateful smile as I told her how well she was doing. The trees had eased off, making way to open countryside which climbed gradually towards the hills that included the beacon. My legs were empty, I had finished my water and was feeling thirsty and I was hungry. I was a few miles over any distance I had done for a few years and the trail was getting steeper and steeper. I had reached a point of stopping every so often for a rest, those so oftens getting closer to one another, each step taking me closer to the end. I reached the top of the hill that I thought was the end only to see the beacon towering above, on the next hill over. Down I went, slowly, slowly down. At the base of the next incline, the steepest yet, was the path that could take me back to the car and, for a fleeting moment, I considered just getting back there. But I couldn’t come this far without finishing. I just couldn’t.

I hauled myself, painfully, up the hill, paths gouged out of the hillside by thousands of people before me. It wasn’t far but on legs that were asking me whyyyyyyyy, it felt like forever.

Finally, I reached the top. In front of me was the concrete post that marked the place that the beacon had been and I ran the last ten paces. I then sat, heavily onto the grass. The very wet grass as it had been raining aaallllll morning. But I didn’t care.

I phoned Rich, using video call, so he could be a part of it, then I hauled my damp arse off the grass and dragged myself the 500 metres back to the car. And my thermoses of porridge and coffee. 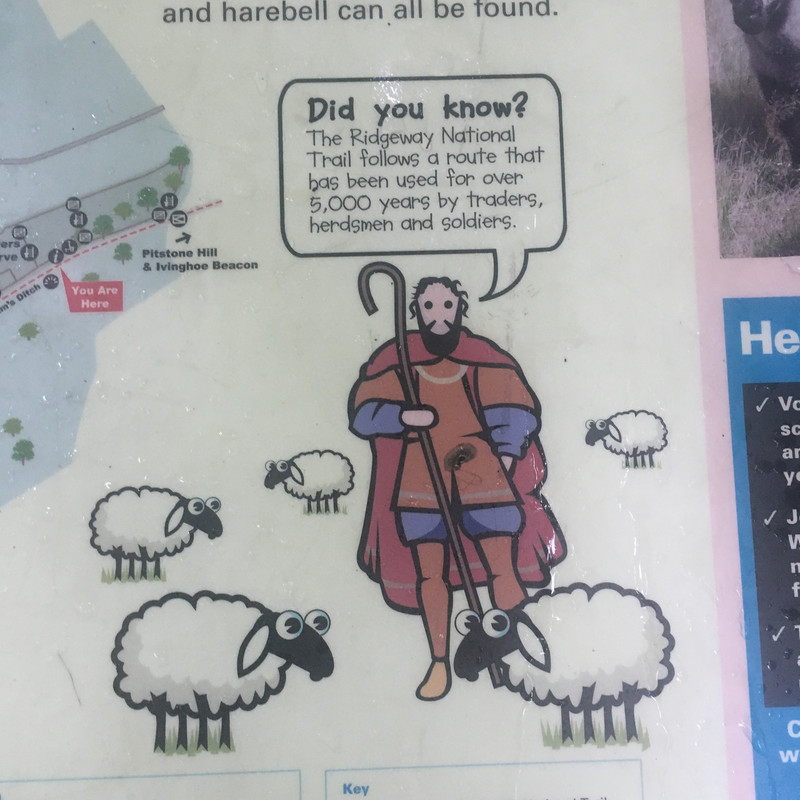 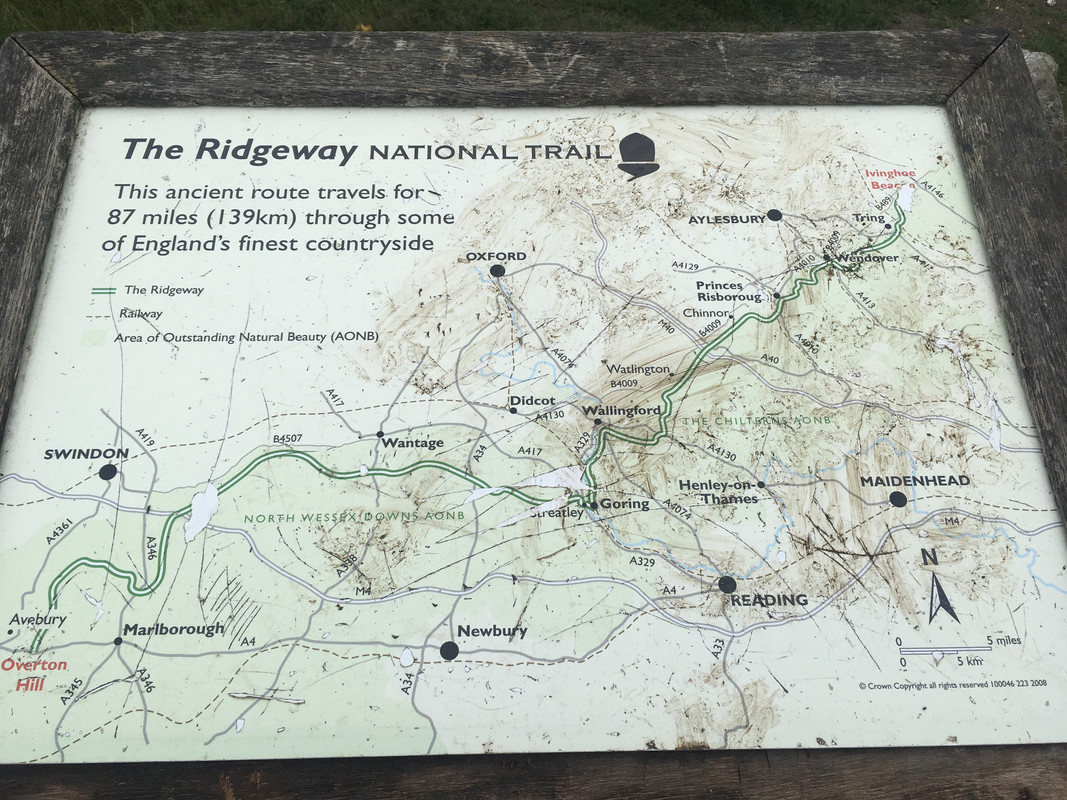 The route i took on Sunday (you can see where the golf course was, where I had taken a wrong turn, by the sticking out bit of red). 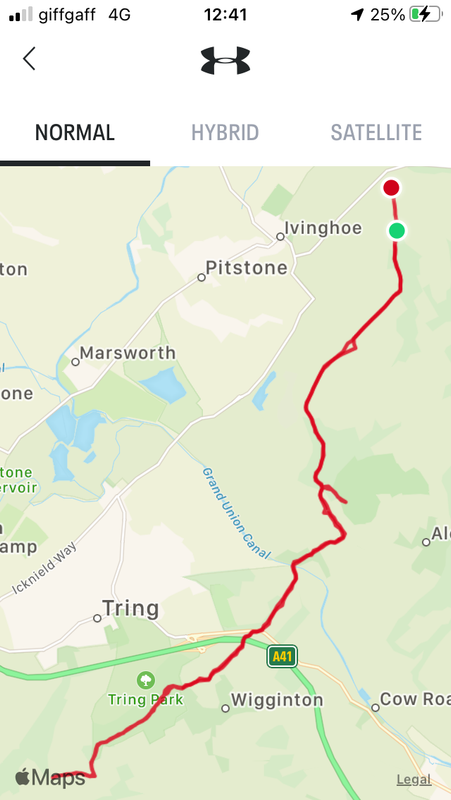 These particular Woods are well known for their views. Maybe I’ll see them one day 🤣🤣 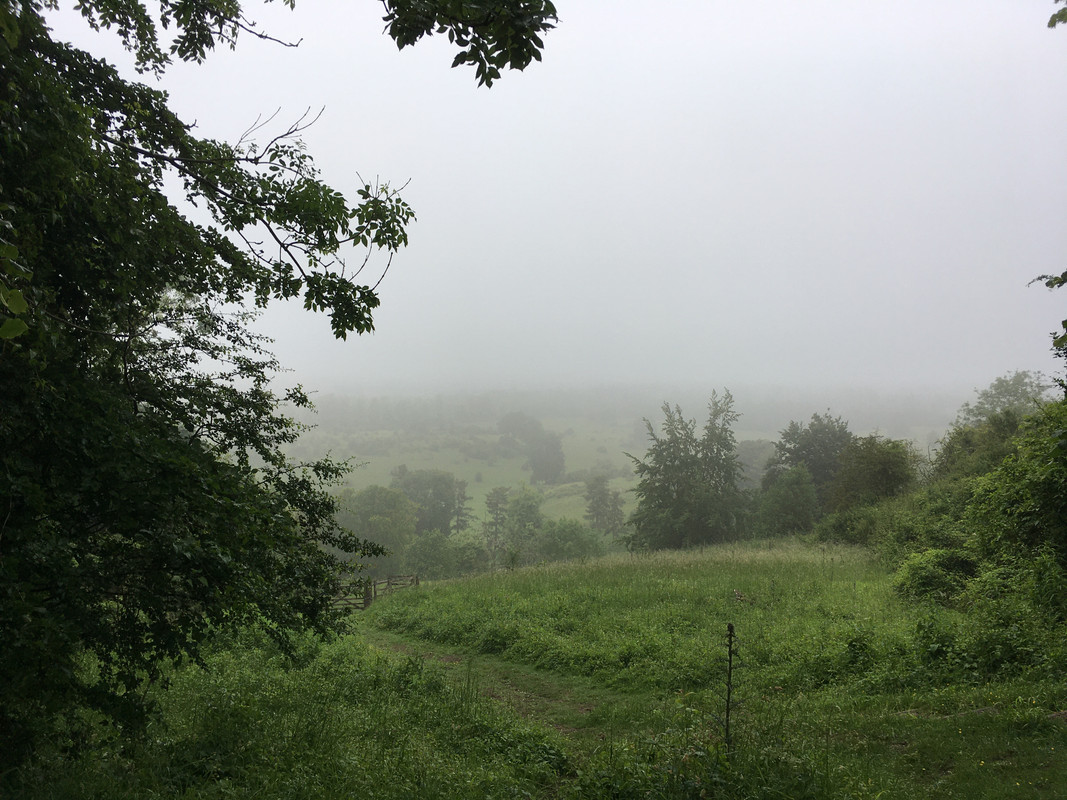 There mist through the trees. 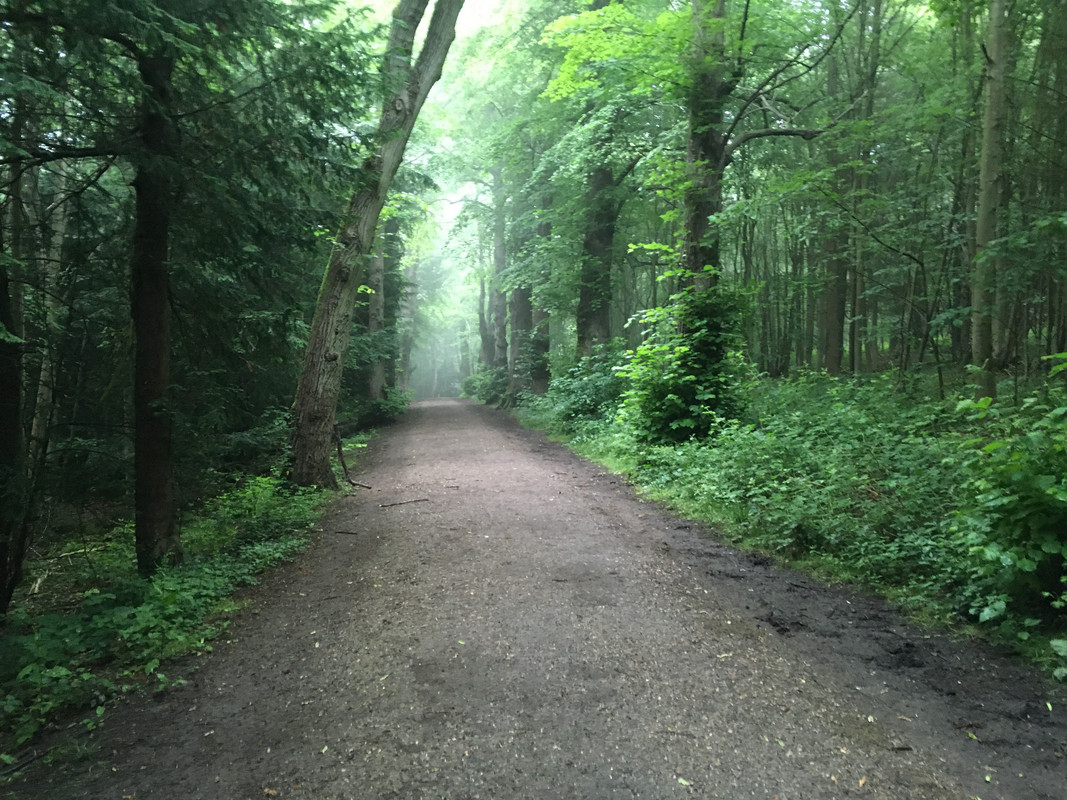 Congrats again, and you are awesome and inspiring!!!

Wow at those last two pictures! Thanks much for sharing that.