HOW TO WRITE A SHORT STORY SESSION 2

This is the second session of eight in our online creative writing course, in which we’ll be exploring how to write a short story. Now that your creative juices have been stirred, you should be ready to start writing; if not, go back and try some of the exercises in the first session of this course, releasing your creativity.

Most new prose writers have the beginnings of at least one novel in their drawer. They will get to chapter three or four and give up because they don’t have the skill, confidence or stamina to carry on. If you’d never run a marathon you would be a fool to enter the Great North Run without first attempting some shorter distances. Short stories are the best place for new writers to hone their craft. But don’t be fooled, they’re not necessarily the easiest option. It takes a great deal of skill to write a short story that’s effective – you will have to curtail any tendency to ramble on. And not all writers need to be novelists either. I believe F. Scott Fitzgerald was quite comfortable as a short story writer and only produced the occasional novel out of pressure from his publisher, while the great Raymond Carver never wrote a novel in his life.

Short stories are an endangered species

There was once a time when every magazine carried some short fiction. Sadly, that time has passed. Now, apart from some weekly women’s magazines in the UK, short stories have retreated between the dusty covers of literary publications. The situation has become so bad that a group of leading writers and publishers got together to start the Save the Short Story Campaign and are beginning to make good progress.

Short stories appear to be doing far better across the pond in America where the art form is more respected and accessible to ‘ordinary’ readers. However, there are signs that this may not continue. Read Stephen King’s thoughts on the decline of the American short story. You can check out Writer’s Market for a list of North American short story outlets.

How long is a short story?

So what is a short story? Short stories can be anything from 500 to 6000 words. Anything under 500 words tends to be labelled ‘flash fiction’ or ‘micro fiction’ (although some would argue it’s still a short story) and anything over 6000 is moving into novelette or novella territory. I would argue that a short story is something that can be read comfortably in one sitting and doesn’t leave you starving or bloated. Popular magazines tend to accept work of between 1000 – 2000 words, more literary ones go for longer. Children’s short stories tend to be under a thousand words. If you would like to write for younger readers, check out some of my articles on writing for children.

A short story is a slice of life

A short story is a slice of life. As such, you should narrow the time frame and geographical location of the piece. One plot, two or three characters and no more than two locations (one would be better) should fit into a short story. If this is too tight a fit perhaps you should be writing a novella or a novel. 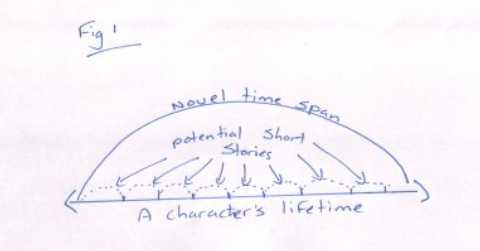 How to begin a short story

Start your piece as close to the turning point or climax of the story as possible. Most writers take a paragraph or so to find their feet. On a second reading they will delete the first paragraph as unnecessary exposition or padding. Your first sentence is crucial; it should be filled with energy, intrigue and forward momentum. The reader should be stopped in their tracks and not be able to turn away until they’ve read the whole thing. The first sentence should raise questions that need to be answered. Take for example these openers:

‘My mother was making me a dress.’ (From ‘Red Dress – 1946′, Dance of the Happy Shades)
‘General Sash was a hundred and four years old. ‘ (From ‘A Late Encounter With the Enemy’, The Complete Stories)
‘Fact is the car needs to be sold in a hurry, and Leo sends Toni out to do it.’ (From ‘Are These Actual Miles’, The Oxford Book of American Short Stories)

Exercise 4: Jot down questions that arise from these openings and what, if anything, makes you want to read on. If you can get hold of copies of the stories do so. Ask yourself: were the questions answered? Was I satisfied with the answers? Was the answer what I expected?

Exercise 5: Use a trigger image, phrase or thought (see Releasing Your Creativity) then write down a leading, opening sentence. What questions might be raised? How might you answer those questions in a short story? What setting would be most appropriate to answer the questions? How long will it take for the question to be answered? Can you think of any characters that might help you tell the story and answer the question? (We will be looking at building a character in a future session and try writing another story from their perspective). Look over your answers and see whether or not the outline of a short story is emerging. If not, try another sentence or another trigger image.

Every short story should have an opening that is developed in the middle to build tension which reaches its climax towards the end, after which there is a rapid conclusion. For those of you who have studied any dramatic or literary theory you will recognise this progression as typical Aristotlean Three Act Structure. In a short story you should not spend too much time in the ‘first act’ where development, setting and exposition take place, and should start your narrative as close to the inciting incident (aka point of change, first turning point or initial crisis) as possible. The inciting incident is the event which upsets the apple cart of the characters’ ordinary world and compels them to act in a certain way in order to bring balance or closure to their disrupted environment. In the Red Dress it is the school dance which the narrator fears will bring humiliation. She then tries to fake illness in order to get out of it, then, when this fails, tries to remain as invisible as possible at the dance. We will look at how a character acts to bring or avoid change change in a future discussion.

Exercise 6: What is the ‘ordinary world’ of your opening sentence? Remember, this may be an abnormal world to most readers, but it should reflect the status quo of your characters before it is challeged or shaken up. What challenges this status quo? This is your inciting incident. Using only three paragraphs (50 – 60 words each) or less, start writing your short story. In this short space you should establish your ordinary world, your main character and the inciting incident of your story.

Obstacles, setbacks, climax and resolution
This is the outline of the rest of your story. Imagine a graph of building tension. 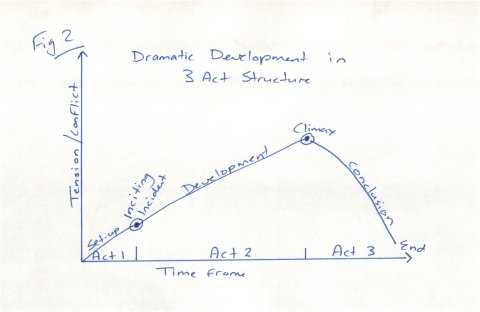 Your story should follow that arc by allowing your character to face obstacles, setbacks and minor victories on the way towards reaching the dramatic climax and bringing resolution.

Exercise 7: If you are graphically minded draw yourself a rough graph or jot down the beginning, middle and end of your story. Now write the story and fill in the gaps. If you’re not so graphically minded, just jot down a few key phrases or events that might carry your story forward to a possible conclusion. Don’t worry, this isn’t cast in stone, and you can change the beginning, middle, end and anything in between at any time. Many writers just write to find their voice. That’s fine. Once you have a first draft, go back and see if it has some kind of structure or arc. If not, you may have to tweak it a little.

I hope this has given you some insight on how to write a short story. Happy writing!