i got up at 9am like usual to give mom her pills and breakfast. Then i took her in the bathroom so she can wash up. Afterwards i had to do the wash and i took a shower too. Then i had to clean the tub… my back is obviously bothering me from the bending. But i just had to get it done. Then i felt dead because of my back. i had to put the wash up and take the dry stuff down. All this by 1030am. i took sandy out too and fed her. i did all that even before my coffee. But i knew if i sat down and started to relax my back would get worse and the tiredness would set in FAST! So i waited till i was done with all that i could finally crash.

This coffee is so good!! And i needed those cadbury eggs!!! They hit the spot!

Yesterday i got my bluetooth earphones!! Boy they came on the right day! Yesterday i took my mom to her hematologist. We waited 2 hrs to see the doctor. Thats very unusual for that place. They were so swamped! My mom had to go to the bathroom an hr and a 1/2 waiting in exam room. So i told an intern i was taking my mom to the bathroom and if doc comes in tell him we didn’t leave. We weren’t in the bathroom that long. When we came back the intern said the doctor came to see us! He went to see someone else then… more waiting. My mom even said before we went to the bathroom: “Watch, we wont be here and he’ll come” .. i’m thinking nah We waited for so long and he wasn’t anywhere in sight! lol! Momma’s always right :)

Well, they’re watching her platelet count because its been dropping and they’re worried about her spleen. In the past it hasn’t gone too low. But yesterday the count was like 57.. thats low and the lowest its ever been there. Doc thinks its related to her psoriasis, the methotrexate shes on for her psoriasis, and her immune system. Another doctor recently tried to lower her methotrexate so the blood count would go up… count was like in the 90s then. But in dropping the methotrexate from 6 pills on thursdays, to 4 pills on thursday is a huge difference. The 6 pills were keeping her psoriasis at bay. When she dropped her down to 4, after 2 weeks psoriasis started popping out on her again. i called her and she said she wanted to try to alternate the pills.. 5 one week, 4 the other..etc. Well after a few weeks of that she was getting more psoriasis and they weren’t going away. Pretty much making my mom a guinea pig! i know she was just trying to help. But i knew by dropping her pills her psoriasis would come back and she doesn’t need that now! My mom has a cronic case when she flairs up. its all over her when it gets bad! God my poor mom!

Im glad she doesn’t have much on her and they’re really small and dont bother her. That doctor finally put her up to 5 a week. She’s not getting anymore, but those little ones aren’t going away yet. That will take time though.

She has to go back to hematologist may 5th to test her blood again. They watching her closer now. He told us what to look for if it drops too low… buising or bleeding where there shouldn’t be, or red dots on the legs.

If by the 5th of next month it doesnt go up or goes lower they gonna start her with steroids first. if that doesnt work they do an iv bag. First treatment is an iv once a day for 4 days at the office. Then once a month. i’m hoping it doesn’t go that far though and her numbers go up now shes on a steady 5 pills of methotrexates a week and psoriasis calm down. He mentioned what could be happening is the immune system is fighting the psoriasis thats why its dropping.

Well when i got home i was so glad to see that package from amazon!! i couldn’t wait to try them out. i knew it would be some hrs before i did, i still had to give joan her car back and eat something. Plus i had to charge them. They really boosted my mood!! Those and the “tacos” i made before i gave joan her car back. i say tacos like that because it wasn’t traditional tacos. i had to go to the store after the doc before we got home to get something for my mom and get Lloyds bbq tubs i forgot the other day. They were on sale buy 1 get one free and i couldn’t pass that up. the tubs even had $1 off coupons on them so i saved more! i got 2 shredded beefs and 2 shredded chickens. 1 of each went in the freezer. i kept a beef and chicken in the refrigerator. i had some bbq shredded beef in a flour tortilla with cheese and boy was that heavenly!!!
Ground beef i have in refrigerator im using to make hamburgers.

Anyway, i was supposed to charge the earphones a full 4 hrs at 1st charge even if the blue light came on meaning it was done. But i didn’t read that till after i used them on a 3hr charge. i was so happy with them!!! i paired them to one of my tablets and listened to either technobase.fm or trancebase.fm .. going back and forth between the two stations from 8:30pm to i think midnight. They work great! i even walked to the kitchen and took mom to the bathroom and they were always connected. i know i dont have a big house(i live in a mobile home and its over 60 feet long).. but i know bluetooth ranges can be iffy even if the devices are a few feet away. i forget the range of the headset. But if i can go from one end of the house to the other and it doesn’t disconnect, i’m a very happy woman :D .. after hearing that news from the doc i needed music to relax me. My mom was fine about the news. At first when she heard she said to the doc that shes old. He said age has nothing to do with it. He even has a 20yr old going through the same experience. And at night my mom was calm(well after i gave her an anxiety med) and watching the jeffersons.

i’m only going to use the earphones at night or later in the day when i’m in the livingroom across from my mom so i can watch her even with my headset on.

Wow i wrote a lot this morning! its almost noon. I’ll probably make a few tacos for myself soon.

Below are my new bluetooth earphones! 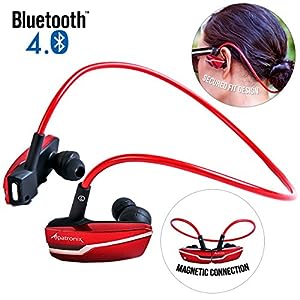