The $37k house, continued. More pictures: in The Big, Blue House, year one.


Continuing from where I left off:

The original listing, to illustrate what makes this place so special: 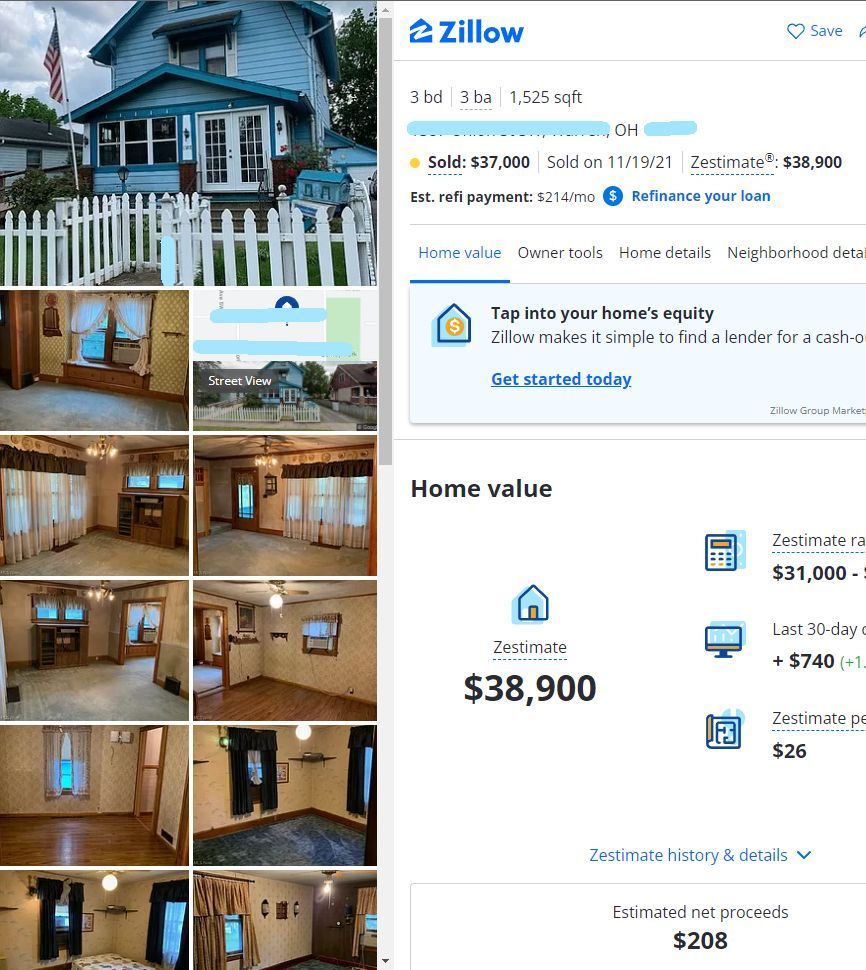 Why they sold it so cheap continues to be a mystery to me.

It might legitimately be haunted, in that doors like to open, and one of the old doorbells rings every few days or so, (usually between midnight at 6 a.m.), even though the button is in the basement, and the floors do creak when we’re both in the dining room; and there are weird shadows, but there are also lots of corners and light sources, and it’s all perfectly explainable.

And even if it were haunted, it would be the ghosts of the previous owners who both died here, (of natural causes), and it was their eldest son who sold it. So surely their own children wouldn’t be afraid of their deceased parents.

And this is an economically depressed area, but crummier houses, (many, many much crummier houses), have sold in this little-ish town for $50-$65k. So why they listed it for $35k, and immediately accepted our offer for $37k, is just confounding to me.

They must’ve been in a hurry to unload it. But why?

The previous owners had 6 kids. Maybe they specified in their wills that the house was to be sold and the money divided equally. So then why not get as much as possible for it?

I’m stumped. Was the house a point of sibling animosity? Did they sell it cheap and fast to get over the squabbling? I have no idea.

The ‘master’ bedroom, before we got here: 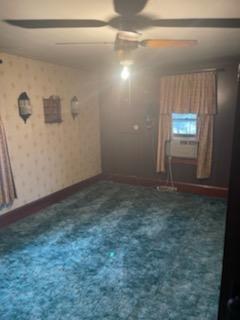 The curtain rods in the master bedroom. Yes, the room smelled very, very musty. But I love the history of it. I love that it’s full of stories, and not just some former rental with institution-gray paint. 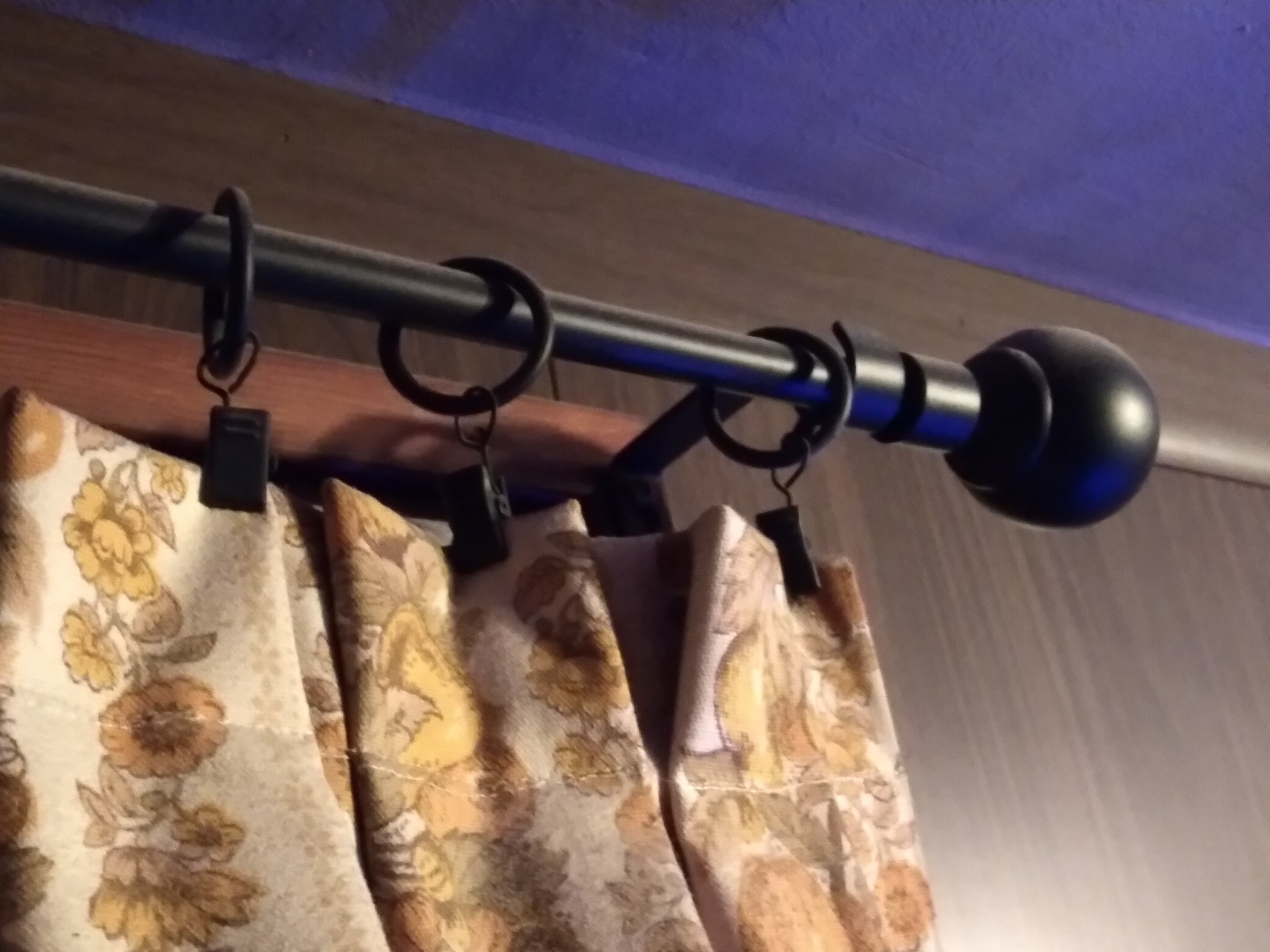 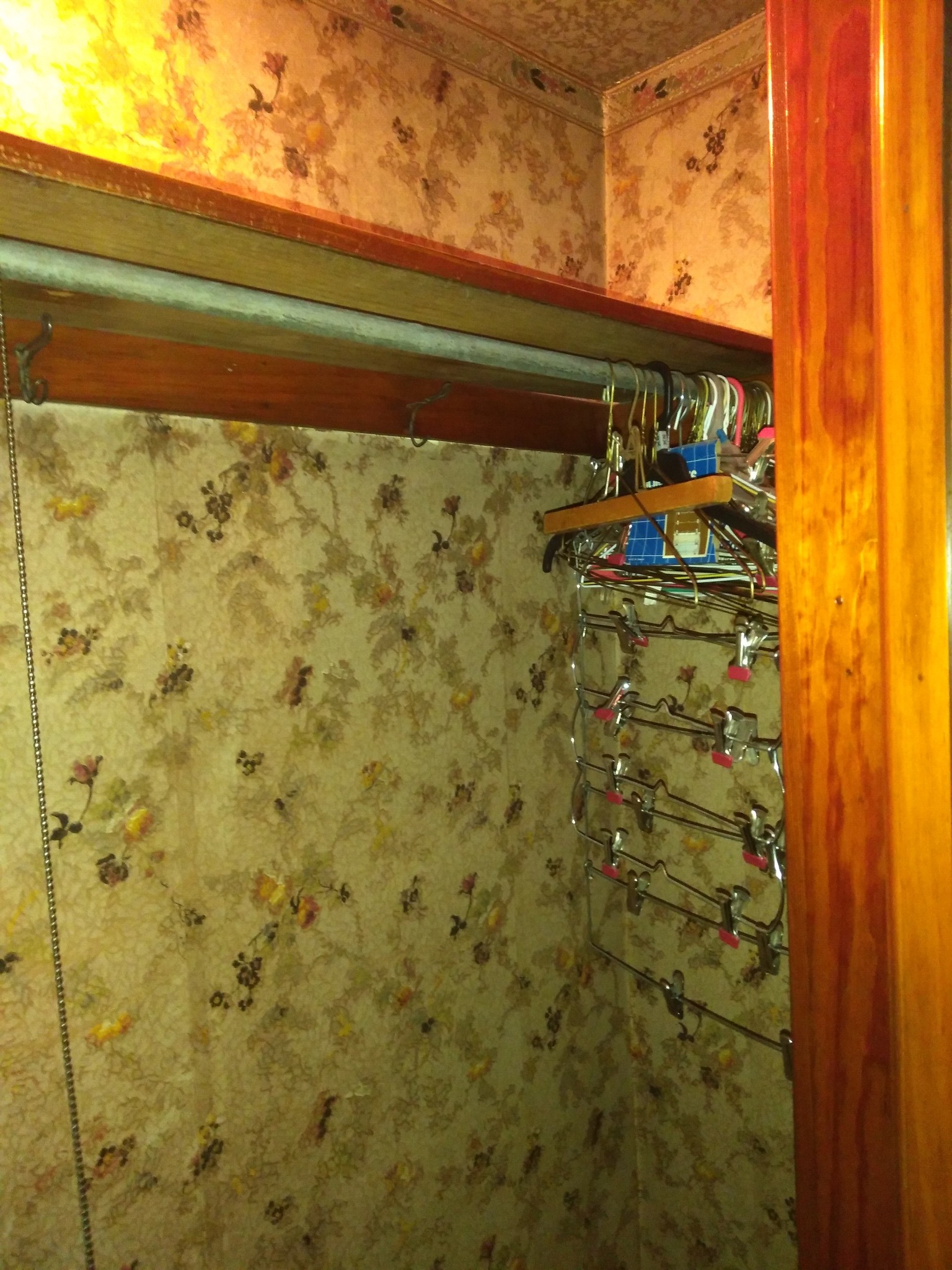 The right hand master bedroom closet. The whole thing is cedar, presumably to prevent moths from eating the clothes back in 1925. It’s a super neat little space. 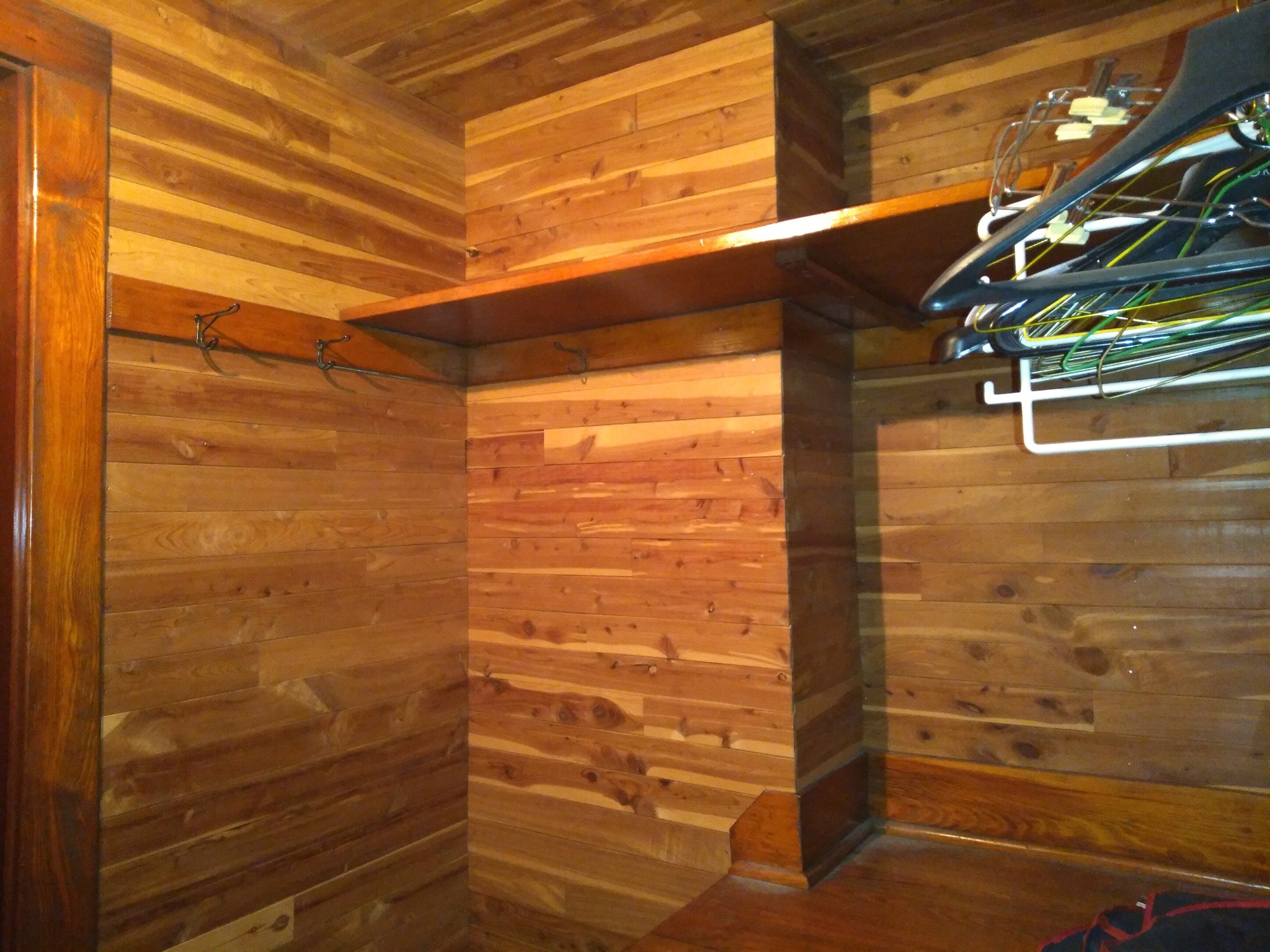 The upstairs bathroom, before we got here: 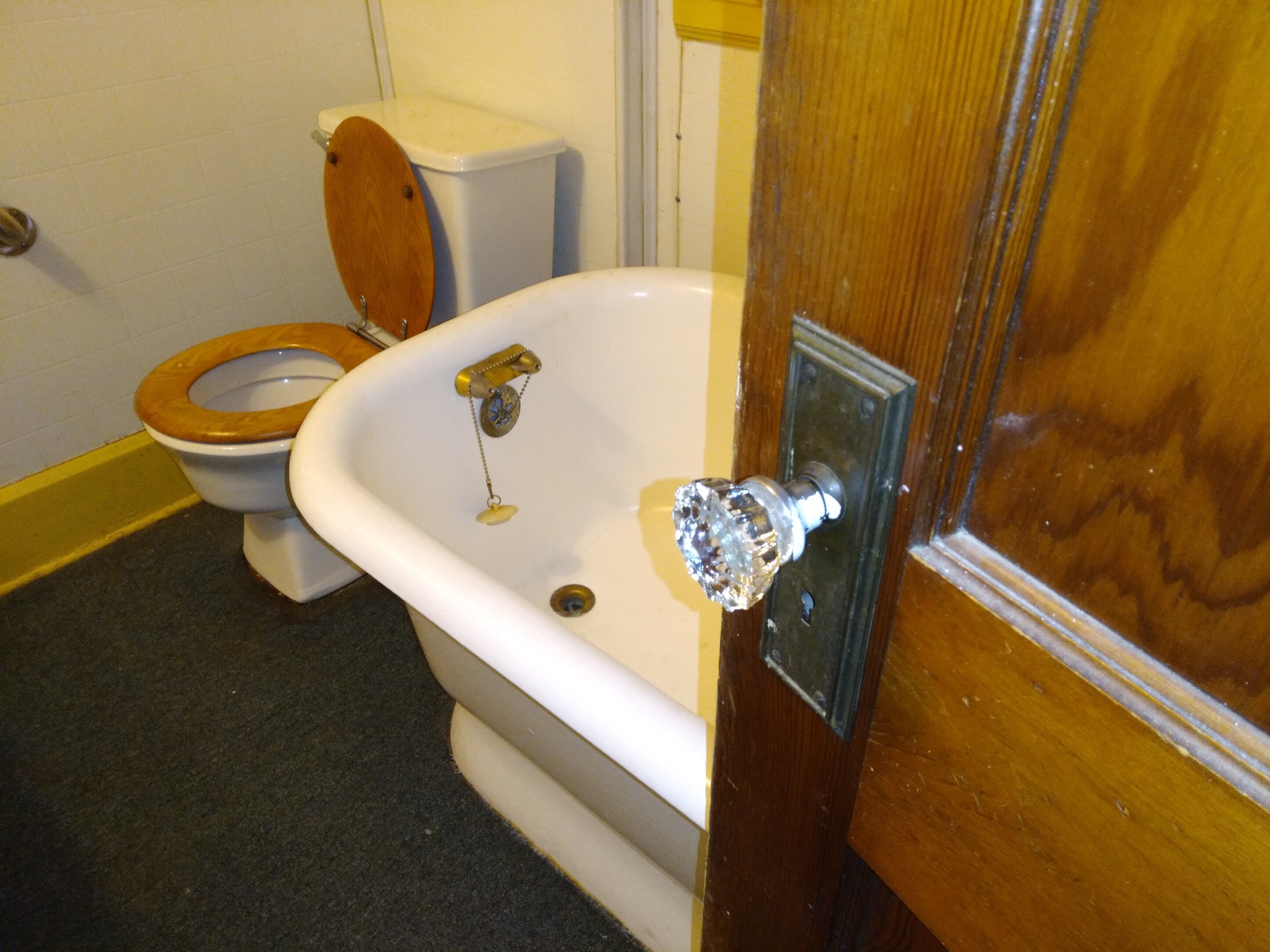 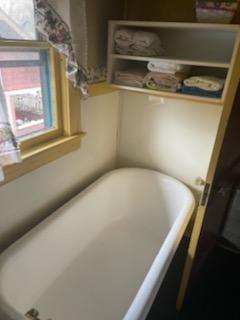 The bathroom door. That “key” is a permanent part of the latch, to lock it from the inside. 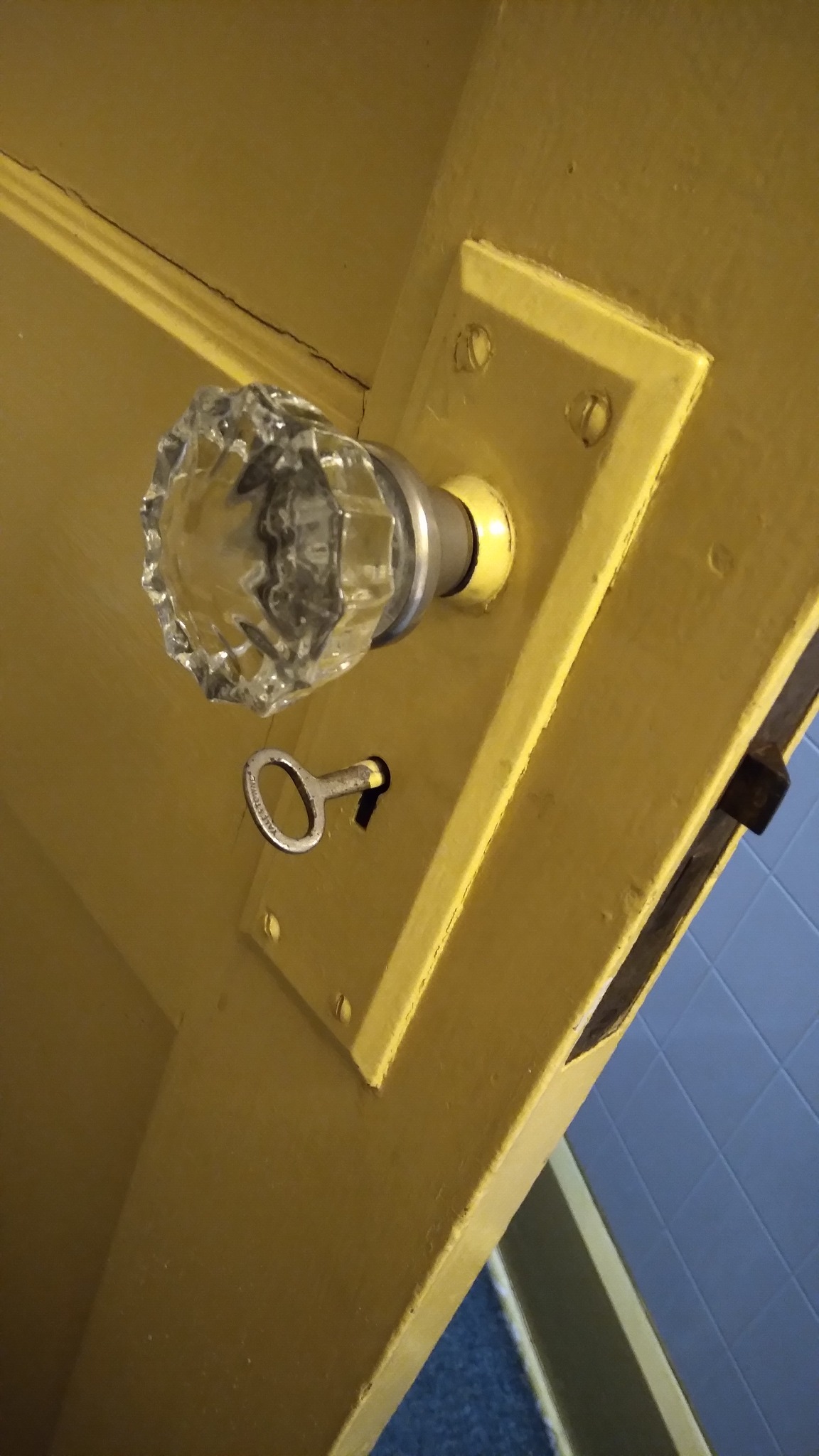 The smaller upstairs bedroom, where I’m working on my paintings. It also has a nifty closet, of which I alas have no pictures. 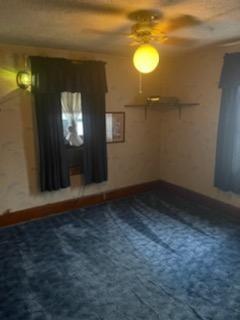 The stairs to the attic/third floor. They are steep, but the carpet is padded. Originally I was sleeping on the top floor, because I like the view over the neighborhood, but getting to the bathroom when I’m half asleep is treacherous. I’ve bounced down a few of these stairs several times, holding onto the hand rail. 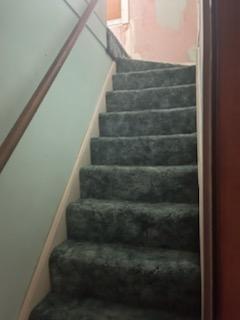 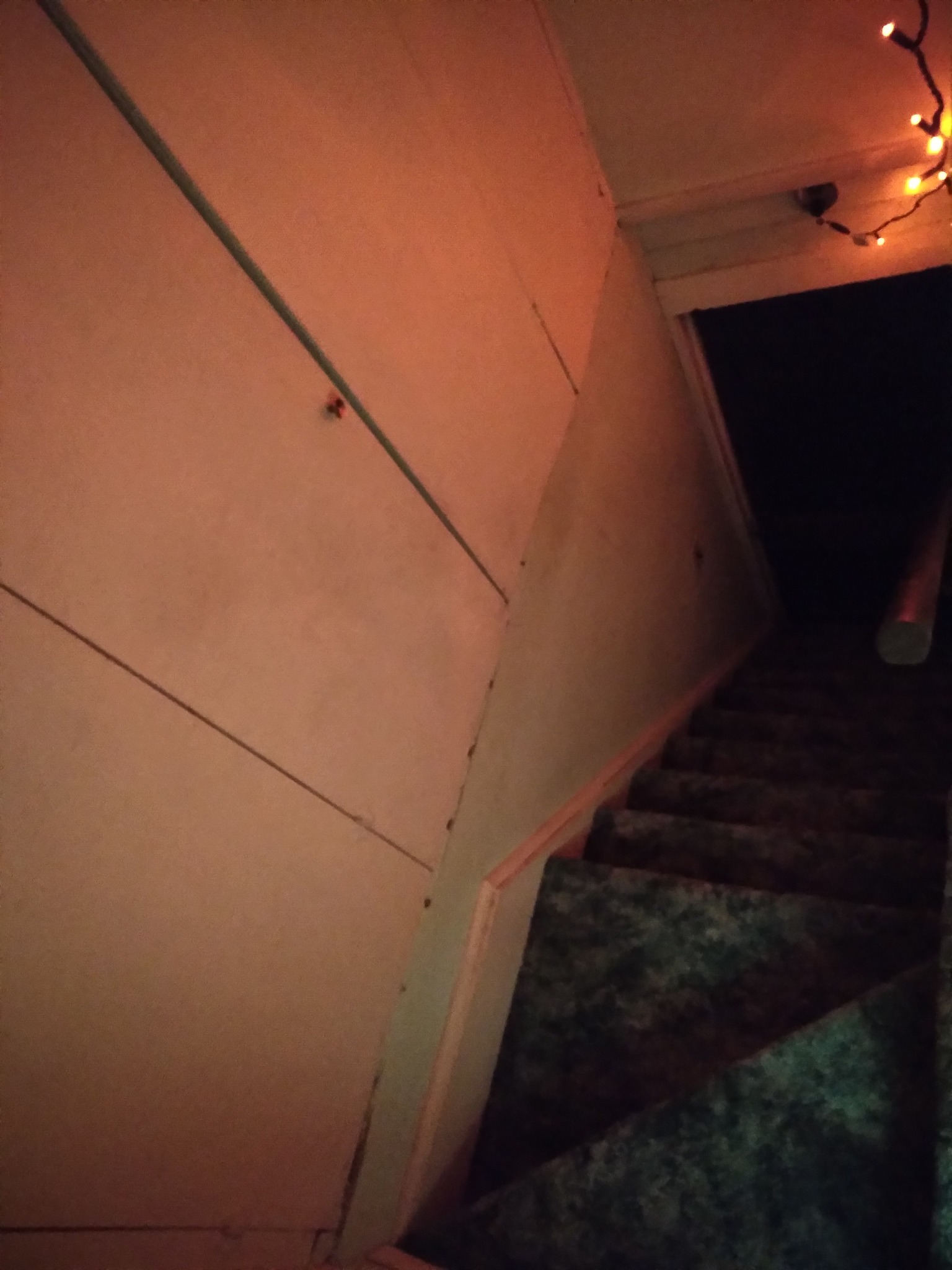 The attic room before we got here. The previous owners left a heavy, 6’ across desk. I’m sitting at it as I type this. This was a sewing room. This desk has a yard stick glued to the front edge. I debated removing it, but it comes in handy. 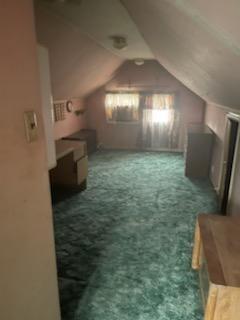 The attic closets. The Floofle was inspecting my sweater. Eventually I’m going to put a black light, some flocked posters, and a bean bag chair in there. I’m storing my clothes in one of the second floor closets. 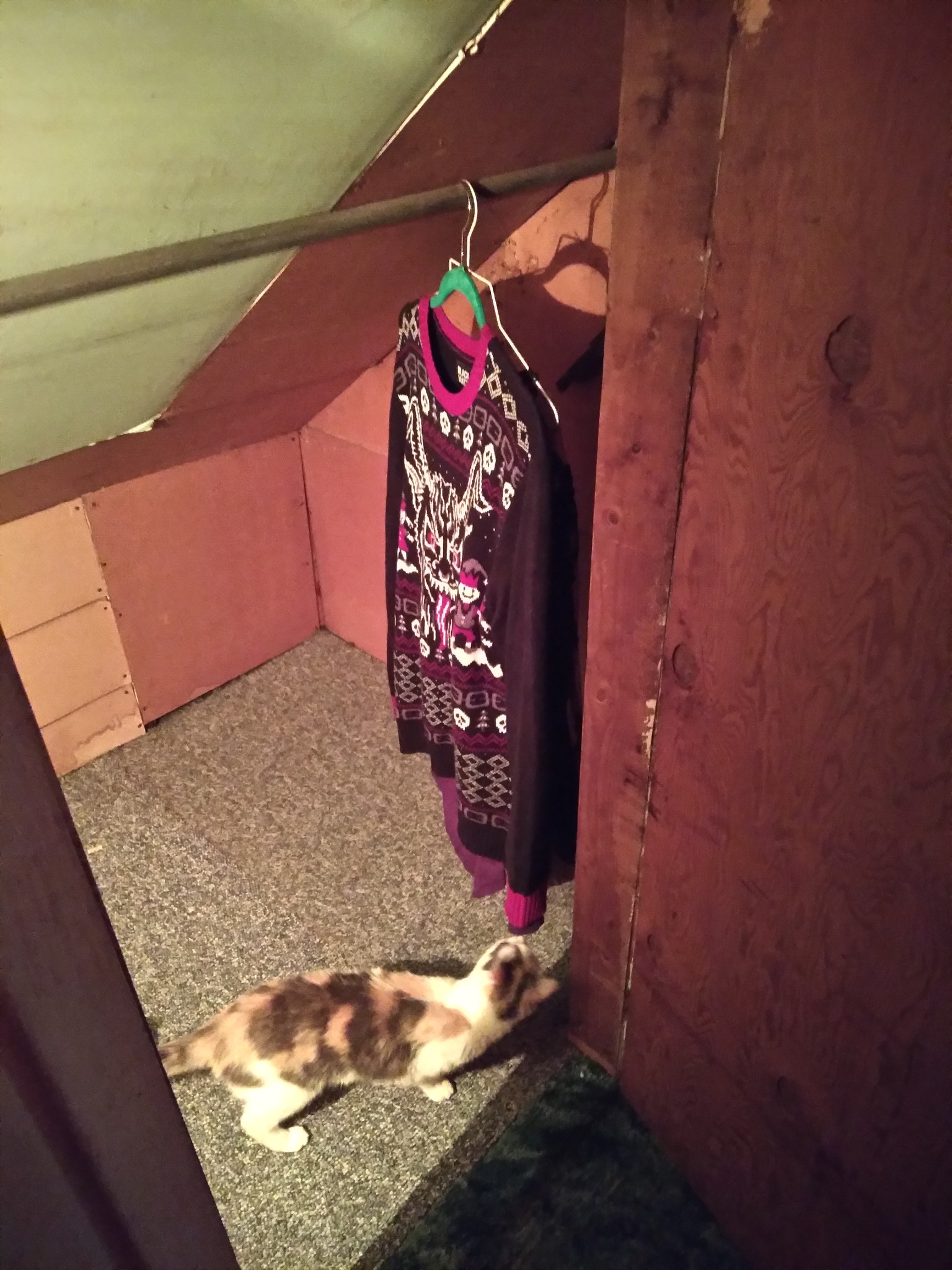 Sema in the west side closet, before I put anything in it. The one on the other side is very similar. 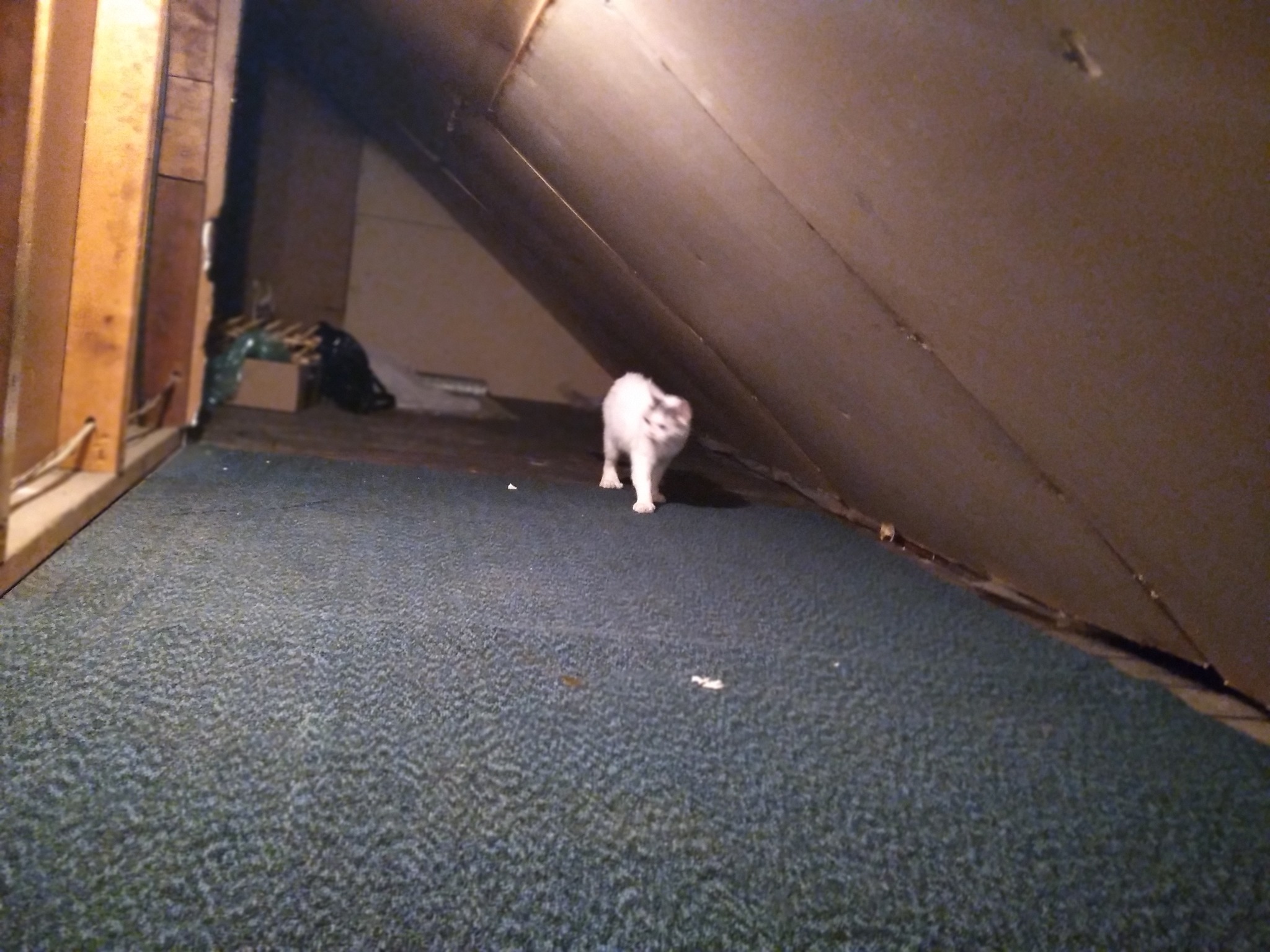 The view from the attic when we first moved in: 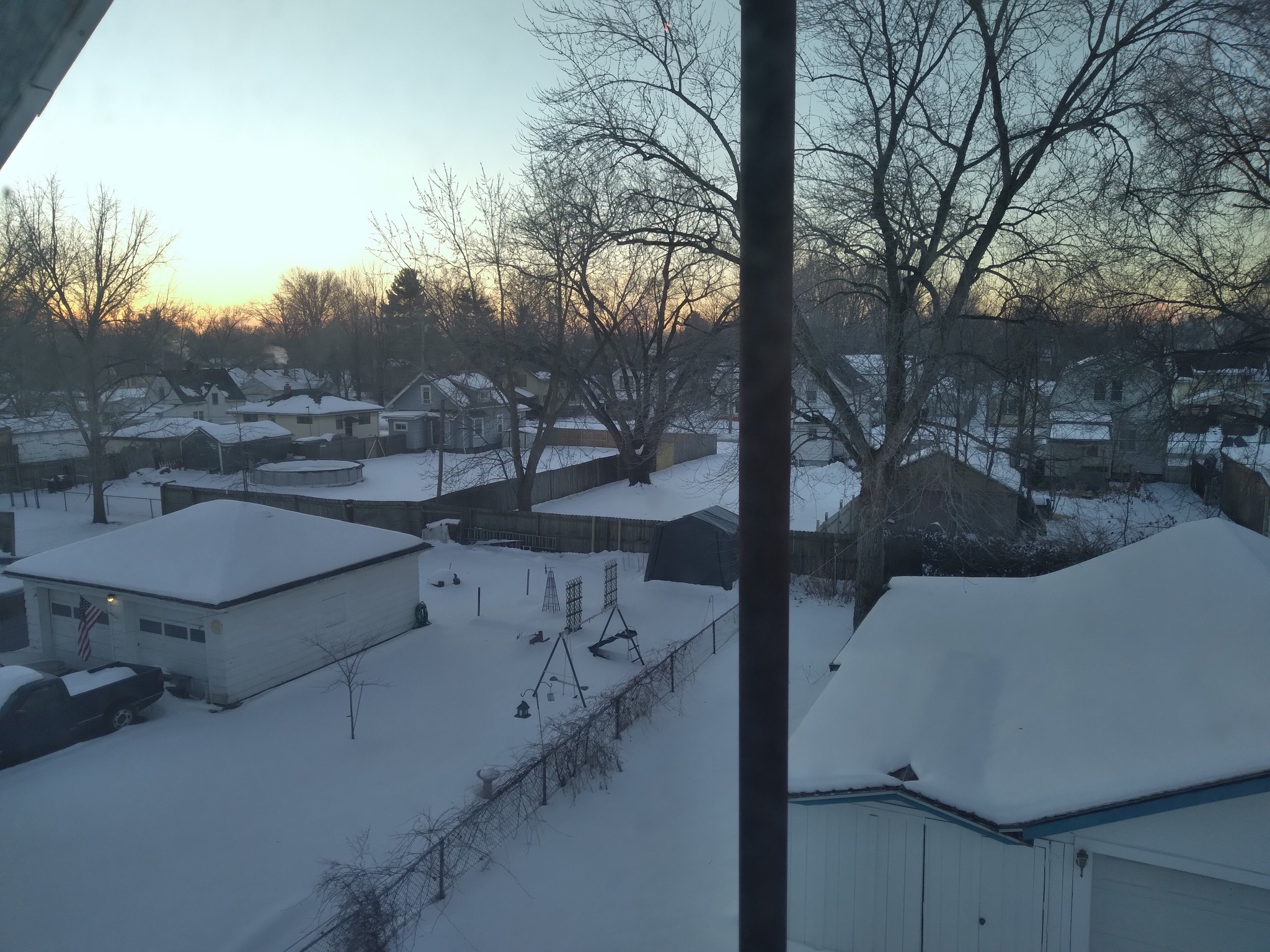 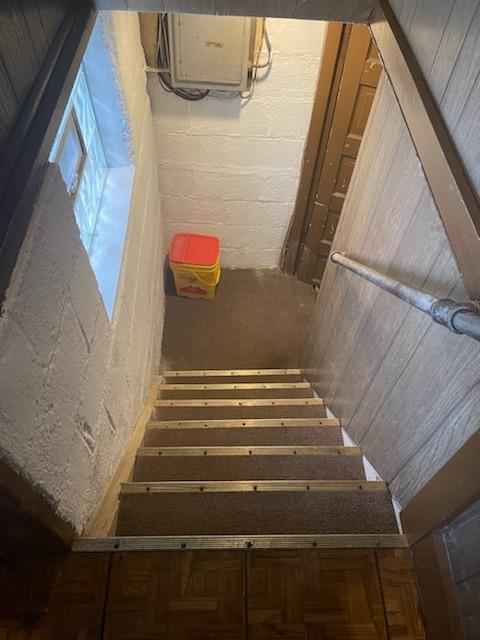 What I’m calling the ‘rec room’ when we first arrived. The old couch is super comfy despite the age and stains, so I’ve put a couch cover on it. The hide-a-bed interior had old kid’s drawings, golf tees, and cat toys in it. 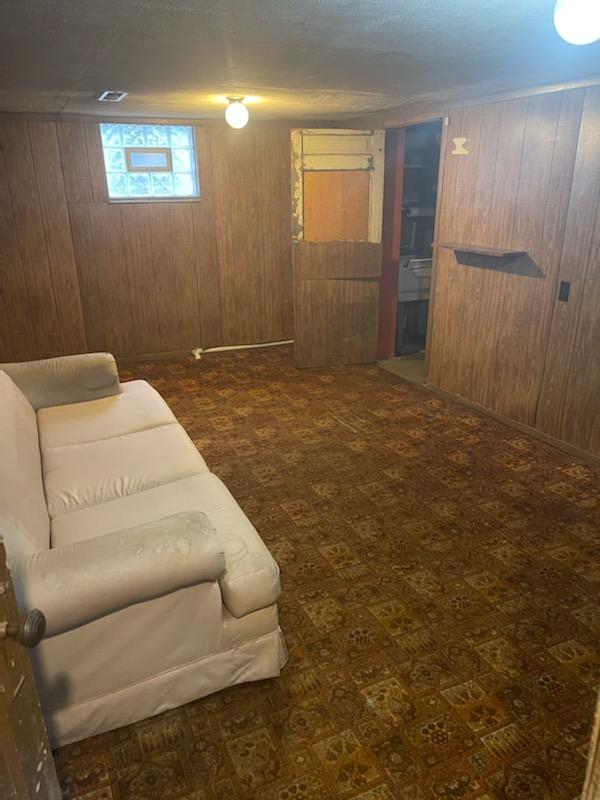 The rec room closet, under the stairs. I’m calling it “the Hole”, for obvious reasons. I’ll be scraping and painting it at some point. 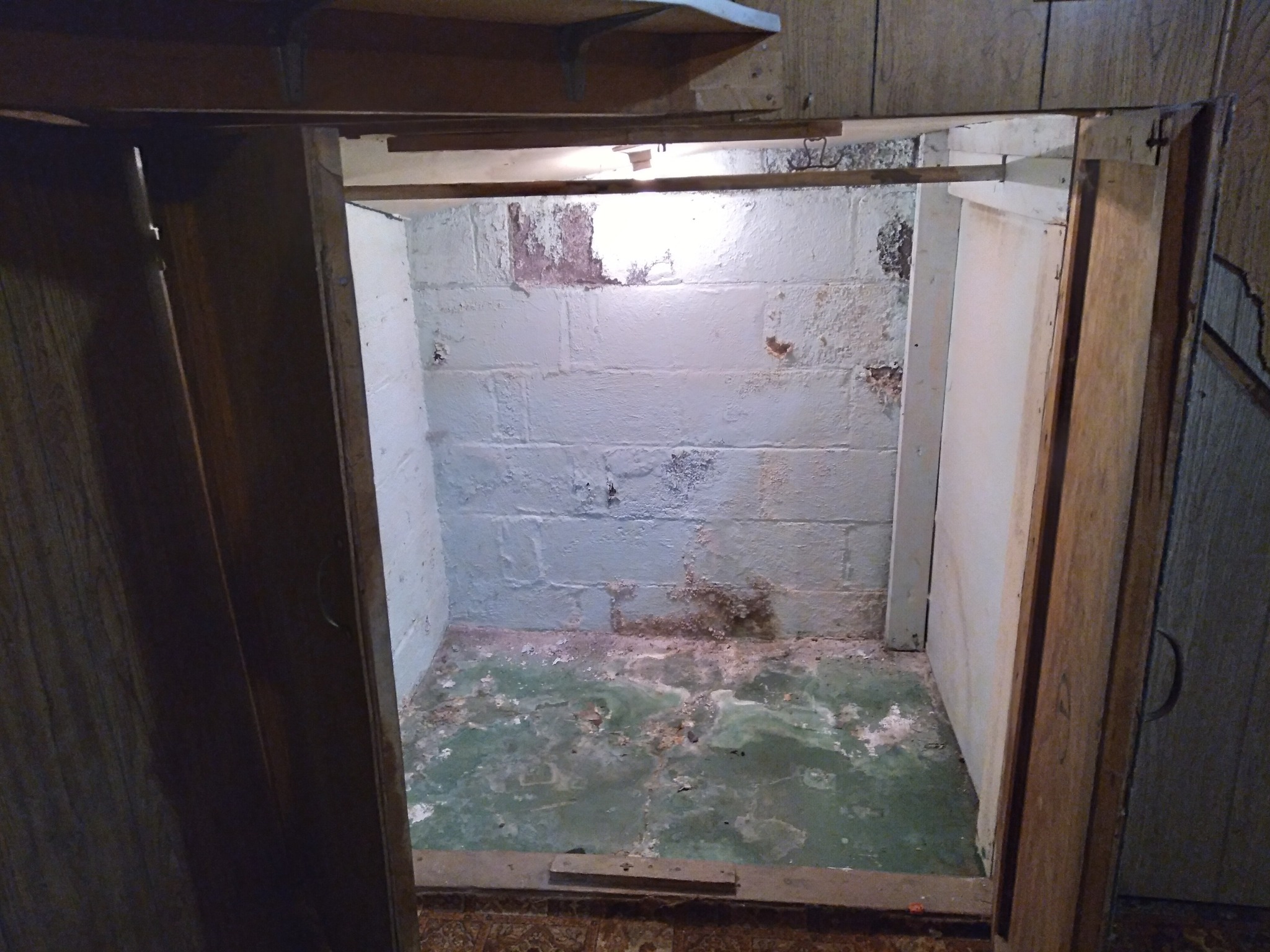 Pass through the rec room, and you arrive at the laundry area. Love the home made shelves, closet, and file cabinet space at the end. 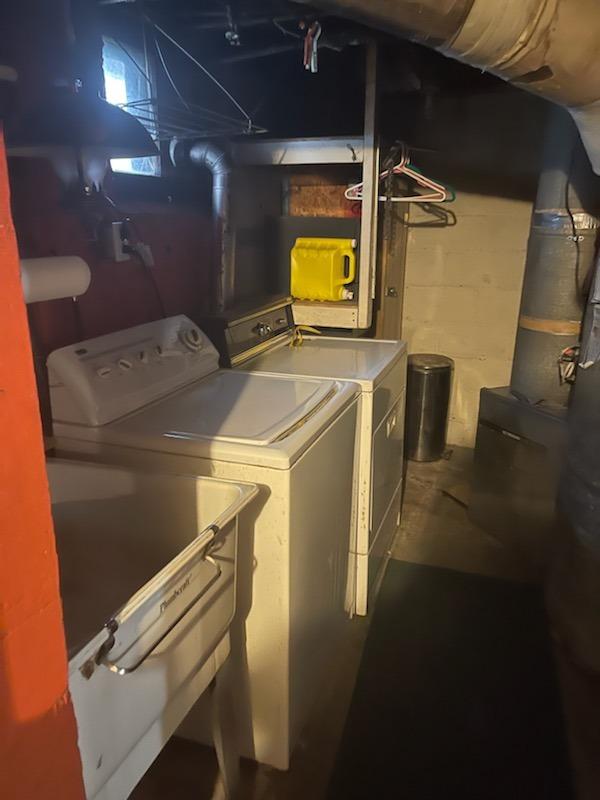 To the right of the laundry, you have the original, 1925 “octopus” furnace, converted from coal to gas at some point. I named it George to help overcome the spooky factor, because it looks like a crematorium, and sounds like an airplane when the fan is running.
Yes, we have carbon monoxide detectors. 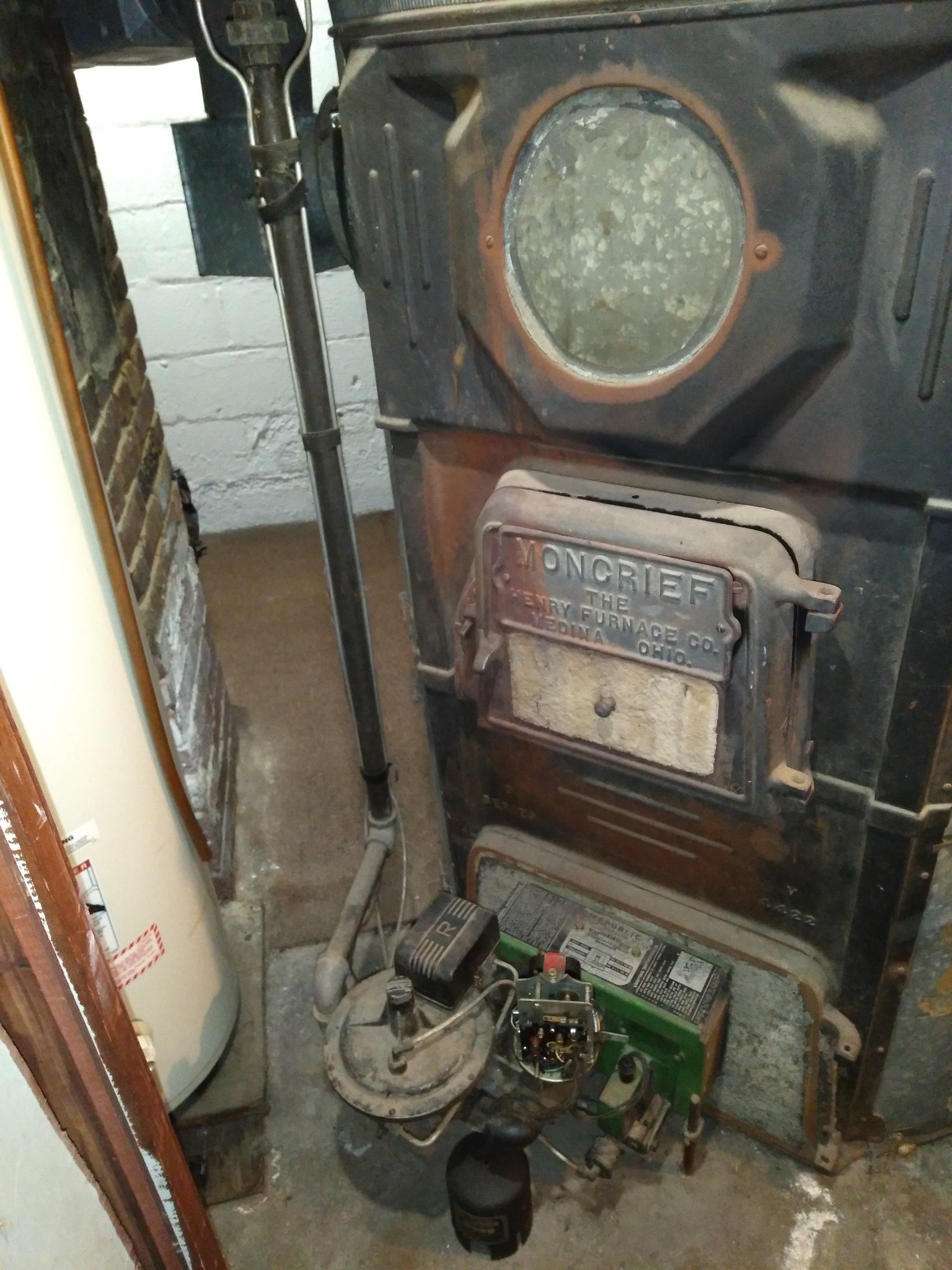 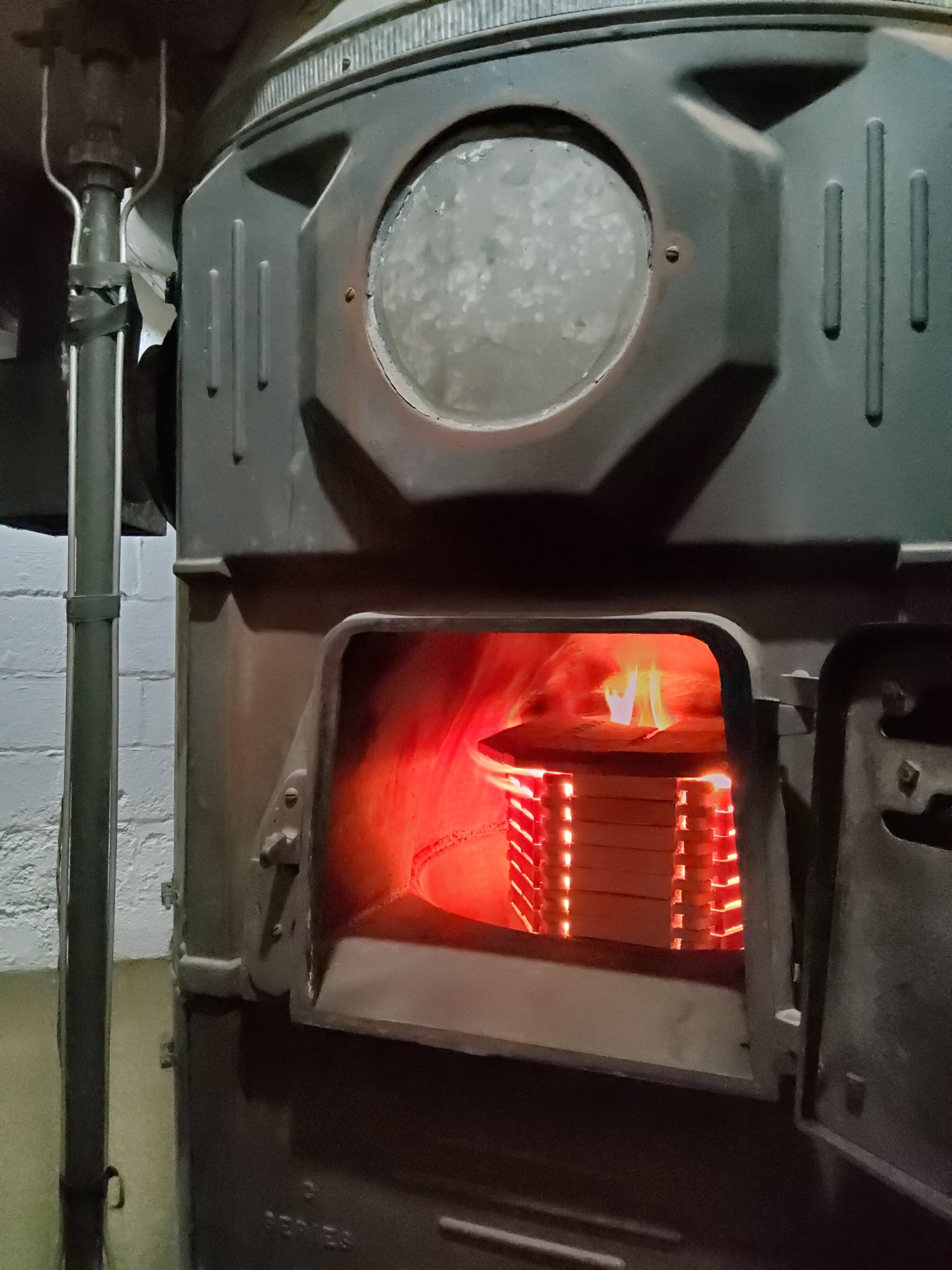 Turn right at the furnace, and you’re faced with what I’m calling the Ed Gein Memorial Closet, because there are hooks all over the wall and ceiling, and a speaker mounted in the upper corner under the stairs. That thing on the wall is an old steam iron, in a caddy designed to hold spray bottles for it. 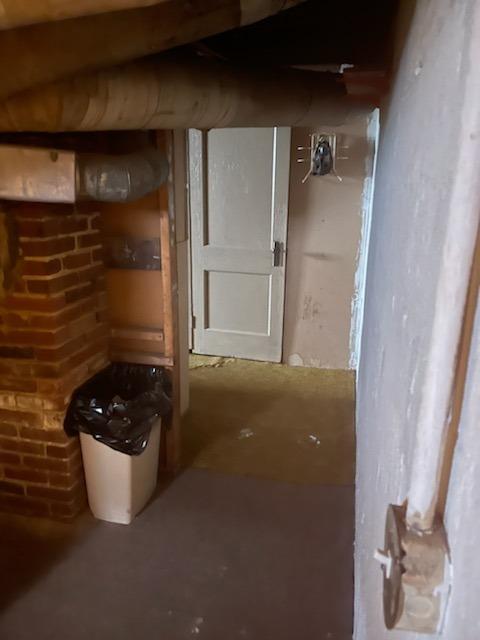 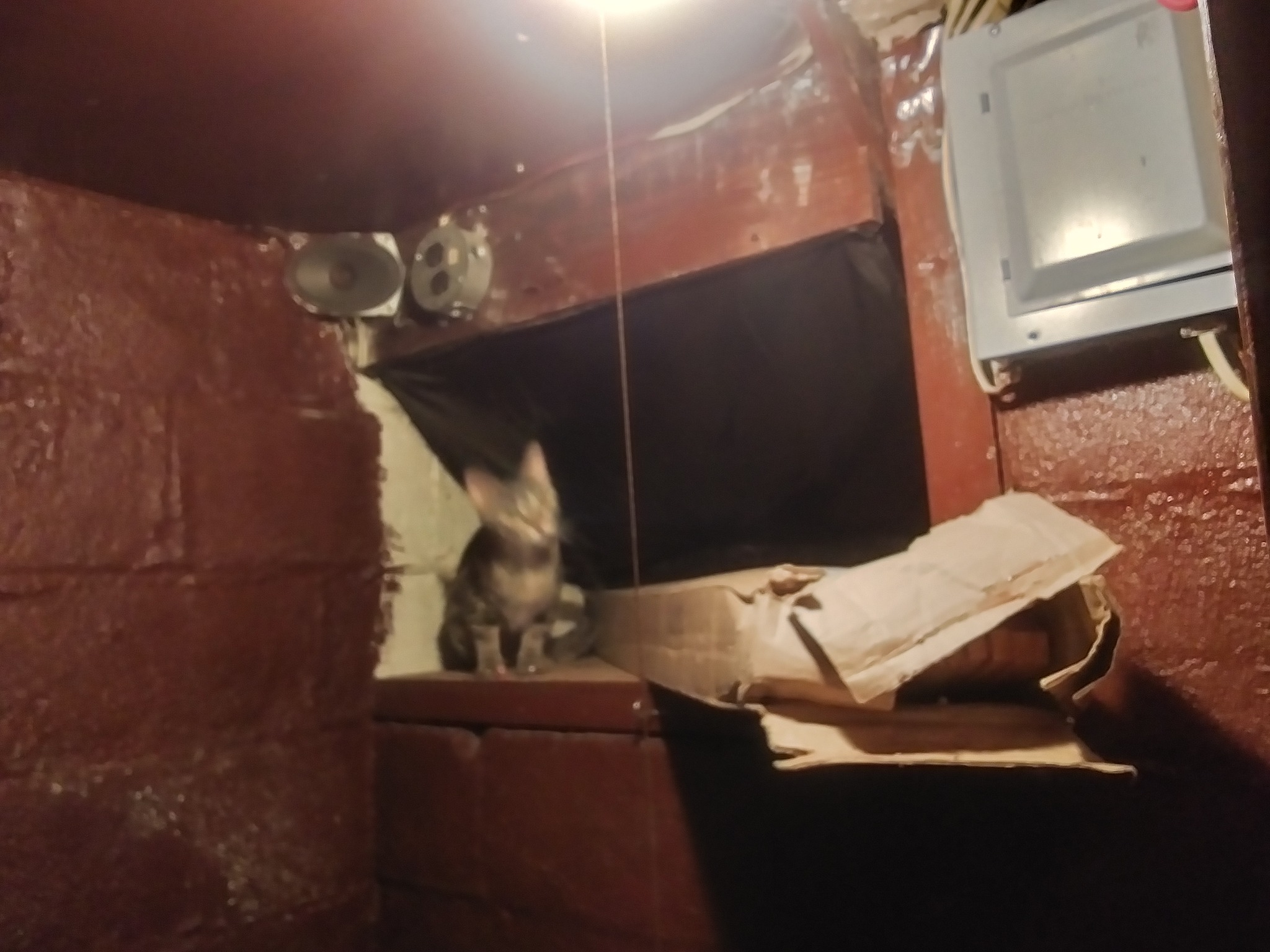 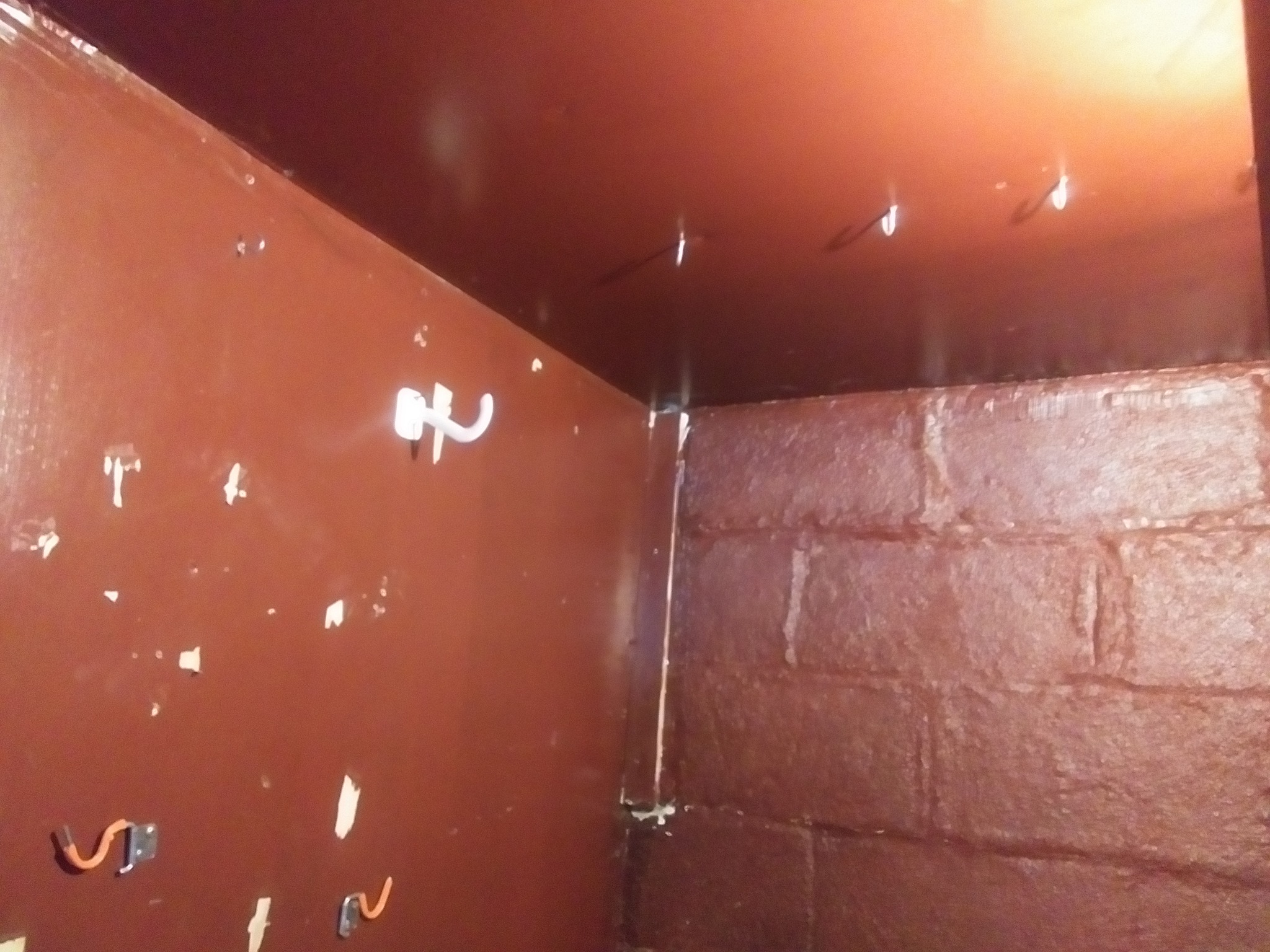 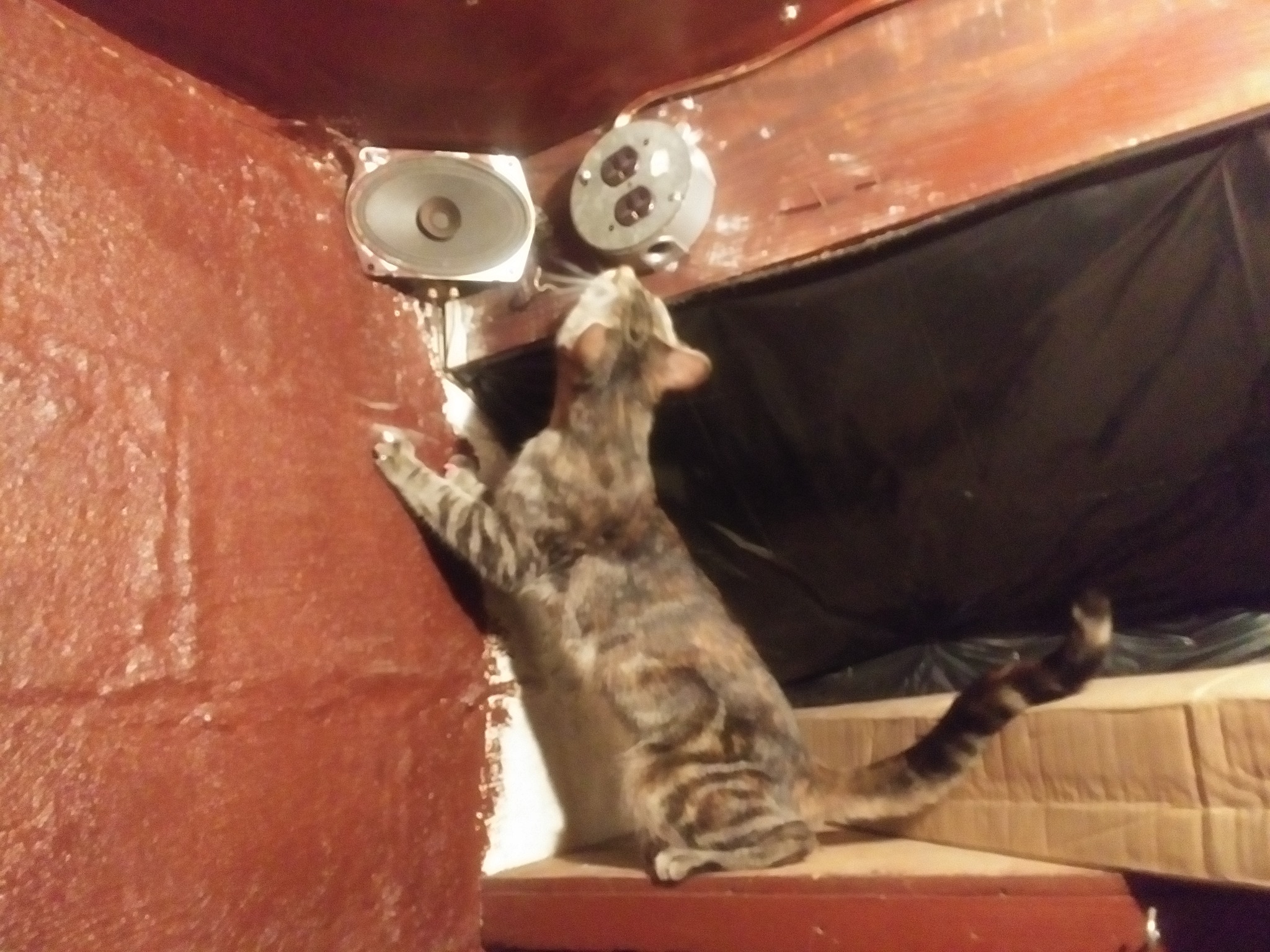 Turn left at the Ed Gein closet, and you’re at the basement bathroom. I’ve put a new seat cover on the toilet, and a couple rugs, cleaned the shower, vacuumed, and filled the shelves with tools and such. At some point I’ll put up a curtain to separate the bathroom from the rest of that area. Don’s putting a cabinet on the wall beside the toilet, and some fresh carpet down. 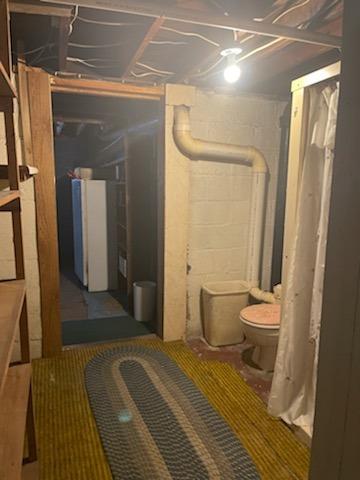 Last but by no means least is the back room in the basement. Three of the walls are floor-to-ceiling shelves, with a refrigerator and an upright freezer in the corner. 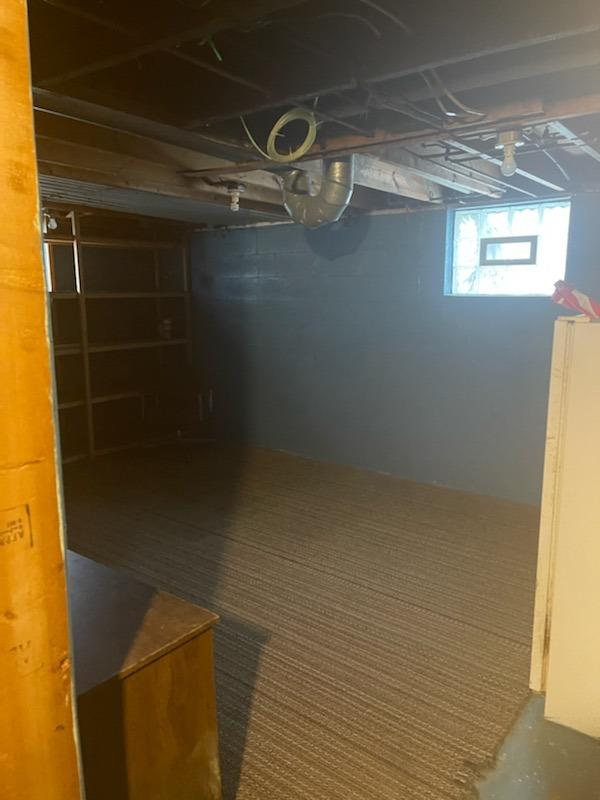 The plan is to move those. The freezer will go across from the basement toilet, and the fridge will go into the Ed Gein closet, and we’ll repaint that closet, put a little microwave in it, and a small table beside it. Then a guest could conceivably, effectively live in the basement, were we ever to have a long term guest.

Originally, I thought my favorite niece would be coming here, and it would’ve provided a nice space for her or one of her boys, but she believes the delusional conspiracy theories about vaccines, and so do her kids; and Don and I are in at-risk categories for covid. So we won’t be hosting any anti-vaxxers. Not even the family member I otherwise like the most. But that’s a disappointing tragedy deserving of its own entry.

The front yard in the snow: 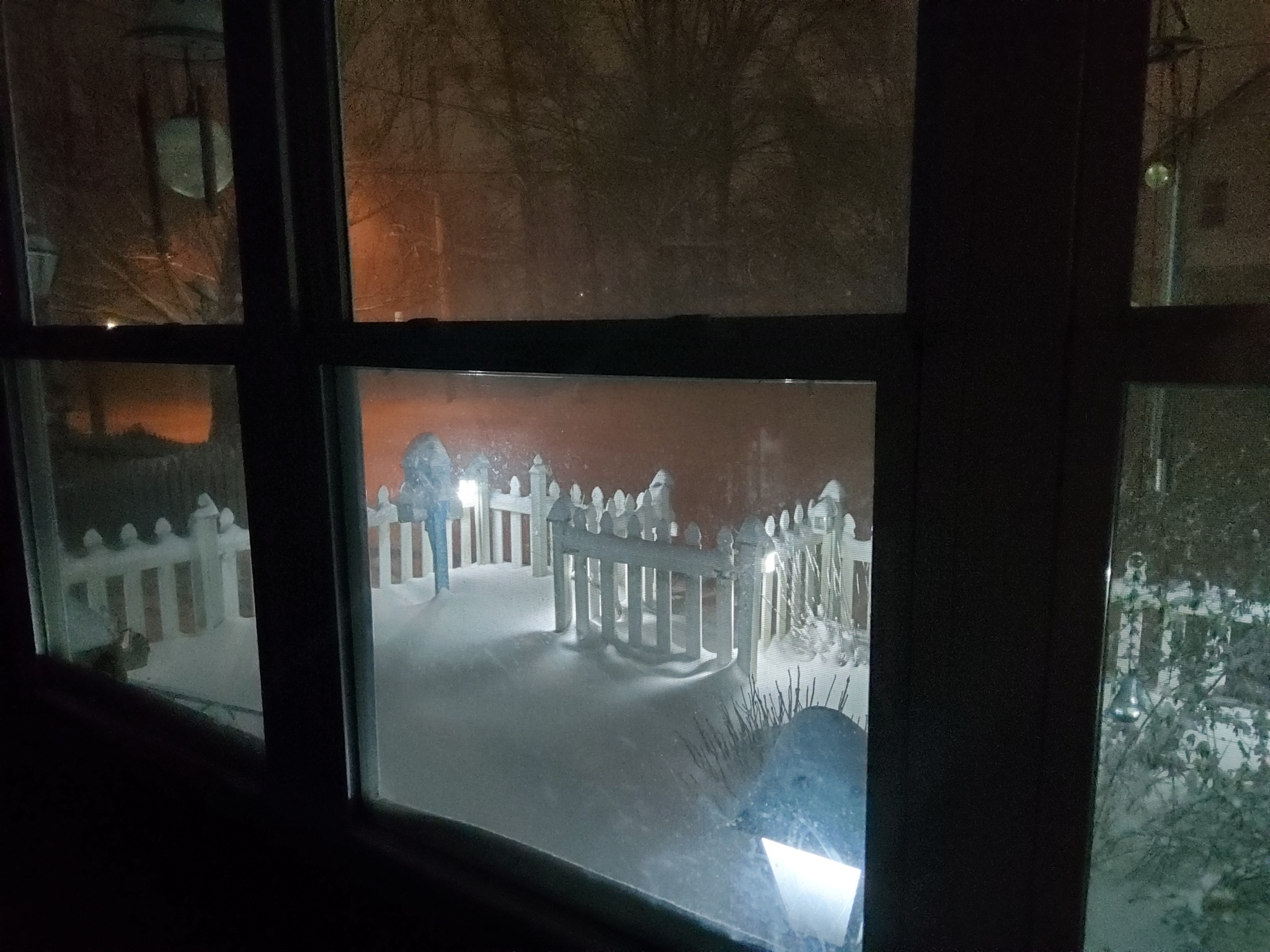 This is pretty damn cool, truth be told. We bought an old house with wood siding and everyone was like, "Why would you deal with the hassle of wood siding?" but it gives the house character. I like our weird old off-center slightly-tilted-in-some-places house :)

Also that price is RIGHT. Good for you!

Thank you so much! Weird old houses are the best, absolutely.

Thanks for posting this, I enjoyed the tour! It's a lovely house full of character! 😍

I wish I spent only $37k on my house! but it looks like you'll have a lot of fun putting this house together =)

Thank you so much!

What? I don't even understand...I mean, it's definitely haunted, but still.
A cool million in my area gets you a 2 bedroom 1 bath with no garage or driveway, bars on the windows, and complimentary neighborhood gun violence.

Oh yeah, a million is cheap. If you want a home in a nice neighborhood you're looking anywhere from 1.3 - 1.6 million.