Your rule of thumb makes me worry some. in Politically Speaking...


If you’re like me, you went to get your mail last week, looking forward to your new issue of The New Yorker but also expecting an avalanche of junk mail. Then you opened your mailbox and found this hot bullshit, along with your yuppie ‘zine and ads for Dollar General: 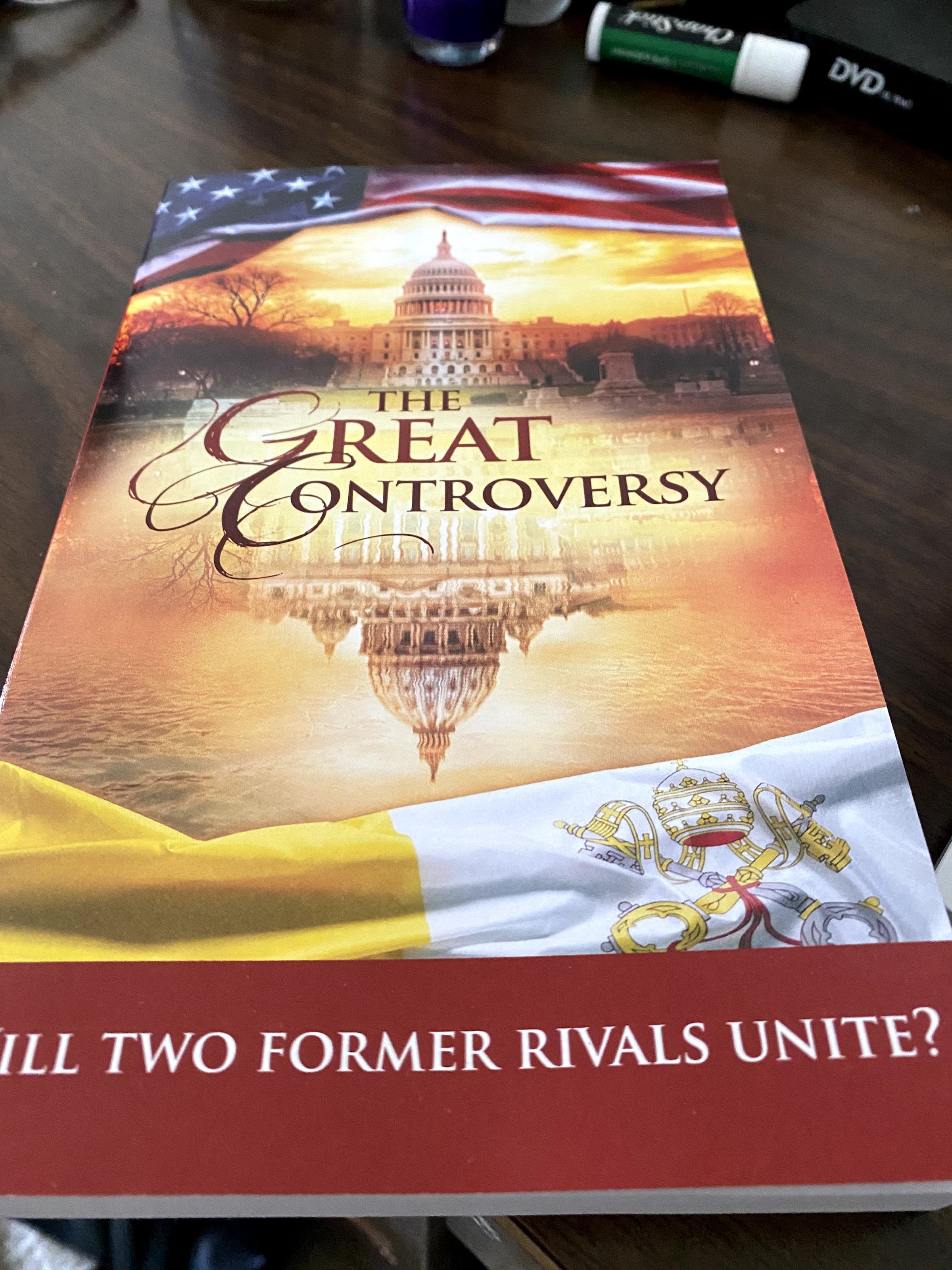 For those of you who can’t see the picture, it’s of a book called The Great Controversy, originally published in 1858 by Ellen G. White, one of the founders of the Seventh-Day Adventist church.

Now, do I have anything against the Seventh-Day Adventist church? Not really, except that they assaulted me with their beliefs when I neither expected nor wanted it. Which is my problem with religion in general: I have little to no desire to have any part of it. I’m not going to burn down anyone’s house of worship, but I’m also not going to go and be part of the service. Have your religion, if you want it, but respect the right of others to not have religion, if they don’t want it.

Think of it like a Thanksgiving turkey: Even if it’s the centerpiece of the table, not everyone wants a piece of it. Some people don’t like turkey. Some people don’t eat meat. Some people just stuffed themselves with mashed potatoes and stuffing and just don’t have room for anything else. A few people have a personal problem with turkey, and a rarer few hate turkey and everyone who likes it. And then there are those who simply don’t want a place at the table.

Now replace “turkey” with “Christianity.” And if the turkey is Christianity, think of the mashed potatoes as Judaism, the green beans as Islam, the stuffing as Buddhism, the sweet potato pie as atheism, and the pumpkin pie as Wicca. (I know, there are more sides and more religions than that, but I’m trying not to get lost in my own analogy.) You get people sitting at the table, partaking in a little bit of everything, but everyone has their own favorite dish. And then, you have some people who say, “You know, Thanksgiving is basically a celebration of the start of almost four hundred years of government-sanctioned genocide against Native Americans, who are still suffering to this day. If you want to celebrate it, fine, but I don’t, so please don’t ask me.”

In that analogy, if the person who has opted not to celebrate Thanksgiving or partake in the Thanksgiving feast, while acknowledging and accepting the right of others to partake, then has their mouth wrenched open and a drumstick shoved down it by the person who loves turkey, does the person who loves turkey then have the right to say, “I feel like my freedom to love turkey is under attack”? Similarly, does the person who love turkey get to feel “attacked” by the people who love green beans and mashed potatoes, just because they say, “We should have our freedom to love green beans/mashed potatoes respected as much as turkey lovers’ freedoms”?

This is an argument I’ve been having with my ultra-religious mother, who says she “doesn’t know” who she’s voting for (which means “I’m voting for Trump, because sociopathic billionaires’ lives matter more to me than the life of my bisexual, dissident daughter;” thanks, Mom), but she’s constantly crowing about how her freedom of religion is under attack. I’m pretty sure I’ve said this before, but if you talk to my mother, the one thing you will know about her, beyond the shadow of a doubt, is that she really, truly believes that the world is out to get her, only because she’s a Christian. Anyone who isn’t a Christian is a threat to her. Anyone like me, who is not only not a Christian, but also believes that Christians shouldn’t get special religious privileges if Jews, Muslims, and other religious people don’t get the same, is “persecuting” her and telling her she has “no right” to her beliefs. Seriously, Jesus Christ himself wasn’t half as persecuted as this one, totally average, 61-year-old, Midwestern white woman.

But I maintain that the fact that a Christian publisher used the United States Postal Service, a government-owned and operated entity, to mail a copy of their religious tract to everyone in the country, regardless of their religion, personal views, or even whether they wanted a copy or not, is proof that HER freedom of religion is not only alive, but kicking. At the same time, I will use that fact as proof that MY freedom to not partake in religion is under attack.

What is my mother’s justification for thinking that Trump will protect her religious freedom? He’s a Republican, and Republicans are Good Christian Folks, who are deeply spiritual and connected with the Lord Jesus Christ.

…I know this is my mother I’m talking about, but:

I am not even close to sorry for saying this: If you believe that Republicans are “good Christians,” and therefore “good people,” you are a fucking MORON. A complete idiot. You should not be trusted to tie your own shoes, never mind drive a car, and you especially should have your right to vote seriously questioned. The ONLY reason Republicans have a thin veneer of a reputation as “Christians” is because that’s where the money is, and these idolators follow the money. Fuck Jesus, fuck Joseph, especially fuck Mary (who, I’m sure, they think of as a slut, because to a Republican, if it has tits and a vagina, it’s a slut and it belongs on their dick), and fuck the actual teachings of Christ. If it lines their pockets to pander to Christians -who, by the way, I feel absolutely no pity for, so long as they keep accepting the pandering- that’s what they’ll do.

There are people of practicing faith in the Democratic party, too. Alexandria Ocasio-Cortez, whom my mother hates with a flaming purple passion, is a practicing Roman Catholic, as is Joe Biden. Bernie Sanders is Jewish, but having a Jew in the Senate is, I’m sure, “persecution of Christians” in my mother’s opinion (she about had a heart attack when Ilhan Omar was elected to the House, because to her, this was “proof” that Muslims were “infiltrating the government.”) I would say that well over 90% of Democrats in the House and Senate are some flavor of religious, and of those, well over 95% are some denomination of Christian, because the vast majority of the voting public is some denomination of Christian, and in American politics, like votes for like. The fact that my mother chooses to ignore this very obvious fact, so she can demonize Democrats and disregard everything they say as “endangering my right to be a Christian,” is just what she does: She refuses to listen to anything that doesn’t satisfy her need to be both right and persecuted at all times.

Now. The fact that most Democrats are Christians doesn’t make them “better” than Republicans, nor does it make them “just as bad,” which is the other direction this argument can go. A person can be good or bad, regardless of religion, and that’s not even the point I’m trying to make.

My point is that it’s idiotic, and recklessly so right now, to assume that a sociopathic, money-worshipping, toxic narcissist like Donald Trump, whois very obviously pretending to be a Christian for his own personal gain, is going to actually protect your religious freedom. Because he won’t. Just like he didn’t protect the middle class from getting assfucked without lube at tax time. Just like he didn’t protect anyone from COVID-19. Just like he doesn’t protect or do right by ANYONE who he can’t use to further his personal and political agendas.

It’s like the low-income yokels who voted for him because “he loves the little guy!” Um, no, he doesn’t. I don’t know how they’re not seeing this. Donald Trump HATES the little guy. He finds ways to screw over the little guy, and he always has; look at how many plumbers and builders and workaday laborers who’ve had to sue him for payment for services rendered, and look at how often he’s declared bankruptcy, “coincidentally,” which is a great way to get out of paying your debts, by the way. (But people who went to college, to increase their chances of getting a well-paying job, and are saddled with tens or even hundreds of thousands of dollars of student loan debt, which racks up 11% interest monthly, while making $34,000 a year and unable to afford the studio apartments that money-grubbing landlords charge $1500 a month for, these people can’t declare bankruptcy to discharge their student loans, because that’s “irresponsible.” Republican logic never fails to amaze me, or give me pounding headaches.)

Then, when you’re done spying on Mar-a-Lago, take a look at Disney World’s satellite images. There are at least some trashy-looking people at Disney World. There are people in wheelchairs and on scooters, and kids there by the grace of the Make-A-Wish foundation. (Oh yeah, how many times has the Hero of the Good Christian Folk and Obviously the Second Coming of Christ Himself gone to hospitals and spent time with the sick? None, that’s how many, because he doesn’t give a lackluster fuck about them, and he’s a “germaphobe.”¹) There are people there who have clearly scrimped and saved for years to go to The Happiest Place On Earth for a day or two. There are a ton of average- and below-average looking people there. Disney World and Disneyland are full of those people. And you can make every argument you want about it; the fact is, Walt Disney and his living descendants were far more accepting of those people than Orange Shitgibbon ever was, or ever will be.

And, just to be clear on this, since I went on a slight digression: DONALD TRUMP GIVES NOTHING CLOSE TO A DAMN ABOUT RELIGIOUS FREEDOM. Yours, mine, his cronies’, anyone’s. If it doesn’t make him money and get his massively outsize ego stroked, he won’t hesitate to throw it under the bus. And the Republican party writ large is exactly the same. “Follow the money,” is their motto, and there is no money in protecting anyone’s freedoms.

The one good thing about getting this stupid fucking book in the mail, though? When there’s a second lockdown and people go out and panic-buy toilet paper again, I won’t have to worry about having something to wipe my ass with. Page by page, I will make this unwanted and unasked-for tome of bullshit useful to me.


¹I know that germaphobia is a real thing, and it does incapacitate some people. But when it comes to Trump, specifically, I say “the gloves are off.” He lashes out and belittles everyone for any reason he can think of, and clearly going high when he goes low doesn’t work, because, as the last four years has made glaringly obvious, there is no low to which he will not stoop. None. We are well past the bottom of the barrel, with regards to his rhetoric, and he literally just told a crowd of his white-ass supporters that “you have better genes,” which is exactly the argument made by white supremacists as to why white people are superior. There is no “civility” when dealing with this type of white trash.