And over this river broke the winter’s black weather. in HOW MANY PUBLIC BOOKS WILL I MAKE AND THEN EVENTUALLY PRIVATIZE


OH, HELLO, SEPTEMBER. NICE TO SEE YOU THERE.

No, it’s fine. It’s aaaaalllll fine. I just… It’s dark before 8PM now and we’ll lose an increasing number of sunlight minutes every day and I’m obsessing over it. OBSESSING.

I’ve never clung to daylight this much in my fucking LIFE. I’ve never kept track of sunrise and sunset, or paid attention to the weather more than a day out (and rarely even that). But this year with my BAD FEELINGS seeming to kick in right when it gets dark, I’m just… I’m dreading winter. I’m DREADING it.

I was dreading Zardoz and Zelda leaving town, and now it’s only three weeks away and I’m… almost at peace.

So a fun thing happened last night. Screenshots of my convo with Other City Coworker–which is still the WORST nickname for someone who has become one of my best friends and closest confidants over the last year, but IT’S CONFUSING WHEN I CHANGE PEOPLE’S NICKNAMES LOL. 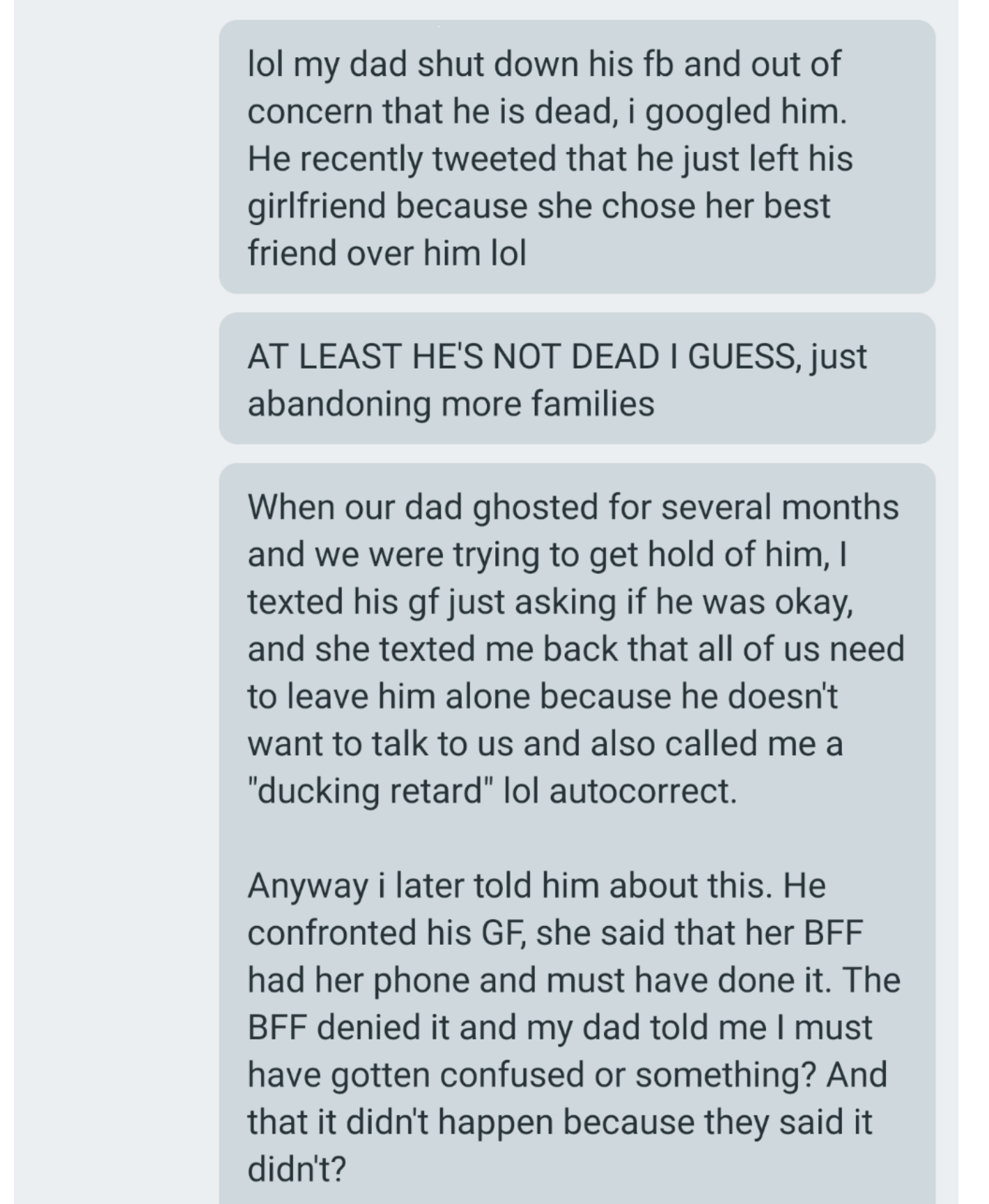 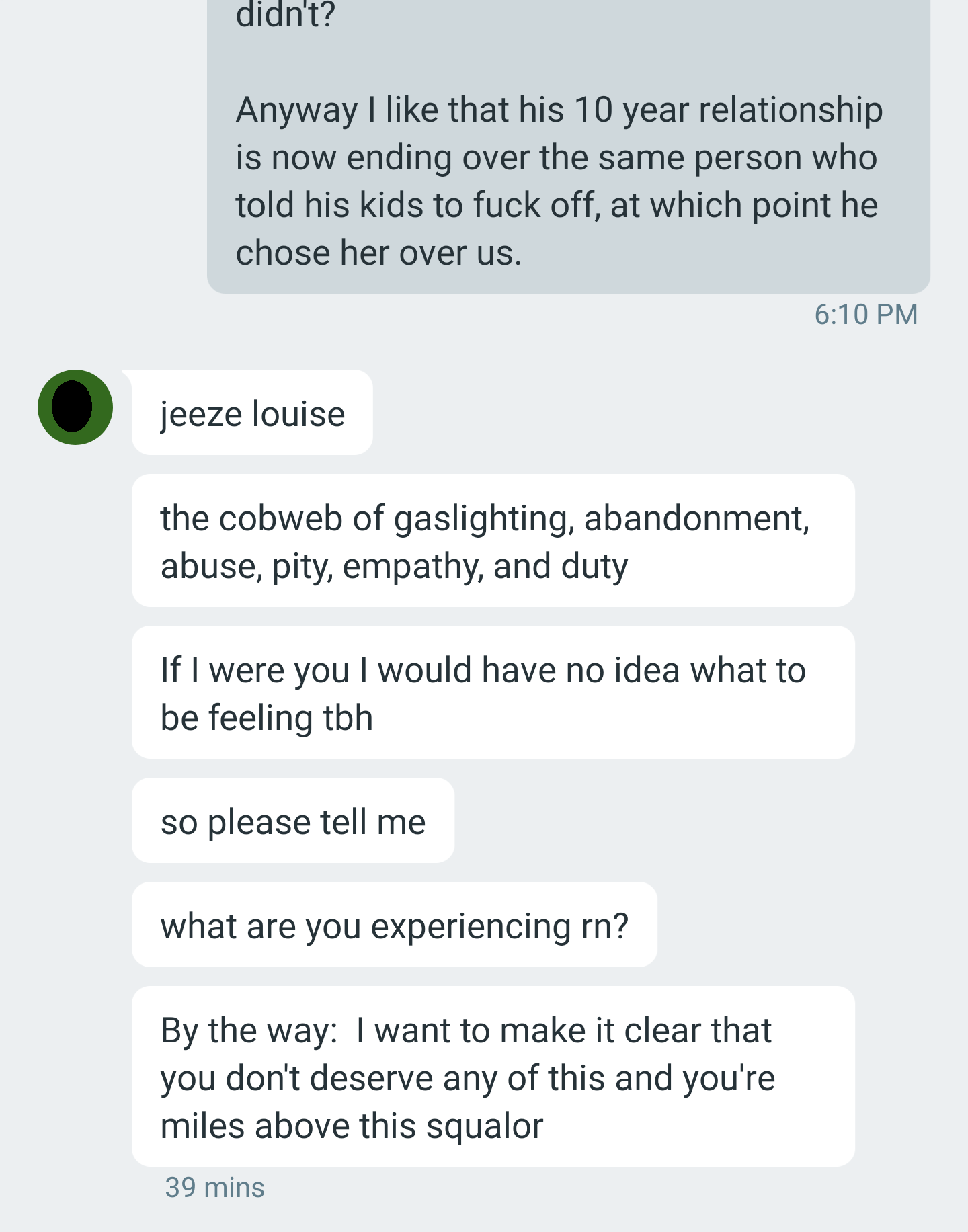 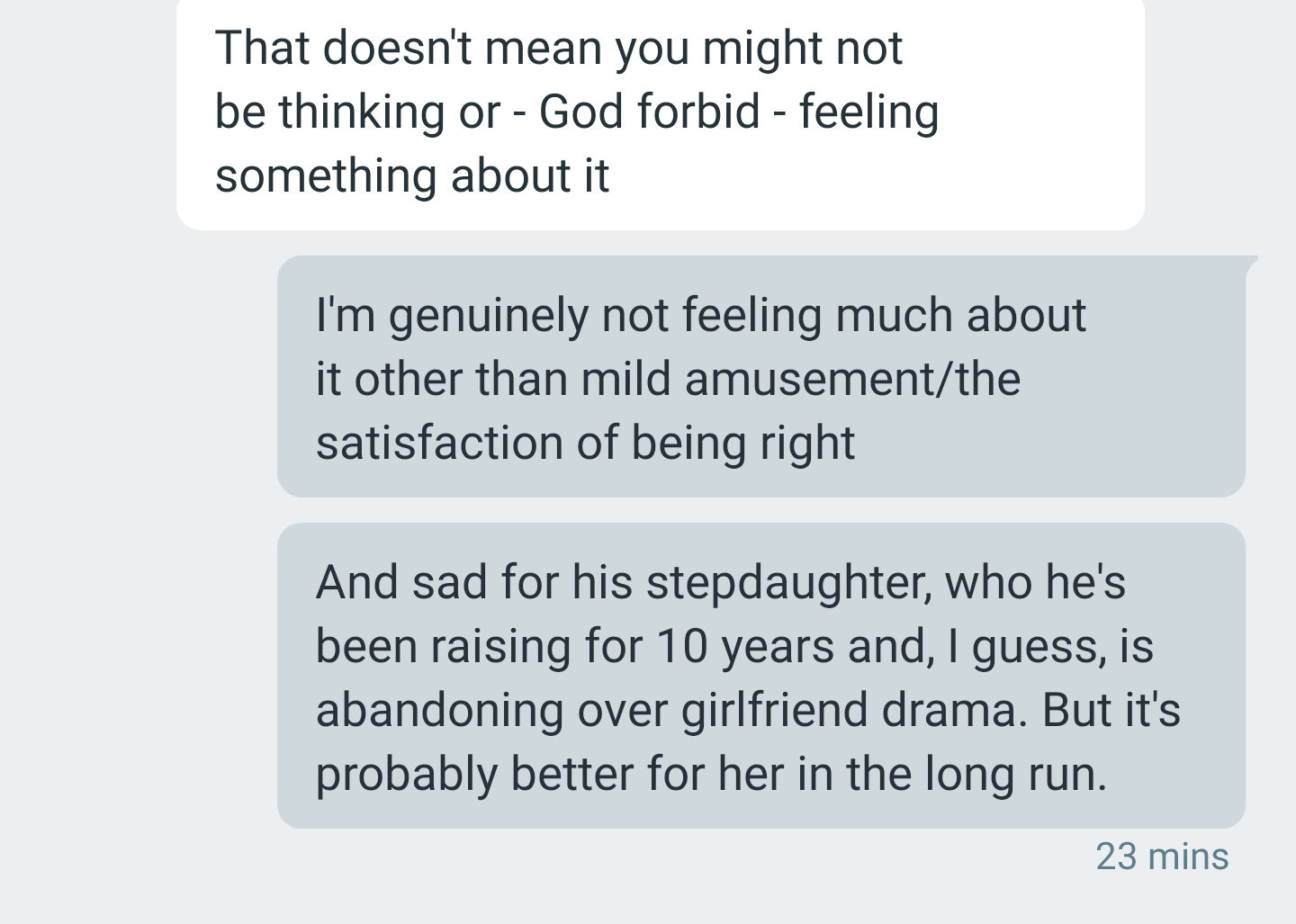 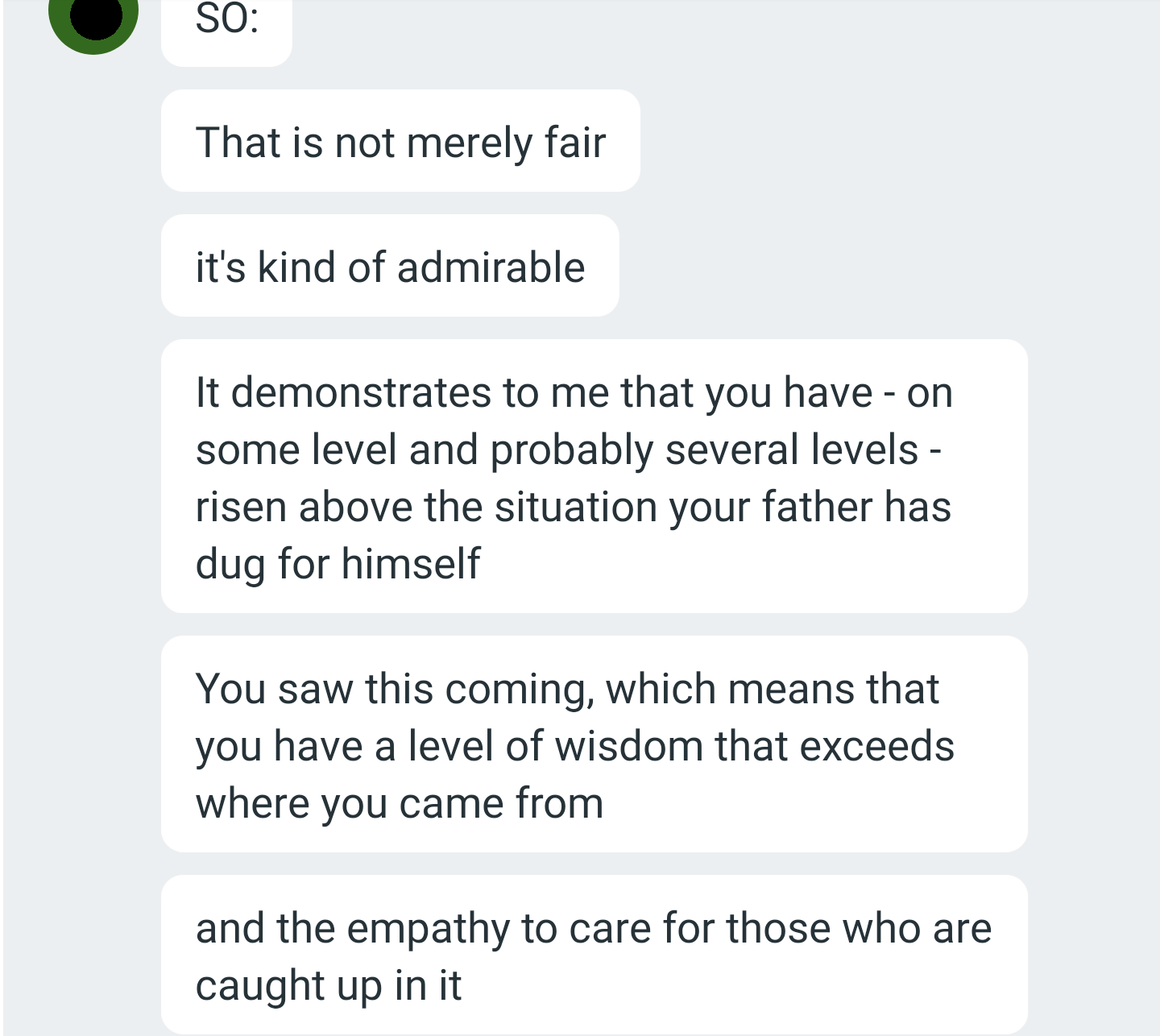 TL;DR: My dad abandoned another family and I have amazing friends.

He’s getting too old to keep doing this, y’all. He just turned 59; how many more kids can he possibly raise, even the pre-baked variety?

Anyway, after this convo I made sure to tell OCC that I really appreciate him. For someone who claims to not have feelings (mostly jokingly, kinda seriously), he sure is one of the most empathetic people I’ve ever met.

He doesn’t like a lot of people, and his dislike is a lot more intense than most. He has empathy for the species, but not nearly as much for individuals within it once he gets to know them. But for those he actually likes and gives a shit about, he’s incredible to have on your side. Every time I bring this shit to him, he balances his analytical side with emotional validation and empathy. I can count on one hand the number of folks I know (IRL) who are both willing and able to do this. At least, in a way that resonates with me.

Also–it’s a high bar, considering how rare it is, but I think the ability to do that is something I need in an LTR, if I ever choose to have one again.

I can feel a part of my brain yelling “you’re expecting a partner to be a therapist and you ain’t even payin’ ‘em” but that part is an asshole and wrong.

Not only are relationships not transactional (well, no, well, okay, sometimes they are?), but I do this for my friends too. I’m not asking for free advice; I’m asking for mutual engagement in emotionally heavy conversations. I’m asking for someone to try to understand me so they can help me figure my shit out, which I do for my friends too because I think it’s an incredibly valuable aspect of human connection. And it’s totally okay if other folks don’t feel the same way; it’s not my place to tell anyone what they should and should not value in their relationships. But I think I need it. I think if my main squeeze is going to be a part of my ~ChOsEn FaMiLy~, I need them to engage with me like this.

AND, I need them to want me to engage like this with them. Not the case with my current person. No one is right or wrong; he just wants a different kind of support. And I can give him the support he needs! But it doesn’t make me feel connected to him in the same way.

Which again makes it sound selfish and dumb. “You must want to receive love in the exact way I find emotionally satisfying to give it.” But I don’t know how to change that. If all anyone wants is a hug and a joke, I’m not going to feel bonded with them. And if they emotionally connect with me out of obligation rather than desire, I STILL won’t feel connected to them. So… yeah, I need them to want to receive love in this way. At least sometimes.

IT’S OKAY TO WANT THINGS. IT’S OKAY TO HAVE STANDARDS EVEN IF THEY ARE HIGH. IT’S BETTER TO KNOW THIS NOW THAN GET INTO ANOTHER RELATIONSHIP WITH ANOTHER PERSON WHO CAN’T SATISFY YOU AND CONVINCE YOURSELF YOU CAN GET OVER IT. YOU CAN BE PERFECTLY CONTENT WITHOUT A LONG-TERM PARTNER AND THERE IS NOTHING WRONG WITH WAITING FOR THE RIGHT PERSON OR NEVER HAVING ANOTHER LONG-TERM PARTNER. YOU’RE A WHOLE PERSON AND INTEGRATING SOMEONE ELSE INTO THAT PERSONHOOD IS A CHOICE THAT SHOULD BE MADE CAREFULLY AND THOUGHTFULLY.

(No I do not want to have an LTR with Other City Coworker. Unfortunately. It’s just not there for me, lord knows why.)

In other news: I’ve been craving a new sexual experience for… A WHILE now. Like ugh, y’all. My shit turned itself off for a while and it was honestly a relief. Maybe upsetting my sleep schedule/entire daily habit meant my boner energy (bonergy) got redirected to rebalancing my body chemistry? Maybe I just… was too bored to want to fuck?

Regardless, it came back practically overnight. When this happened before, even if it was triggered by someone/something external, I could still channel that bonergy into LP and we’d have a rull good time. But right now, I’ll find myself running through a sexual fantasy while I’m doing dishes or whatever and he comes up behind me and touches me and I almost CRINGE. Like, there is a BIG OL’ BARRIER against making him the conduit for my bonergy.

Historically, this is a sign of the end times. I doubt this is any exception.

But, y’all. Even as I write about this stuff and folks comment like “yeah this is not good and should probably end, it sounds like you’re sure,” there’s a part of me that is also like… We’ve been trapped with each other almost 24/7 only a couple months after moving in together, how can I possibly separate my relationship problems from the circumstances?

I was alone for several hours most evenings, as well as most weekend days, for eight years. EIGHT. ENTIRE. YEARS.

Now, suddenly, I’m alone for approximately two hours once every two weeks when homie grocery shops. Which he only does during my M-F work hours, so I’m usually in calls with people anyway. So, not really… alone.

LIKE WOW, WEIRD THAT YOU’RE SICK OF HIM LOL. PROBABLY JUST BECAUSE HE SUCKS REAL BAD.

I’m not saying I’m writing off my relationship problems. Just ‘splainin’ why it’s particularly challenging to pull the trigger. We consciously chose to change/rearrange like, 50% of our lives, and before I had even the slightest chance to get used to it, world was like “sorry brah I’ma blenderize the other 50% too, deal with it.”

The problems were there already. I’m not talking myself out of this. I just… I do wonder. If I did convince him to go to couples therapy with me, what would happen? Is it possible I’d be like “holy shit I just made up a whole-ass narrative in my head over the last 3 years of not talking to him, and holy shit maybe he IS capable of giving me what I need and forming an emotionally meaningful relationship going forward?”

Whatever the fuck good that does me, lol.

Alright, sorry I’m back to my old verbose self even though my life continues to be empty of Things Happening.

I LOVE YOU ALL GOODNIGHT.

The Darker Sooner
by Catherine Wing

Then came the darker sooner,
came the later lower.
We were no longer a sweeter-here
happily-ever-after. We were after ever.
We were farther and further.
More was the word we used for harder.
Lost was our standard-bearer.
Our gods were fallen faster,
and fallen larger.
The day was duller, duller
was disaster. Our charge was error.
Instead of leader we had louder,
instead of lover, never. And over this river
broke the winter’s black weather.

That connection stuff doesn’t seem unreasonable to want. If anything, it kinda seems the point.

I don't think it's just that you're living together, it's just that the situation you're in has highlighted what was already missing. As it has for a lot of people in relationships.

Your screaming advice to yourself is great advice, I will scream it at myself too! <3

RE: Wanting Things. I can remember thinking with MCG that I never would have found him if I’d settled for MG. MG was great, and he was loving and nice and all that jazz, but if I’d settled for nice, I would never have found that organic chemistry, the spark, and the adventure that I found with MCG. Toward the end, when things weren’t great, I kept reminding myself that I was still settling. For a partner who wouldn’t do the dishes or hold up his end of household chores, someone who couldn’t remember something I asked of him moments prior, etc. etc. And if I had settled for MCG, I’d never have met Ginger (or fucked all those dudes in between). So. Yeah.

So my Sister and her dude moved in at the start of the pandemic and have been having problems too (obvs) and I think it’s totally fair to say that if you DO want any hope of salvaging it, why not try therapy? Like. Then you can say that you did try everything. And maybe it’s the quarantine, like, normally I hate everyone too (I’m not sure how Ginger and I are doing so well...we don’t talk a whole lot, so maybe that’s it??), so I totally get that being forced to be together for ALL OF TIME is not ideal. But. Also. If you’re over it and you don’t care if it works out, then don’t bother with therapy. Sometimes it is what it is.
(Basically I guess there’s no wrong answer?)

It’s not just these last 2 months of living together, though. You’ve been struggling with the disconnection for a long time.

But I do understand being compelled to make SURITY SURE. He’s been a deeply important person to you despite the struggles. So that makes sense.

Are you able to be alone somewhere outside of the house? I know that’s not the same cuz it’s not Your Space but maybe chilling at a park with a book or your laptop could help skim off at least a layer of the tension? I’m having difficulty with this too. The way the Viking’s and my work schedules aligned, I always had a day alone and a day with him, but my schedule changed so now we share the whole weekend. LOVELY IN THEORY except I really miss that one day to just introvert up a storm. When I realized, oh god, I will never be alone again, I kind of had a mini crisis, ha. So yeah, I definitely get it.